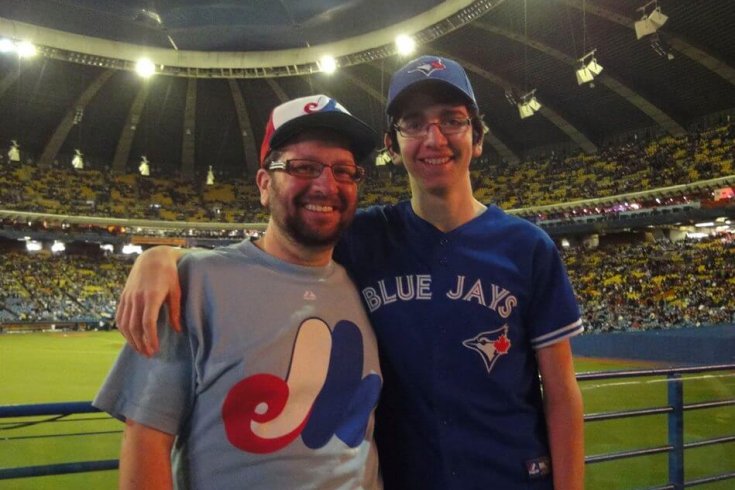 The author with his son at Montreal's Big O.

“You know things are weird,” my old friend Steven Morris said to me, “when you’ve got 50,000 Montrealers cheering a team from Toronto.”

It was March 2014, and were sitting in the bleachers at Montreal’s Olympic Stadium, watching the Blue Jays play the New York Mets in their last spring training game of the season.

I grew up in Montreal, a hockey fan like the other kids I knew. But baseball gradually started to grow on me. The radio became a constant summer companion, with the voices of Dave Van Horne and Duke Snider calling the Expos games. By the time I got to high school I was skipping out to the Big O on opening day, and listening intently (and surreptitiously) to the radio on Blue Monday—when Rick Monday of the Los Angeles Dodgers dashed the Expos’ post-season hopes in 1981.

My first date with my wife started off with us sitting in the bleachers at an Expos game. I was in the cheap seats when Pete Rose got his 4,000th hit (1984) and when Curtis Pride hit the double of his life (1993), causing the place to explode with a mighty roar that Pride (who is deaf) could only feel, not hear. And one of the last things I did before moving from Montreal to Halifax in 1998 was head to the ballpark with Steven.

Later, busy with a new freelance career and young family, baseball stopped being a regular part of my life. When the Expos decamped for Washington, all I felt was a sad inevitability.

Now, here I was back in the Big O, sitting beside Steven again, only this time with my fourteen-year-old son Eli along too. And we were cheering for the Jays.

Eli is the one who brought me back to baseball—to following the Blue Jays through the futility and disappointment of the last few seasons, and now the hope and joy of a magical summer, and a September that sees the team at the top of the AL East standings (as I write this, anyway).

Back in 2008, Eli started playing baseball, and soon he wanted to learn everything he could about the game. If he was ever on the fence about which team to back, then going to two Jays camps, meeting Roberto Alomar and having Jesse Barfield showing him clips from the glory days on his iPhone removed any doubt.

Cautiously, I came aboard. I’d always preferred the National League, but had no team that particularly drew me. (There was no way I was going to cheer for my former team, now taking the field in DC as the Washington Nationals) As Eli and I watched the Jays’ José Bautista chasing fifty homers in 2010, I became genuinely enthralled.

But it was a bit like arriving in a new country.

During my Montreal baseball days I barely noticed the Jays. Every couple of years they would come to town to play the Expos for the Pearson Cup exhibition game. I remember going to boo the team from Toronto.

Other than the World Series, I don’t remember ever hearing Tom Cheek, the legendary “voice of the Toronto Blue Jays” (1977–2004), call a game. Most of the team lore was lost on me. Shawn Green? Carlos Delgado? Roberto Alomar? These guys were names only, with no emotional connection. I had a lot of learning to do. And the Montrealer in me had to get over the sheer repugnance of cheering for a team from Toronto.

As my Jays fandom grew, baseball started taking over more of our lives. Eli and I both took up umpiring. In 2012, we took a family road trip to Boston to catch the Jays at Fenway Park. Last year—just a couple of weeks before we found ourselves at the Big O together—we went to Dunedin for spring training. Eli bought me an R.A. Dickey shirt so I could have a piece of Jays gear; I wore it along with my Expos cap.

There’s been a kind of comfort in following the Jays. The off-season excitement followed by a dawning sense of futility was certainly familiar, as were the fans who would talk up the team and then dump all over them as being unable to win as soon as the early hope began to fade.

Back in April, after the Jays lost a series to the Rays, Steven emailed me to say, “Was hoping the Jays would win the 3rd game in Tampa. Alas…But they do feel a lot like the old Expos—young, reckless and exciting. Am slowly getting into them this season.”

Several years into the Jays incarnation of my fandom I’ve read books by Dickey and Green. I’ve exchanged pleasantries with Marcus Stroman. I’ve watched the wildcard standings in September, clinging to any last hope that the team might make it, and then felt the approaching emptiness of a winter without baseball. I put on my Dickey shirt every five days or so in anticipation of his next start. I even catch myself feeling like the long-suffering fan who has earned the joys of this summer.

But of course, I also remain a newcomer. And part of me wonders if I’m only here temporarily.

Let’s face it, I wasn’t just back in Montreal to cheer on the Jays. The Montreal Baseball Project, a group led by former Expo Warren Cromartie, is pushing hard for the return of Major League Baseball to Montreal, and Mayor Denis Coderre is a strong supporter. I was in the stands partly to help send Major League Baseball a message—that if over 90,000 of us could turn up for a two-game spring training series, we were sure as hell going to turn up to watch the Expos 2.0, whether they came in the form of expansion or relocation.

So yes, I’m excited as hell about the possibility of October baseball in Toronto. There is so much to love about the team Jays general manager (and former Expos employee) Alex Anthopoulos has put together. But I’m also the guy who cried as I drove over the Jacques Cartier bridge while listening to the tribute to Gary Carter at the Big O, who wears an Expos cap and jacket with pride, who will tell anyone who wants to listen that it was ownership and bad luck—not just fans—to blame for the Expos’ demise.

I bought the MLB.com At Bat app this year, which allows you to listen to live audio streams of any game. In June, when the Jays were playing the Miami Marlins, I tuned in to the Miami play-by-play.

It felt strangely comforting almost immediately, and I had no idea why. I finally realized understood my feeling when one of the players cranked a home run. I heard, “That ball is up, up, and away!” and realized the man calling the play was none other than the same Dave Van Horne I listened to all those years ago. Fifty years after he first got behind a microphone, he’s still in the game.

I still am too—cheering for one team, while my heart still aches for another that’s gone and may never return.

Philip Moscovitch (moscovitch.com) is a regular contributor to Saltscapes and Halifax Magazine, and his documentaries have been broadcast nationally on CBC Radio.