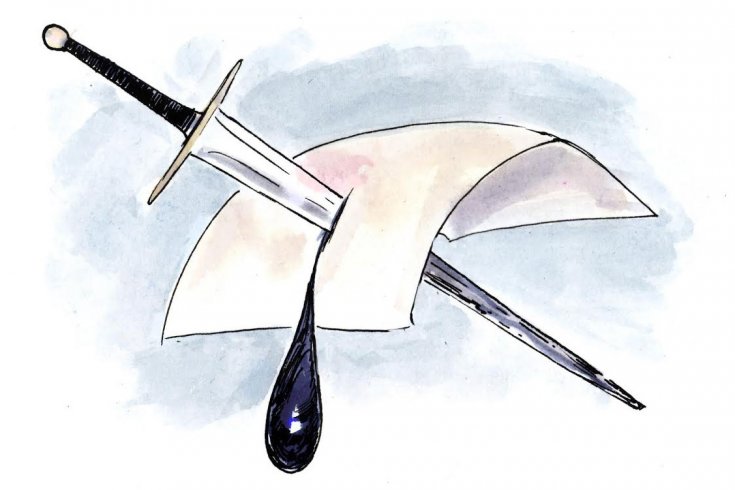 Ink is a ubiquitous substance, “so common,” writes Ted Bishop in The Social Life of Ink, that “it is invisible.” Struck by an idle question (now forgotten) while sitting in a rare book library, he asked the curator to direct him to a volume about ink. There wasn’t one: oddly enough, the substance that for centuries has documented all of our histories had never had a record of its own. So Bishop, an English literature professor at the University of Alberta, decided to write it himself. He figured the whole thing would take about a year to toss off. One year stretched to five, with research leading him from Texas to Tibet, Argentina to Uzbekistan, as he traced the many ways this unruly liquid has influenced the course of human communication and culture. “Writers,” he adds, “notoriously dream up whole books at the bus stop that take them the rest of their lives to complete.”

Bishop was already thinking about ink, and the curious power it holds over us, in Riding with Rilke, which was shortlisted for a 2005 Governor General’s Literary Award for non-fiction. As a young scholar doing research at the British Museum Library, he recounted, he felt “a physical shock” upon realizing he was holding Virginia Woolf’s suicide note to her husband. Bishop had read the transcribed text dozens of times, but seeing the original marks on the page was “a connection that collapsed the intervening decades. This note wasn’t a record of an event—this was the event itself.”

For millennia, ink has recorded human experience, setting down nations’ constitutions and capturing the fleeting passions of lovers. If you could not bring yourself to say something out loud, you could always put it on paper. Ink allows humanity’s myriad ideas and histories to be passed from one generation to the next, like a baton in a never-ending, species-wide relay race. Even as we march inexorably toward an all-digital world, many of us have, as Bishop writes, “faced the Blue Screen of Death” on our laptops, horrified at the prospect “that everything [we’ve] done can vanish in an instant.” Writing with ink remains “a way to cheat death.”

Its use is also closely tied to notions of originality and authenticity. The invention of the printing press may have forever changed the world in a good way, but by the 1930s critics like Walter Benjamin were anxious about what might be lost when works of art could be so cavalierly reproduced. Even compared with film and photography, Benjamin considered print a “particularly important case.” His concerns were prescient. Ink would also become a means for dilution: much of the ink we encounter today is not just an impersonal copy but garbage waiting to be thrown away. Too many bad books published too widely, too many flyers we didn’t ask for and receipts we don’t want. Bishop notes, quite rightly, that sending any document via a rinky-dink fax machine “seems to alter the very quality of the prose”—and not for the better.

When ink does get celebrated, it’s often in an attempt to reclaim the uniqueness and intimacy of some long-ago era: anyone can dash off a Facebook message, but if you want to show someone you truly care you pull out your pen and write them a tactile, one-of-a-kind letter. It’s also why one of the most cathartic scenes in the last two decades of film is in Office Space, when a group of disgruntled cubicle dwellers take their industrial-strength, perpetually malfunctioning printer to a field and annihilate it with a baseball bat. Ink (or toner for that matter) can perform many jobs, but when it’s not being used to its full potential, someone—or something—must pay the price.

The Social Life of Ink begins with the history of the ballpoint pen, a seemingly minor invention until you realize that it single-handedly allowed humanity to take ink for granted. Today, we access ink as easily and mindlessly as water from a tap. This is no small feat. In the years leading up to World War II, Western society was becoming increasingly writing intensive. Men and women were now expected to write cheques, sign order books, or jot down grocery lists on the fly. Hungary’s Laszlo Bíró came up with the idea of regulating ink flow via a tiny ball-and-socket mechanism; Milton Reynolds, an American “globe-girdling flim-flam promoter” helped create the market with a series of intercontinental publicity stunts; and France’s Marcel Bich purchased Bíró’s patent and co-founded Bic, the company whose name has been synonymous with ballpoints ever since. The sea change this trio introduced wasn’t met with universal acclaim, however. George Orwell made a point of having the traitorous O’Brien write with an “ink-pencil” in 1984—but once they rolled out the Bics, there was no putting the ink back in the bottle.

Here in the West, Bishop sees ink’s progression, from Gutenberg’s printing press to Bich’s disposable ballpoint, as fundamentally capitalist in nature, which has had the unfortunate side effect of alienating users from producers. (Bishop tries to combat this by having his ink-spoiled students attempt to make their own as an in-class assignment; one of the book’s recurring mantras, provided by a rogue ink maker in Provo, Utah, is “Scholarship Should Be Married to Craftsmanship.”) Things can be different in places like China, where some people still grind pieces of their personal ink sticks to create fresh ink each morning, and where one’s calligraphy is still thought to provide insight into one’s overall character. And of all the major religions, only Islam “makes the celestial pen part of its creation myth, of the world, inscribed before being, in divine ink.”

The basic recipe hasn’t changed much over the centuries. To make it, then as now, all you need is a pigment, a liquid (also called the vehicle), any number of additives, and something to bind it all together. “Don’t worry about precise measurements,” either, advises one expert. “This is cottage science.”

Within that formula, however, is a world of variety. For one thing, there are two types of ink, for printing and writing, whose consistencies are “as different as syrup is from water.” In both categories, creativity plays a large role—even though most commercial recipes are proprietary, so we don’t know exactly what’s in them. Visiting Texas A&M University, Bishop crushes charred sheep bones with some students, and later simmers oil with bread and onions, all in the pursuit of a particular shade of black. In China, he peeks into the smoke-clogged room where a special kind of soot is produced, collected, and then repurposed with a similar result in mind. One early recipe goes so far as to recommend using the “urine of an uncorrupt boy.” In fact, historians suspect one of the reasons Gutenberg’s ink has stood the test of time is because he went a little off recipe, adding some of his own pee into the mix.

Bishop asserts that the real reason Gutenberg’s name is synonymous with the printing press—despite the accolades, he didn’t actually invent it—is that the documents he produced were simply more beautiful. And that’s because he had the superior ink. We’ve all been seduced this way in bookstores, shelling out extra for a deluxe edition with type so rich it threatens to slide off the page. An eleventh-century guidebook from what is now Tunisia quotes the prophet Muhammad on the subject: “When the pens are good, the books smile.”

Bishop’s monograph belongs to the small but growing mini-genre called commodity biography, which views human history through single objects. The phenomenon is a recent one, with Mark Kurlansky’s Cod: A Biography of the Fish that Changed the World leading the charge in the late 1990s, and the unorthodox approach can shake loose pieces of the past that would otherwise get passed over. Biographies of the physical world (the Atlantic Ocean, coal), clothing (cotton, Chinese silk), and foodstuffs (corn, vodka) have populated the landscape so far, and Bishop makes a convincing case for considering the contents of the average desk drawer, too. After staring into the tip of my throwaway ballpoint from the University of Lethbridge for a little too long, reflecting on the effort Bíró et al. put into creating it, I started wondering what stories my stapler or pocket calculator could tell if given the chance.

The book concludes by considering the unlikely new life ink has been given in the digital age. “The internet,” Bishop writes, “credited with killing ink, has in fact revitalized it.” One side effect of the rise of computers has been to unwittingly emphasize the ways in which ink and paper are still superior (see the Blue Screen of Death). And thanks to the Internet, ink connoisseurship has become a public and collaborative pursuit, with the requisite message boards, video tutorials, and belligerent, all-caps comments that bolster any online community built around a single hobby. The market, too, has exploded, with new and experimental colour options, of which savvy online retailers offer samples for just $1.50 apiece. “Yes,” one ink seller laughs, seeing the parallels between his line of work and the drug trade, “people call me a pusher.” But how else are you going to know whether Cosmic Cobalt, Black Magic Blue, Bleu Myosotis, or Lake Placid Blue is the hue for you?

Still, the role of ink is shrinking, with nearly a quarter of all book sales having already migrated to ebooks, to name just one example. As many technology evangelists predict, North American workplaces may well be moving toward the so-called paperless office, where cloud computing and electronic signatures rule the day. But until I stop seeing that telltale disclaimer at the bottom of every corporate message in my inbox—Please consider the environment before printing this email—it’s clear we’re still a long way off.

Michael Hingston (@mhingston) has written for Wired, the Guardian, and The Walrus. He edits the Short-Story Advent Calendar.
Graham Roumieu