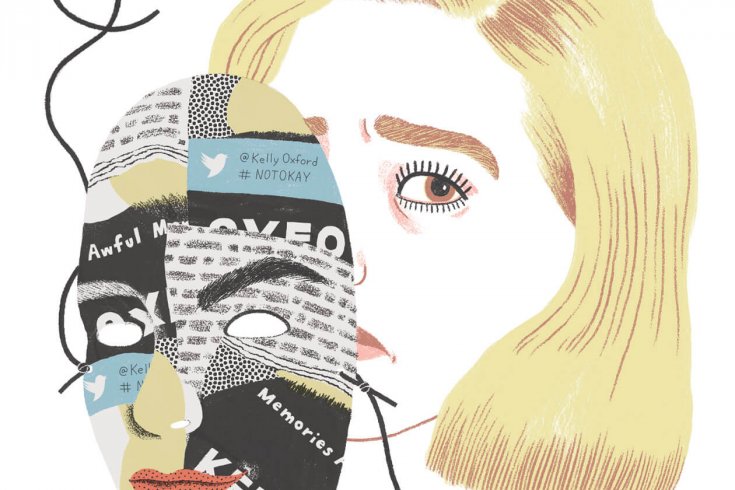 It’s the second day of summer camp, and eleven-year-old Kelly Oxford has already lost most of her hair to a DIY perm, pretended to be a drug addict, and been snubbed by two boys. During this fresh education in youthful ruthlessness, she finds herself bonding with an unlikely ally during arts and crafts: Adam, the resident bully. He’s moulding a papier mâché mask onto Oxford’s face while counsellor Geoffrey explains this tender activity.

“What does that even mean, man?” Adam asks.

“Well, we all wear masks. What’s yours?”

After joking with Adam that the inside of Geoffrey’s mask is probably really sweaty, Oxford admits that hers would likely be “black and gross.” Despite Oxford’s confident demeanour, listings of personal weaknesses constantly interrupt her inner monologue: hypochondriac, judgmental, highly sensitive, controlling. “I joked about this, but I knew it was true,” she writes. “I didn’t like a lot of the things I thought and did, and that was very confusing.” Moments later, she admits that leaving the mask on forever and painting “Fuck off” on the outside would be preferable to dealing with the emotions and hormones whirling inside of her.

However, she soon realizes that the mask has actually become stuck. In a moment of panic, Oxford tears it from her face. Her eyebrows come off with it.

As someone who helped create the roadmap to success for social-media comedians, Oxford knows a lot about presenting a crafted outward image to the world. She turned her hobby of writing funny tweets into jobs in Hollywood and, now, books. Her newly published second collection of essays, When You Find Out the World Is against You,is replete with stories such as those about her camp misadventures, all drawn from her life and presented in a sitcom-esque style.

But with Oxford once again translating her anecdotes from 140 characters to 300-odd pages, one wonders: What exactly is the point of writing memoir when everything can be (and is) shared immediately through social media?

In 2009, Oxford began tweeting to supplement her mommy blogging—mostly sharing quips about her life as a stay-at-home parent in Calgary. She found an audience, and by 2010, was a veritable online celebrity. Jokes such as “Does this glitter in my cleavage make my childhood look traumatic?” and “Babies are the original terrorists” showcase the kind of brash humour that garnered her more than 750,000 followers on Twitter.

Oxford presented the image of a woman—more than that, a mother—daring to be unlikeable. Roger Ebert called her a “fine sardonic wit” and later helped her acquire a United States visa when she moved to Los Angeles to further her career.

Her best-selling first memoir, Everything Is Perfect When You’re a Liar, was released in 2013, and its wit silenced skeptics who might have questioned a Twitter personality’s ability to write at length. Yet her stories lacked the vulnerability that characterizes a good memoir. On the surface, tales of self-administering enemas, deceiving the Salvation Army, and vomiting on multiple humans might appear to reflect unvarnished honesty. They involved seemingly intimate (read: embarrassing) details, but in fact betrayed very little.

The stories were strategically dispensed self-revelations that only reinforced the image of Kelly Oxford that readers had already consumed online. Many moments were left entirely unpacked, such as those in a story about the first time she had sex with her future husband. Doing the deed in an Edmonton park at night, the two were interrupted by passersby who, because of Oxford’s short hair, mistook them for a gay couple—and then started throwing rocks at them. It’s a funny story, sure, but she missed an opportunity to explore the fact that her relationship with her husband ostensibly began with a hate crime.

Oxford’s new collection is marketed as more of the same. But while both books rest on the sarcastic character she’s developed over social media, When You Find Out the World Is against You finds her experimenting with sincere introspection. She moves beyond elongated one-liners and reveals thoughts that might not prove especially retweetable.

In “On Boys and the Body Shop,” Oxford admits to being scared of her teenage daughter, Salinger, who can see directly through her smokescreen of jokes and pick up on her anxieties: “She is so much more willing to engage with her feelings than I was at that age.” In “Keeping Score,” Oxford expresses guilt for having uprooted her kids and moved them to Los Angeles in order to follow her own career dreams (“Every incessant honk fest or whiff of street urine triggers thoughts of Oh, this is my fault or This wouldn’t happen at home”). She discusses being devastated by the death of a family friend in “Good Guy Gone,” while also complaining that the funeral is scheduled to occur on her birthday. In that essay, she admits that “deep down I need everything to be perfect”: she is no longer the blasé narrator from her first book who boasted that she didn’t care about achieving an ideal life.

These relatable moments show the reader an Oxford who struggles with complex emotions instead of simply playing easy ones for laughs. They also offer a glimpse behind her social-media mask; as she predicted, she is rather “black and gross,” but also refreshingly sincere.

There’s no right way to tell your own story, but some are certainly better than others. Justin Halpern’s Sh*t My Dad Says (2010), like Oxford’s first book, was breathlessly funny, but lacked substance. Rob Delaney, on the other hand, dived headfirst into his struggles with alcoholism and depression in Rob Delaney: Mother. Wife. Sister. Human. Warrior. Falcon. Yardstick. Turban. Cabbage. (2013) and managed to be hilarious and reflective at the same time.

To grow as a memoirist who started on social media, Oxford had to learn how to play to the strengths of each medium. Take, for example, a typically Oxfordian tweet, this one from 2014: “The loudest drunks are groups of sober teenage girls” (760 retweets, 1,404 likes). It’s short, funny, and shareable. It also serves as inspiration for “On Boys and the Body Shop,” which delves into the challenges of discussing dating with her young daughter. Looking back on her own teen years, Oxford writes:

My family was a nuisance, their plans always getting in the way of my very important sleepovers or trips to the mall. My friends and I needed plenty of time to obsess together over boys, and when my dad couldn’t get me to school early enough for me to walk down to the gas station and have those deep, meaningful, obsessive conversations before the first bell rang, it was the end of my little junior high school world . . . the loudest drunks are groups of sober teenage girls. They think all their jokes are hilarious. All their drama is the biggest deal in the whole wide world.

Suddenly, teenage girls aren’t just caricatures—they’re complex humans going through a phase of extreme self-centredness as a means of growing up and detaching from their parents. Readers are invited to laugh, but also to recognize themselves.

In the lead-up to the 2016 US election, Oxford strayed from her typical “jerk mom” online persona and finally risked doing something politically substantial. When a tape of Donald Trump joking about assaulting women was released, Oxford started the #NotOkay movement on Twitter by asking others to share their own experiences of assault. She started it off with an account of the time she was groped by an elderly man on an Edmonton bus when she was twelve. Thousands of other women responded with their own stories.

The description of the #NotOkay campaign closes out When You Find Out the World is against You. It’s a piece that doesn’t feel out of place, even though it lacks the usual quantum of humour. It serves as proof that in her sophomore effort at memoir, the author, sans mask, is now face to face with her readers—an act that, funnily enough, makes it easier to like her all the more.

This article originally appeared in the May 2017 issue.

Shannon Tien is a writer whose work has appeared in the National Post, Maisonneuve, Hazlitt, and the Globe and Mail.
Emily Taylor

Emily Taylor has created art for Subway and Corporate Knights.