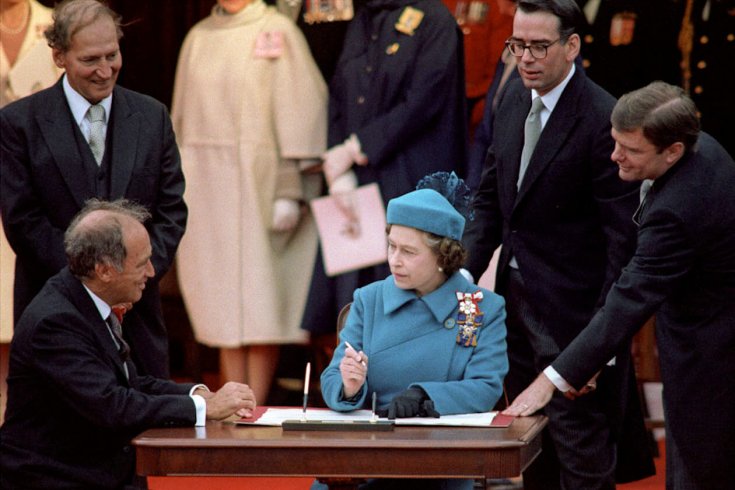 Thirty-five years ago today, Queen Elizabeth II signed the Constitution Act, 1982. A flag-waving crowd gathered on Parliament Hill to watch. Prime Minister Pierre Trudeau sat to the queen’s right, looking delighted, and two tall men stood to her left—one pinning the pages down as if to stop them from floating away. The document was important enough to be protected by an extra hand: once signed, it would empower Canada to amend its own Constitution without approval from Britain, and enshrine the Canadian Charter of Rights and Freedoms as the supreme law of the land.

In the years since, the Charter has become iconic. Canadians rank it as the most important symbol of our national identity—ahead of even hockey. It is well known for its role in cases like Morgentaler (which abolished a criminal prohibition on abortion), Egan (which banned discrimination on the basis of sexual orientation), and PHS Community Services (which prevented Ottawa from shuttering Vancouver’s safe injection site). In short, the document has made an already liberal nation that much more liberal—cementing Canada’s commitment to individual autonomy, equality, and social justice.

But the Charter has also had undemocratic consequences. Under it, Canada’s legal institutions have assumed considerable political power while our elected representatives have shied away from using the tools that the Constitution’s drafters granted them. More than three decades into its existence, the Charter has changed the relationship between Canadian politics and the law—and not necessarily for the better.

In its infancy, the Charter was something of a blank slate. For all the words it contained—its explicit guarantees of free expression, religion, association, and the like—the document raised more questions than it answered. What did “expression” mean, for instance? Did it include hate speech or only “worthy” speech? What did “religion” encompass? Did it mean only organized religion or anything that a person chooses to believe?

To such questions, the Court faced the formidable challenge of producing answers. And it was keen to ensure that Charter rights did not suffer the same dismal fate as those contained in the 1960 Canadian Bill of Rights, which judges had interpreted very narrowly and rendered essentially useless. Thus, the Court set about construing Charter rights liberally, while granting the courts significant say over when those rights could be limited.

“Right out of the gate, [the Court] decided they would give a broad, purposive interpretation of the rights themselves,” says Emmett Macfarlane, a political science professor at the University of Waterloo. In effect, the Court made it relatively easy for claimants to establish a breach of their Charter rights and let the more difficult analysis take place after, under Section 1—the provision that permits government to limit Charter rights if it can show the infringement is reasonably justified.

The so-called Oakes test that the Court developed for this Section 1 assessment has given the courts significant latitude to engage in policy analysis—requiring them to weigh the importance of government objectives and consider their impact. For reasons of both institutional capability and democratic legitimacy, this judicial influence over policy can be problematic. As Macfarlane observes: “The fact of the matter is that the Court is routinely involved in complicated moral, policy, and philosophical questions that judges aren’t really trained to do. They’re lawyers, trained in the law. They don’t have the policy expertise to answer the questions that the Charter puts before them.”

We once would have expected our elected leaders to implement their vision of a just society. Today, we have become comfortable with judges fulfilling this role.

The 2005 decision Chaoulli v. Quebec is one of the most famous cases in which the Court settled a question of enormous policy importance. A Quebec resident challenged provincial legislation that prevented him from purchasing private health care insurance, claiming it infringed his Charter right to “life, liberty, and security of person.” The Court waded through a mountain of evidence and, by a narrow majority, ruled that Quebec’s restrictions on private insurance weren’t justified—not when the province was failing to deliver public health care in a timely fashion. Regardless of where one sits on the health care debate, it’s easy to appreciate how nine judges—tasked with considering only the claimant’s plight and the evidence submitted in court proceedings—might lack the expertise, information, and resources to make informed decisions about the whole of a province’s health care system.

And yet, these are precisely the kinds of policy matters the courts now routinely decide. The Charter right at issue in Chaoulli—the Section 7 guarantee to “life, liberty, and security of person”—has been at the centre of “some of the most contested political cases in Canada,” writes Peter Hogg, Canada’s leading constitutional law scholar. It has covered everything from abortion, to assisted suicide, to prostitution, to national security, and it’s at the heart of a current challenge to British Columbia’s ban on private health care—a Chaoulli redux. Charter critics on both the left and right have “decried the shift of policy-making away from the elected, accountable, legislative bodies and officials and over to the unelected and unaccountable judges” that has occurred under this provision, Hogg adds.

Because the Court has said the “words (of Section 7) cannot be given any exhaustive content,” it is hard to predict what the provision might be stretched to embrace in the future. The Court has not ruled out the possibility of this provision guaranteeing social or economic rights—such as a right to a basic income. Libertarians have advocated its use to protect property rights—an idea the Court has rejected to date but could yet accept. Environmentalists also strategize about advancing the right to a healthy environment under it. Since the actual text of the Charter doesn’t have anything to say on these issues, we are left with judges making decisions on the basis of their “personal conception of what is just,” says Macfarlane. At one time, we would have expected our elected leaders to implement their vision of a just society; indeed, we would have elected them on their promises to do so. Today, we have become comfortable with judges fulfilling this role.

While the courts’ political influence has risen during the Charter era, our political institutions’ powers have dimmed. Politicians will sometimes grumble when judges strike down their laws as unconstitutional (such as the Harper Conservatives’ testy response to rulings that neutered their tough-on-crime agenda), but they rarely push back against Charter rulings—despite having the authority to do so.

Section 33 of the Charter permits Parliament or any legislature to declare that a law operates notwithstanding various Charter provisions. Howard Anglin, executive director of the Canadian Constitution Foundation (CCF), points out that Section 33 was a critical part of the compromise that resulted in the signing of the Charter: “You wouldn’t have got the provinces on board without it.”

Today, politicians treat the provision like anathema. “We talk about Section 33 like it’s an ‘override’ provision; like it’s not even part of the Charter,” notes Macfarlane. “Yet it was deliberately put there out of recognition that the courts wouldn’t always get it right. It wasn’t a simplistic attempt to preserve parliamentary sovereignty with no reason.” Contrary to what much of the public has been led to think, then, it is not necessarily inappropriate for government officials to push back when they believe a court gets a ruling wrong; this is as legitimate as a citizen asserting her Charter right to justify some action. Of course, the government would simply need to make a compelling case for why such an action was justified—such as explaining how a court’s policy analysis failed to take account of relevant considerations or contravened the will of the democratic majority.

Politicians also tend to throw up their hands as soon as the Court says the Constitution must be amended before some promised action can be taken (such as Senate reform or national-securities regulation). Indeed, few things are as sure to shelve a political party’s reformist ambitions as the spectre of constitutional negotiations. Given that one of the signature achievements of the Constitution Act, 1982 was to empower Canada to amend its own Constitution, this legacy is ironic. It’s also unduly defeatist.

Canadians do not view the Constitution as “embodying immutable rights,” says Anglin, pointing to a recent CCF survey that found that Canadians are anything but fixed against constitutional change. The problem, he notes, is rather a political one. The prime minister and premiers don’t dare to take action. They’ll say it can’t be done, that it’s impossible to get Ottawa and the provinces to agree to anything. They forget that the Charter’s very existence is the product of significant compromise—not to mention political ingenuity—by Canada’s federal and provincial leaders. Unfortunately, political imagination seems to be in short supply these days—at least among Canada’s politicians. The courts, on the other hand, evidently possess it in abundance.