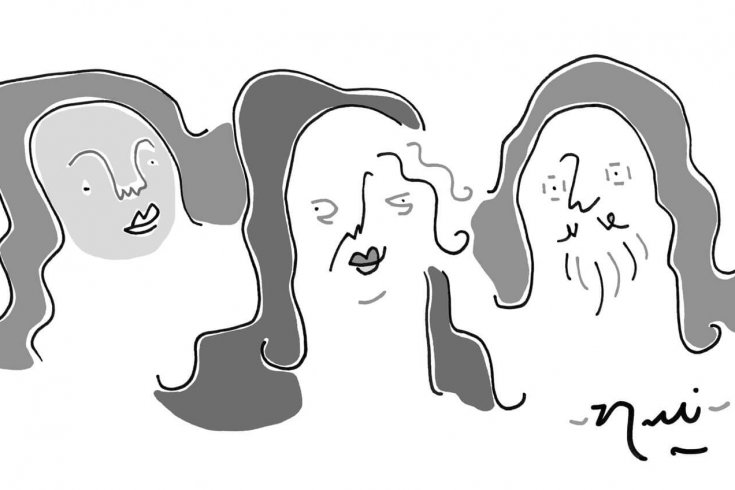 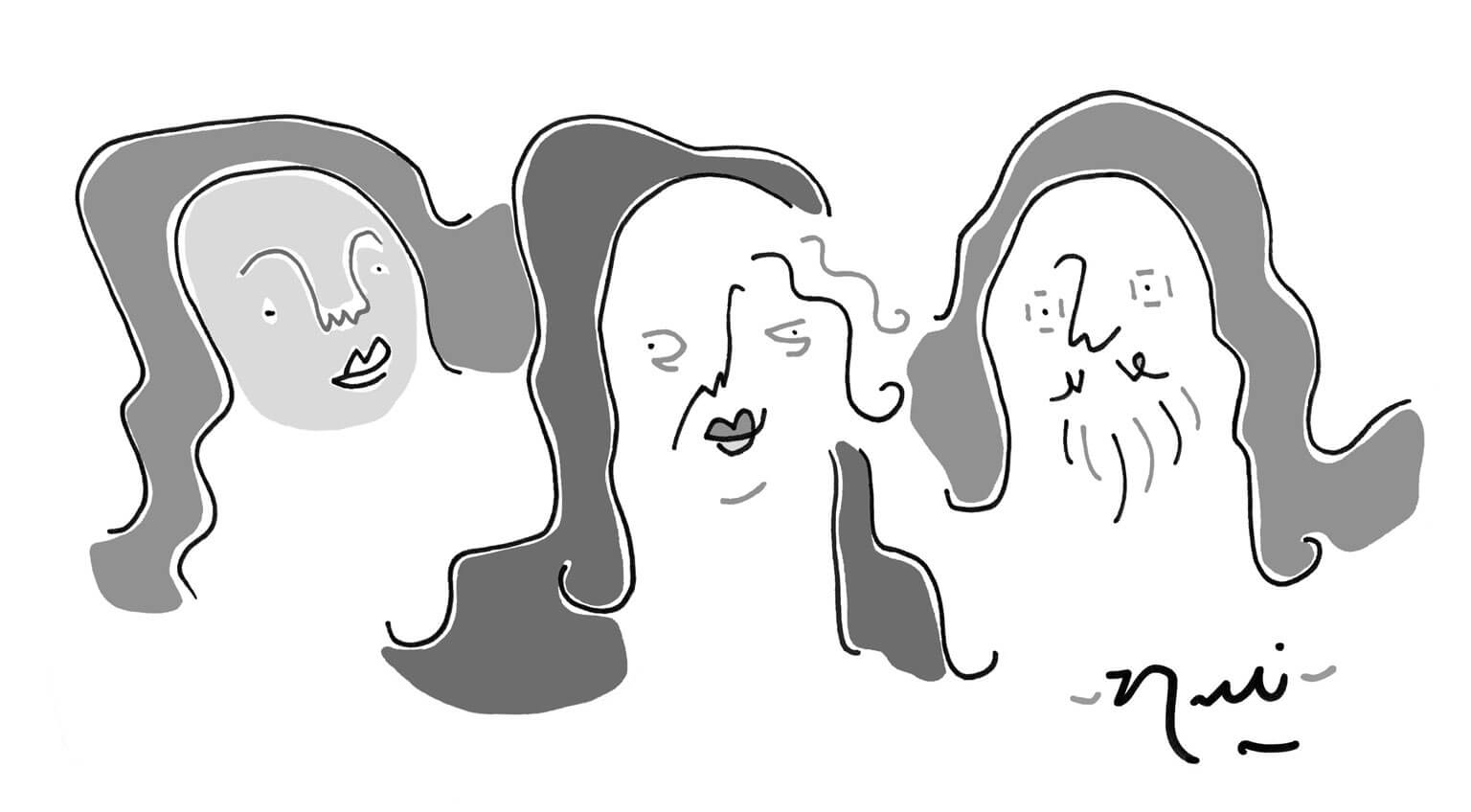 A six pack, fishing rod, a fistful of books.

I pulled the motor cord.

The fish weren’t biting. I cracked open Boring War and a beer. Bornholt was an idol of mine. A whiff of his fertility—my ambition, as a writer. My dream.

Fog on the horizon.

I might’ve closed my eyes.

The boat was slapping against something, scratching.

I stepped out of the boat. Heaved it onto the beach.

I walked into fog.

For a minute, I saw hills, trees. Then the fog rubbed them, like a gum eraser.

I followed them. I tripped a couple times. Cut my cheek on—something. Stayed down, at last, waiting for the fog to lift.

But it eased up, a little.

There were dozens of them. In a clearing. Coming, going. Carrying firewood. Tending a fire.

I stood up. Took a step.

A woman turned her head. Dropped her firewood. Screamed.

Then everyone was screaming. Covering their ears. Running towards me.

I took a step back, and tripped on—something.

“Onviblio,” said the middle face. A woman. An old woman.

“Where you are.” An overripe man. With a goatee.

I looked around. Stone walls. Candles. A cavern.

The people. They were wearing robes. Gray robes. Woolen-looking.

Their faces. They were three different people, but . . . Identically sad. It seemed.

The old woman touched my hair. Smoothed it, like a child’s.

They talked me into staying. Until the fog lifted. Amelia (the older woman) brought me a robe. My clothes were soaked.

“We make them out of flossa—the wool of a rumino.”

After I changed, she took me outside. Pointed . . .

I thought she grimaced.

I scratched myself. The robe was itchy.

Deelon—he was a year older than me—showed me around the island.

“It’s not too big. You can walk one end to the next in a day, just about.”

“Anyone ever climbed it?”

Deelon stopped. He looked me in the eye.

“Don’t be thinking of that. Don’t be going any higher than this.”

We hiked another mile.

Deelon bent over. Pointed at a red flower.

“We dry the roots, for spice. Hotter than jerk chicken.”

He stood up. He looked ill. He took my hand.

He seemed to be.

We made our way back to the cavern.

Someone was playing the drums.

There were—it was hard to guess, how many people. With the fog. They were drinking out of coconut shells. Half-shells.

Cristofori (the overripe man) was dipping the shells in a bowl of . . . It looked like fog.

“The milk of paradise,” said a grinning guy.

Cristofori killed the grin—with a glance. Then passed me a shell and said:

I took a drink. It tasted like ammonia. I took another drink.

A face came out of the fog. A lovely one. Violet-eyed.

“Wouldn’t be the first time,” I said.

Remember what, I would’ve asked her. If she hadn’t said—

She emptied her shell.

She stepped into fog.

Someone tapped my arm.

His eyebrows jumped up.

It wasn’t far to the beach. I followed the sound of the water.

I practically stepped on a few people. Having sex.

The beer was still there. Thank god.

I grabbed the books, too. And followed the drums back.

He dropped to his knees.

Screams. Everywhere. The loudest were from the violet-eyed girl. She grabbed hold of her skull, like a wobbled vase. Then fell over.

Cristofori bent over her. Then looked up.

I leaned on a tree.

Everyone was looking at me.

Amelia­ reached through the bars. She grabbed my hand. Smoothed it, with her thumb.

In the chair across from my cell, Cristofori watched me, cross-armed.

His eyes were on fire.

We didn’t reach the peak until noon, on the third day. Deelon and I . . . I don’t think we’d said a word to one another, up to that point.

Amid stone, a door. With a knocker. Deelon lifted and dropped it three times.

“Who lives here?” I asked him.

He closed his eyes.

“The only One. Who can speak of these things.”

“You’d best be saving those questions. For Him.”

The door opened a crack.

A narrow corridor, of stone. A throat.

“Come,” said the echo of a voice. I followed it.

A dim chamber, thick with fog. Candles blinking like stars.

There was an old man. Bearded to his knees. Sitting on the stone floor. Smoking—I didn’t recognize the smell. But the pipe was ivory. Or bone.

He took it from his lips.

It felt good to sit.

I slipped off my backpack, opened it. Unwrapped the jar of nemoria.

He took it indifferently. Sat it at his side.

And then I gave him the books.

He thumbed through them, just as cool. Then stood up. Walked to a trunk. On the far end of the room. Reached through his beard and pulled out a key. Unlocked the trunk, and dropped the books into it. Then locked it again.

I didn’t mind the loss of the other books so much, but the Bornholt . . . It was a first edition.

The old man sat back down.

“Mortonstone,” he said. “Do you know the name?”

He looked me in the eye for a long time. An hour.

The room was so smoky, now. It was hard to see.

“Where are you?” said the old man.

“A mountain,” I guessed.

He laughed again. Then leaned forward.

It was quiet a long time.

The room shook. Thunder. And then I thought—

I could barely see the old man, now, for the smoke. But I thought he nodded.

“What will happen? If it erupts?”

“It will be as if we never even existed.”

I wanted to say something. But there were no words. None.

“It has happened before. Many times.

“Or this would be an island of graves.”

I grabbed my head.

The old man vanished. But the nemoria jar appeared, with his fingers around it. It was open.

I took it. I drank some.

I drank some more.

I drank all of it.

I was sitting on the rocks. Watching the fog on the water.

A man stepped out of the fog and the water, and fell. Then he crawled up the shore. He was naked.

I ran to him. I helped him up.

Don’t even think about it.

I try not to think. To remember.

I can barely remember.

I still have the last bottle of beer. I’m saving it. I’m not sure for what.

There’s a million ways of getting here. But one destination.

We all end up here, one day.