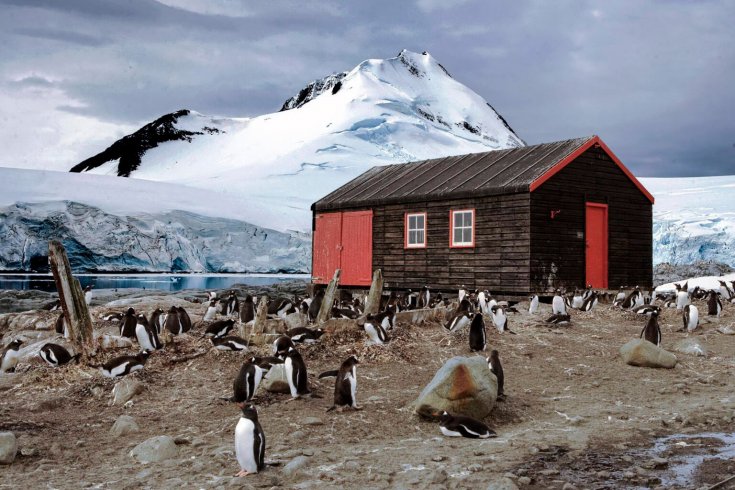 Port Lockroy’s incoming base commander, Elliott, and I stand in our parkas on a rocky outcrop, surrounded by over a hundred Adélie penguins. Penguins—or rather penguin guano—smells like fish and rotten hay, with a fringe of chalk thrown in to dampen its worst effects.

“It’s the ammonia.” Elliott sniffs. “But after a few days we won’t smell it anymore.”

The guano is a pale green, like the mucus of a thick cold. It is smeared across the rocks, making them more slippery than if they were covered with pulverized banana skins. One or two people have already tripped and bashed their knees on the smooth hard stone.

“It’s a relief to smell something for a change.” I don’t say, I can’t believe you’re going to stay here for four months. That wouldn’t be helpful, and besides Elliott looks like someone who knows what he is in for.

Elliott surveys the exposed and isolated point which will be his home for the next four months, along with his two companions, Mike, a mountaineer still on a high from his recent successful ascent of Everest, and Liz the avid birdwatcher from Norwich, who will assume the title of world’s most remote postmistress.

The hut sits at the foot of a towering glacier. Approaching base from the ship, we saw it first as a speck, a tiny beacon painted the colour of cooking chocolate, with blazing red window frames and a tattered Union Jack fluttering on a toothpick flagpole. As we got closer we could see a multitude of small black forms, slick and glistening, like leeches or polyps, lumped all around the hut. These were the penguins, who we spied on through binoculars and who wiggled their behinds and sprayed green goo in response to our arrival.

Lockroy is a lonely place, dwarfed by regal mountains, surrounded by white loaves of hummocked glaciers that spill from them into the sea. The hut itself is like a piece of Lego. My eye is still accustoming itself to the gigantisms of the Antarctic. “I can’t get a fix on the size of things here,” I tell Nils, one of the scientists onboard, when we take a break from hefting boxes.

“It’s a problem of scale, fundamentally,” he says in his precise way. “Everything is too big, and too empty of anything human. It’s just the same as how humans can’t get a fix on the atom, visually—it’s not an issue of belief but of scale.”

During the Second World War, Lockroy was an important communications post, ferreting out the German submarines which slunk across the ice shelf edge. Now it is a live museum. Each austral summer thousands of cruise ship passengers are ferried into Lockroy to visit and buy memorabilia and stamps for postcards that will eventually make their way to their destinations, emblazoned with philatelic penguins and Edwardian heroes.

“They come just after their champagne lunches or bouts in the Jacuzzi. The women wear heels! And what do they find?” Elliott shakes his head. “Three nutters in a hut in the middle of nowhere.”

We had only a few hours to unload four months’ worth of stamps and provisions. Postage stamps turned out to be twice the weight of tinned mushrooms. We struggled on the slippery rocks in our bulky cold weather gear.

Pitching in is the first rule of the Antarctic, unwritten but sternly conveyed in a myriad of ways; almost nothing else about one’s behaviour or demeanour matters. You “muck in,” and with energy, otherwise you will be termed “slack” and risk being shunned—one of the many ways in which collective endeavour is privileged over personal preference in Antarctic society. A month before I might have been working at my day job as an editor sitting at a desk in London fielding manuscripts, but suddenly I’m wearing rigger boots and being winched aboard a cargo tender among seamen, ready to offload four months’ worth of provisions to an Antarctic base.

Once ashore we started emptying the tender, wending through the obstacle course of penguins, who took no notice of us, preferring to loll, squawking, on their stomachs on the pathways up the rocks. They looked like ice curling stones. We must have looked equally bizarre to them as we performed a waddling choreography of weaving and ducking, slipping on the guano, sliding dangerously close, and no one wanted to squish a penguin underfoot.

“We’re ready for our summer. Over,” I heard Elliott say on the radio to Base R. Elliott would report to the Base R communications manager every day, once in the morning and once in the evening, on the “radio scheds.” He grinned—that ecstatic, matchstick smile I would see so many times in the Antarctic, which burned so bright for a moment, before fizzing into a black, dazed awe.

Just as we were readying to head back to the ship the weather closed in. It started to snow, stinging flakes that seared our faces. A wind came barrelling down from the glacier and the sky darkened.

This was the first time I experienced a katabatic wind. The term is derived from the Greek word for descent. Katabatic winds are the only winds on the earth driven by gravity and not by the rotation of the earth. Born high on the ice sheet and pulled down toward sea level by gravity, as they accelerate down the ice cap and glaciers they gain velocity. One moment it’s windless and the next you’re knocked off your feet. These winds regularly flip Antarctic aircraft over like toys.

Captain David came on the radio. On the ship they’d had to take the tender out of the water and put it back on deck. It was rough for it to get through to us. “We might send the RIBs in,” the first officer said on the radio, referring to the Rigid-Hulled Inflatable Boats the British Antarctic Survey used for quick transfers. “That’s what they say but it’s too rough for RIB,” Elliott informed us.

We all huddled in the kitchen. We knew the ship’s officers were thinking about their schedule—we were expected the following day at Vernadksy, the Ukrainian scientific research station down the road, so to speak. We were already behind schedule and Captain David was thinking, no doubt, about the inconvenience of having twenty people stranded at Lockroy, waiting for a change in the weather which may or may not come any time soon.

We went to the window. We couldn’t see the ship. We peered through its snow-encrusted panes, watching as the slabs of glacier were eaten by mist.

Elliott began to tell us a story. Two years before, a French yachtsman had pitched up in Lockroy. He had sailed his yacht across the most treacherous seas in the world. He ignored Elliott’s warnings and went for a walk only a hundred metres from the hut. A moment’s inattention meant he failed to see the tell-tale mint blue seam in the snow. He fell into a crevasse.

“He actually died from head trauma,” Elliott informed us. “We winched him out within minutes. But he wasn’t wearing a helmet and he banged his head. Spring ice is hard.”

The VHF radio crackled to life. We heard the first officer say, “We’re sending in the RIBs.”

We said goodbye to the hut nutters and the penguins. I took one last look at the hut and the glaciers that surround it. They looked benign, like a pristine slope at a ski resort, with their fresh icing of snow. We were in a different realm now, I realized. The dangers of the sea would soon be swapped for those of land. Elliott’s story was a warning. Life was tenuous in the Antarctic, he was telling us, this joking, boisterous horde of polar ingénues. A second’s unawareness could kill us.

That night the three Lockroy staff would cook dinner on a couple of Primus stoves, huddled in the kitchen with their Tilley lamps as the only source of heat. They would bed down fully clothed on hard bunks with cold duvets. On the ship, meanwhile, we would have dinner in our finery, we would drink scotch in the bar as the ship’s doctor, Dan, administered his weekly pub quiz—being the quizmaster is part of the Antarctic doctor’s job description, a stipulation inherited from the days of Shackleton and Scott and their multitalented expedition doctors.

In the RIB we gripped the hard sides of the inflatable as we zipped through the waves. We wore no immersion suits and the third mate was careful not to hit a wave straight on. I was wet, although not soaked. I didn’t feel the cold.

Ahead of us the ship rose and expanded; as we curved underneath its bow its red hull and its superstructure soared overhead, the height of a six-storey building. My heart surged—that was how it felt, a wave, a rush, from inside the muscle itself, a heady brew of thrill and gratitude. I thought of Shackleton’s men, how they must have felt the same passionate admiration for the Endurance, which had conveyed them so faithfully to the bottom of the world, then to watch it be crushed. It would be like having your own heart smashed in a vice of ice.

The winch came down, hooked onto the RIB, and we were levered into the air, whole, and swung onto the aft deck. The ship felt more stable than a planet. It felt like home.

Jean McNeil is the co-director of the Masters in Prose Fiction at the University of East Anglia and author of Ice Diaries: An Antarctic Memoir.

If a Book Is Published in a Pandemic, Will Anyone Read It?