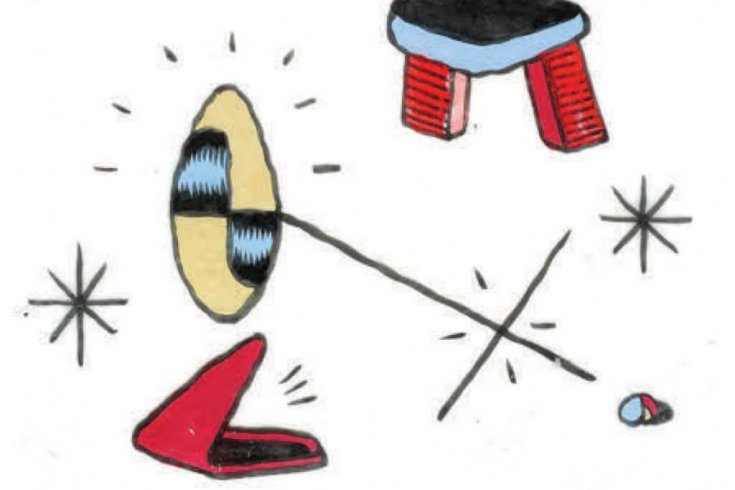 There’s a holiday in late December that I call Deadbeat Dad Week. It falls a week after Christmas, because that’s when gifts from absentee fathers show up in the mail. Deadbeat Dads send their parcels on December 24. They never have any idea what their kids want for Christmas. They just buy the most nifty, outrageous thing they come across.

When I was eight, in Montreal during the 1980s, my friend Stuart was sent a Great Dane puppy and needed a paper route to afford the dog food. Marie received a strobe light for the ceiling of her bedroom. Ted opened an enormous box and discovered a foot-wide tennis ball. Jean-Phillippe got the best gift: a megaphone. He stood outside repeating, “Step away from your vehicle,” to people getting into their cars.

Deadbeat Dad typically wears sunglasses and leather jackets. He has long hair, even though he’s balding on top. He rides a skateboard at age thirty-five. He’s fit, and is often spotted in the playground doing chin-ups on the monkey bars. When children are with Deadbeat Dad, they always feel in the flush of a new relationship. Everything Deadbeat Dad says is a riot. He does the most exciting things. He wrestles snakes! He eats shark! He runs into Ozzy Osbourne in bars!

Deadbeat Dad never has a steady paycheque. His excuses for this are epic, and should be published in pocket-sized form, just like those books of quotations from Oscar Wilde. Deadbeat Dad always claims that money is coming. He says he plans to open a massage parlour in the garage. He’s awaiting a court settlement from being bitten by a German shepherd in Detroit. He bought a painting at a yard sale that he’s sure is worth a bundle.

Deadbeat Dad thinks he has a calling. He has shoeboxes filled with demo tapes he recorded in his bathroom, where “the acoustics are awesome.” He has notebooks filled with ballpoint pen drawings of horses. He writes poetry on the back of paper placemats.

Deadbeat Dad likes to remind his children that they exist because of his marvellous genes. Thanks to them, his kids are good in sports, ace spelling bees, and land their first jobs at Dunkin’ Donuts. Deadbeat Dad acts as if his genes are the magic beans his children’s mother traded her future for.

Deadbeat Dad is always a little depressed. After all, he has time on his hands to wallow in self-pity. He’d never have time for existential dilemmas if he were actually raising his kids.

Deadbeat Dad gets arrested for possessing unlicensed firearms or disturbing the peace. He has issues with drugs and alcohol. He is a good time, with his video arcades, roller coasters, and Whack-a-Moles, but he is a stranger to his children. He doesn’t know their favourite books. He doesn’t know the name of the bully who teased his son in grade four. He doesn’t take his daughter out for dinner after she stars in her school play. He disappears for long stretches, during which children grow up.

Once his children are grown, Deadbeat Dad might come back to make amends. He wants to be close to his kids, like other parents. To this end, he uses “the apology.” Apologies are like flowers that bloom on the side of a cactus. They’re startling and lovely. Sadly, though, they are not time machines, and Deadbeat Dad cannot use them to travel back and show up at your eighth birthday party.

My daughter went to meet her biological father last year, just after Christmas. He said he wanted to give her presents to her in person. She hadn’t seen him since she was five. Back then, he’d disappear on week-long benders. He’d show up high as a kite to take her to the park. He’d entertain her with handstands and juggling and then fall asleep on a bench.

He stole my clothes and school books. He stole my television, guitar, and radio. I’d pass the pawnshop and see half my apartment for sale in the window. He never paid a penny of child support, and after years of begging and taking him to court I gave up. Ten years went by, and my daughter and I almost forgot he existed. He never came up in conversation. We were reminded of him only when the presents arrived at Christmas and on her birthday. They were good gifts: iPods, cameras, and other things I couldn’t afford.

My daughter wanted to meet him, and I couldn’t dissuade her. She brought her dog along, full of expectations. She was taken aback from the get-go. His front tooth was broken in half. He had a new girlfriend with him, who sat silently observing them. Circling his arm was a tattoo of a squid, which he claimed was his favourite animal. He was working as a bicycle courier and was still broke.

I asked her if she found that her dad looked like her.

“My God, yes. It was shocking! All the missing features!”

One of the burdens of single motherhood is letting children figure out the truth about Deadbeat Dads on their own. Maybe it’s for the best that my daughter writes her father off. Deadbeat Dads can never give you anything but shiny baubles and disappearing acts. It never pays to love them. One thing that’s true about all Deadbeat Dads is that they’ll break your heart.

A public shaming for negligent dads and moms

Many frustrated parents would like to collar and chip their elusive baby daddies/mamas, but the Ontario Ministry of Community and Social Services has the next best solution. In 2007, the ministry’s Family Responsibility Office started goodparentspay.com, a registry of dads (and, as of press time, one mom) who have defaulted on their support payments. Each offender’s name and picture is posted, along with known aliases and other distinguishing marks (e.g., Pegasus, Superman, and dragon tattoos). The site is intended to invite tips about the parents’ whereabouts, and, like sex offender registries, it serves to stigmatize the deadbeats who fail to come through for their kids.

Heather O’Neill published her second novel, The Girl Who Was Saturday Night, in April 2014.
Patrick Kyle