Of Free Speech and Fatwas | The Walrus
Skip to content 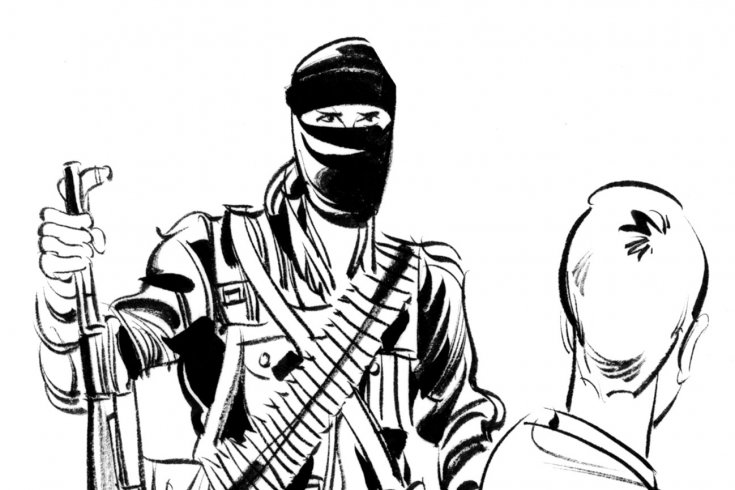 Artists and other cultural actors have once again been dragged to the frontlines of the war on terror by jihadi thugs who twist interpretations of Islam into justifications for revenging the prophet Muhammad and the Muslim faith. Or so it seems from the videos that captured two of these thugs in action on Wednesday—dressed in black, wielding Kalashnikovs, and yelling “Allahu Akbar” as they drove off into Paris’s eleventh arrondissement (the ensuing national manhunt has now become an armed standoff just outside of the city). On the frontline, four cartoonists and the editor of Charlie Hebdo were called out by name and executed alongside other colleagues with commando precision.

A disturbing reality is settling on France, indeed the world—a realization that this terrorist act was personal. Artists are on the hook, but are unbowed to these bandits from the new medieval Wild West. After all, this is the country of Sartre, of de Beauvoir, of Camus, of Hugo, of Zola, of Voltaire, of les droits d’homme. This is the country that published J’accuse to defend the framed Jewish army captain Alfred Dreyfus, and where moderate journalists and politicians went to the guillotine during the French Revolution rather than bend to the Reign of Terror’s demands on censorship. Thuggish bullying won’t stand, the French say, so move aside, Islamofascists!

Nevertheless, with this week’s massacre at Charlie Hebdo, familiar debates have re-emerged in France and throughout the world. Is Islam to blame? Are North African immigrants dangerous? How do we prevent the next attack? Should artists stop producing works that provoke such dastardly acts? Shouldn’t artists just respect religion? What about free speech and the right to say vulgar, insulting things to whomever we want?

I am among the historians of France and radical Islam who have studied threats against artists and intellectuals in Muslim-majority states, and within Europe, since the infamous Salman Rushdie affair of 1989. For us, this week’s terrifying scenes in Paris are nothing new. To be sure, such personalized attacks are new to the French capital—but not to Europe or to North Africa or to the Middle East. In fact, such assaults have become almost as predictable as the rage that sparks them. Consider Dutch filmmaker Theo van Gogh, who was shot and stabbed to death in an Amsterdam park in November 2004; Somali-born Ayaan Hirsi Ali, who collaborated with van Gogh and also faced assassination threats; or Nobel laureate Naguib Mahfouz, who survived an assassination attempt in Cairo in 1994. Literally hundreds of others, such as Egyptian Quran scholar Nasr Abu Zyad, have all found themselves, in this post-Rushdie fatwa world, curious allies—clumped together defending a modern, undefended front comprised of supposed offenders of the faith.

Meanwhile, armed with fatwas, dangerous jihadis charge forth to “avenge” the Prophet, Islam, or some narrowly defined rule of social conduct. A charge that positions them as the self-appointed guardians of “the truth” and moves them one step closer to the gates of paradise, because these misfits wield Kalashnikovs and shout “Allahu Akbar.”

Having traced the evolution of such fatwas for nearly two decades, I’m often asked by journalists and policy-makers how we, the democratic West, can defend ourselves against such a dangerous world view. The short answer: we should try to better understand how intellectuals and artists from Muslim-majority states have dealt with this issue for decades.

To make this point, I sometimes recall a 2009 interview I filmed in Amsterdam with the late scholar Nasr Abu Zyad (he died a few months later in 2010). In the mid-1990s, Abu Zyad and his wife were forced into exile after the Egyptian Islamic Jihad called for his head, because he had dared to offer hermeneutical and historical interpretations of the Quran. Before that, Egyptian courts nullified their marriage on the grounds that he was an “apostate,” arguing that his scholarship insulted Islam. Abu Zyad’s case caused an international scandal, and the end result was that he moved to Holland to teach.

Being chased out of Egypt weighed heavily on Abu Zyad, who was not only one of the world’s leading Quran scholars but a devout Muslim and a patriotic Egyptian. “It was terrifying for everyone,” he told me. When I asked him about comparisons made between his case and Salman Rushdie’s, he said the Satanic Verses controversy illustrated how “religious discourses in the Muslim world are so fragile that a novel would present a threat to an entire civilization called the Islamic civilization.” He believed that this was not the way to understand Islam, because Islam, as a major religion, has the capacity to withstand criticism. So did the prophet Mohammed, of course. Cartoons or novels should not distract Muslims from their faith. These are not threats to the Quran or the Prophet, he explained, because “thousands of books are written against Muhammad” just like “thousands of books are written against Jesus.” Yet all “these thousands of books did not destroy the faith.”

He continued, “Muslims should take this as a challenge, not as a threat. In case of threat, you immediately retaliate. In case of challenge, you have to think about what is said. Criticism of religion, or criticism of religious figures is something fundamental to the development of religious ideas.” Abu Zyad’s response to my question shows how devout Muslims can react to challenges in such a way that Islam actually “reconstitutes” itself more strongly. In fact, such challenges are necessary to keep Islam, or any faith, from calcifying. And that is a thing of beauty.

When considering the debate over the Charlie Hebdo cartoons—whether they should have been published in the first place, or republished now—I go back to Abu Zayd’s insights. His views represent a positive way forward, and suggest that thoughtful, critical Muslim intellectuals and believers have already decided that the images, though offensive and vulgar (let’s admit that they are meant to be), do not tarnish the beauty and power of Islam. No, cartoons don’t have this power, thankfully, and neither do other forms of art. And, fortunately, not even the young thugs who assassinated the Charlie Hebdo cartoonists can really claim to represent “true believers.” Bandits? Yes. Jihadists who have self-identified themselves as avengers? Yes. We can allow them this. But Muslims who are up to the challenge of thinking it through? That they are not. This, surely, is the next, essential step.