How Tobogganing Works in 2015 | The Walrus
Skip to content 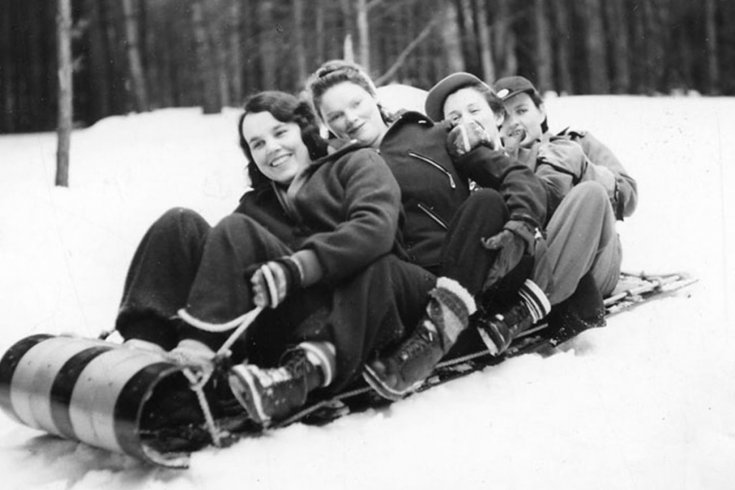 The front page of Monday’s National Post informed me that North American parks are witnessing a “war on the toboggan.”

“Dubuque, Iowa, is set to ban toboggans in nearly all its 50 parks,” reporter Jen Gerson wrote. “Other cities, including Des Moines, Iowa; Montville, New Jersey; Lincoln, Nebraska; and Columbia City, Indiana, are following suit by restricting certain runs or posting signs warning people away. . . . In Canada, Hamilton has restricted sledding on pain of a hefty fine for almost 15 years.”

It’s true that you can’t toboggan in as many places as you once could. (At Murray Hill Park, near my childhood home in Montreal, the city keeps adding new rows of parallel fences to prevent anyone from even thinking about having fun on its south-facing slope. Pretty soon, I expect to see the hill dotted with concrete Drachenzähne.) And yet, Canadians are somehow finding places to sled. By my observation, there actually are more people on toboggans than ever. It’s just that a lot of them happen to be adults.

When I was a young kid on vacation in the Laurentians, my mother would zip my sister and me up in our ski jackets and toss us outside the very moment there was snow on the ground. We would go up and down the hill until one of us was frostbitten or injured. My mother’s level of participation consisted of making us hot chocolate when we returned home. I have no idea what she did while we were out risking our necks. I assume she was reading, since mom always managed to blast through great stacks of books and magazines when we headed up north. As for my dad, he often was in the garage, where he pursued a hobby restoring World War II–era US Army jeeps.

As any modern parent knows, this is not how tobogganing works in 2015. The idea of sending young kids out on their own is considered dangerous since, in their childish stupidity, they presumably will pick a too-steep hill and crash. Or they will arrive safely at the bottom of the hill and glide right into the arms of a waiting pedophile.

What happens instead is that the whole family goes out to the hill together as part of their weekend “quality time.” Maybe mom gets on the toboggan, to steer the thing, and keep the kids safe, and prove she is a Fun Mom. Maybe dad takes pictures on his smartphone to post to Facebook. The whole thing lasts about ten minutes, because that’s how long it takes one parent to get bored and the other to get cold. Also, the kids are whiney—because mom and dad, mom and mom, or dad and dad are both in attendance, so, hey, why not.

I wasn’t a particularly adventurous kid. But a lot of what I did around our cottage in Ivry, Quebec would be unthinkable today. It was an inexpensive house: instead of fronting a lake, we had a small, muddy pond about the size of a Little League baseball field. At one point, when I was six, the pond was dredged, and the larger boulders from the bottom were dropped in a big, semi-continuous heap along the pond’s periphery. All sorts of animals made their homes in the nooks and crannies of this rock jumble; I spent whole summer days trying to catch frogs, tadpoles, sunfish, perch, crayfish, and leeches.

The act of exploration required me to make big (by a child’s standards) jumps from one rock jumble to another—sometimes in parts of the pond that were completely obscured by trees. I could have slipped, hit my head, been knocked unconscious, and then fallen into the water and drowned. This would have been extremely unlikely—a one-in-a-million event, the statistical equivalent of the pedophile waiting at the bottom of the toboggan hill. Then again, today’s parents routinely obsess over one-in-a-million risks.

And I’m no different. If one of my own children wanted to go explore the pond rocks of my youth, I’d probably say no. Or I might say yes, but only on condition that I come along, being a Fun Dad, warning her every three seconds about which rocks looked safe and which didn’t. Eventually, after a few minutes of this sort of thing, we would celebrate our quality time together by taking a Facebook photo of her standing on a rock in her life jacket and helmet. And then we’d leave.

It’s common for culture critics to lament that our obsession with safety has made children risk-averse and less adventurous. And it’s true—they are. But what we don’t talk about nearly as often is how this affects parents. I just spent the last two weeks on winter vacation with my young children, who now are around the age I was in my rock-hopping and tobogganing prime. During this period, I dutifully accompanied them through the whole gamut of wholesome outdoor activities. In two weeks, I read exactly half a book, and restored zero army jeeps.

According to one study I’ve seen, twenty-first century parents spend something like three times as much time with their children as parents did in the 1960s—despite the fact that we also are working harder to make money. When I go home tonight, I will help my kids with their homework (despite the fact that my assistance won’t statistically help them do any better in school), then I will hover over them to ensure they eat the nutritious parts of their dinner, referee their arguments, read them books (look, Facebook, we’re enjoying Dr. Seuss!), and, finally, lie with them in bed until they fall asleep. At this point, the day will be over, and I will go to sleep, too. Thus do the child-free, late-evening hours—which my wife and I might otherwise use to drink cocktails, talk, and watch television together—evaporate into nothingness.

Almost all of this would have been considered bizarre behavior to my own mom and dad (who, I should add, were considered perfectly admirable, attentive, progressively minded caregivers by the standards of their day). When my bedtime came, I went upstairs and slept while they watched Mary Tyler Moore.

It is important not to romanticize the parenting styles of yesteryear. Sometimes, terrible things really did happen because parents were breezily negligent about what their young kids were doing. Children of my era (though not me) often rode around in cars without seat belts, and were exposed to second-hand smoke at the dinner table. The problem of child sex abuse wasn’t discussed much, so it was tragically common for kids to be left in the care of teachers, coaches, clerics, and relatives known to have creepy appetites. Those aspects of the good old days weren’t good at all, and aren’t missed.

But what was good, and which I will miss, is the understanding that a child and a parent needn’t be joined at the hip through every moment of their private, recreational existence. Would my life—or my dad’s—really have been improved if we’d been together snapping pictures of each other while I was climbing those rocks, or while he was restoring those jeeps?

I doubt it. You wouldn’t know it from Facebook. But sometimes, the best parents are the ones who stay at home, waving goodbye when you set out into the world all by yourself.