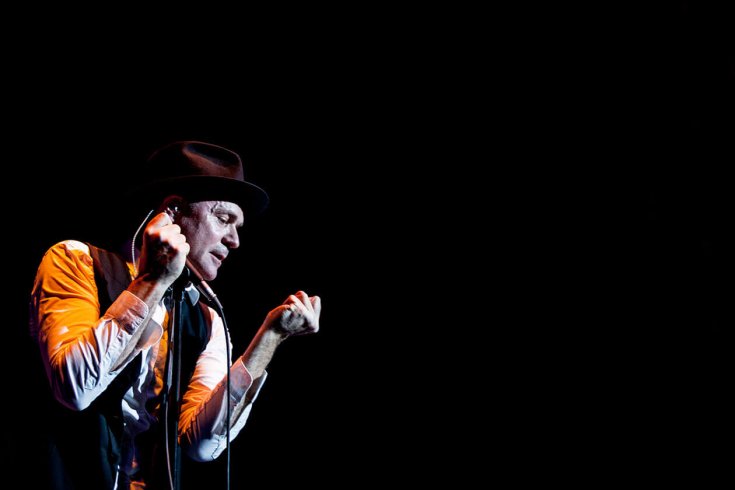 I’ve been listening to the Tragically Hip a lot this summer, ever since the band revealed in late May that lead singer Gord Downie has terminal brain cancer—and concurrently announced a national tour, likely the band’s last, which kicked off Friday in Victoria. I know I’m not alone. The news of Downie’s declining health has spurred a wave of nostalgia for the Hip’s unique blend of Canadiana and bluesy bar-rock these last few months.

But while so many people across the country are re-engaging with the Hip’s vast catalogue of hits—Courage, Ahead By a Century, New Orleans is Sinking, Bobcaygeon—I’ve only been able to listen to a single song, over and over again. It’s my last-gasp effort to connect with a band that defined Canadian music long before Arcade Fire or Drake.

Locked in the Trunk of a Car is the sixth track off of the Hip’s 1992 album, Fully Completely. It showcases, to my mind, Downie at his most lurid and graphic, narrating the story of a Sopranos-style murder and the hiding of the dead body. “Then I found a place it’s dark and it’s rotted . . . It’s a cool, sweet kinda place where the copters won’t spot it,” he sings. “And I destroyed the map, I even thought I forgot it . . . However, every day I’m dumping the body.”

Like so many of Downie’s lyrical compositions, Locked in the Trunk of a Car documents an actual moment in Canadian history. The Hip’s catalogue is littered with stories about our national past, from the mysterious death of hockey player Bill Barilko (Fifty Mission Cap), to the wrongful conviction of David Milgaard (Wheat Kings) to our victory on ice over the Soviets in 1972 (Fireworks). In Locked in the Trunk of a Car, Downie’s words recount the October Crisis of 1970 and the Front de libération du Québec’s murder of Quebec cabinet minister Pierre Laporte, whose body was discovered October 17, 1970 in the trunk of an abandoned car near the Saint-Hubert Airport outside Montreal. (Downie is notoriously guarded when it comes to revealing the meaning of his lyrics. But in this case, the interpretation I am providing reflects not only the content of the song, but the consensus among Hip fans.)

As Downie sings, the rest of the band musically mimics the emotions of the murderer-protagonist. The song opens with a simple, contemplative riff in B-minor played by lead guitarist Rob Baker. Drummer Johnny Fay lightly taps a cymbal in time while rhythm guitarist Paul Langlois offers backing barre chords. As the song picks up around the one-minute mark, the band launches into what is, effectively, a straightforward, overdriven blues progression. The intensity continues to rise throughout, and after a short Baker solo, Downie repeats his earlier phraseology, only this time singing an octave higher and with more urgency. The killer, or at least the person charged with “dumping the body,” has reached a new emotional level. The reality of his actions are catching up to him. He knows what he’s done.

The song’s other recurring lyric has Downie singing “It’d be better for us if you don’t understand. It’d be better for me if you don’t understand.” As with the “I found a place” section, Downie reaches for a higher note the second time around, indicating the protagonist’s heightened anxiety. He is alone now, which it seems is for the best. How could anyone rationalize such a violent act? In effect, he is offering a musical homage to the inner voice from Edgar Allen Poe’s The Tell-Tale Heart.

Abruptly, the band quiets down. Downey is momentarily silent. And then, suddenly, the song builds to its final crescendo. Baker returns to his opening riff, Langlois and bassist Gord Sinclar unite on a simple B chord, and Fay pounds the tom-toms while Downie repeats the phrase, “Let me out” seven times, each time with more urgency until he is screaming in desperation as the song ends.

Who is “me”? The obvious answer is the victim locked in the trunk—which would reveal a last-minute narrative shift from criminal to victim. (This is not uncharacteristic of Downey, who sometimes would shift perspective in his work. Locked in the Trunk of a Car actually begins with what appears to be an unrelated story about the body of a conquistador discovered in the bowels of a shark). The double meaning has “Let me out” being a plea from the criminal protagonist, who feels imprisoned by his actions.

These morbid lyrics have been with me all summer. The Hip’s last tour is a cause for one final aural hurrah—a celebration of our national rock band and its iconic frontman. But in another sense, this tour is something of a public, prolonged meditation on life’s finality.

This is no Last Waltz; but something of a wake. And knowing that makes it harder to enjoy the music itself. To borrow a phrase: It’d be better for me if I didn’t understand.

*An earlier version of this article incorrectly stated the year of the 1972 Summit Series.

Yoni Goldstein is editor of the Canadian Jewish News.