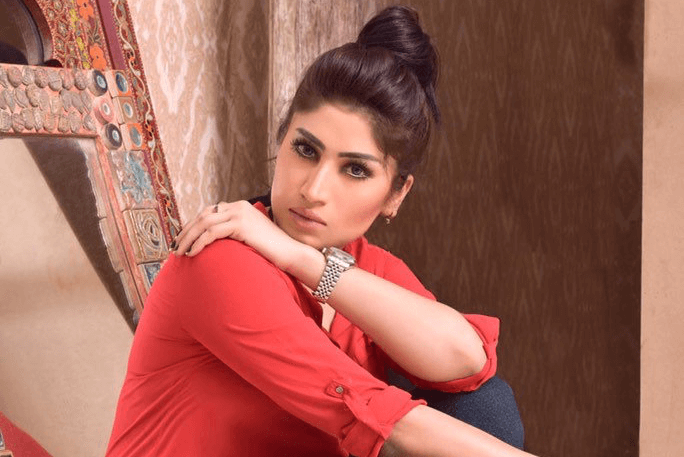 Life has taught me lessons in a early age…My Journey from a girl to a SELF DEPENDENT WOMEN was not easy.#Qandeel pic.twitter.com/Mwyn4UC32z

Last Friday, Qandeel Baloch was murdered by her brother in what the killer himself proudly admits was an honour killing. The twenty-six-year-old Pakistani victim, a self-described “One Woman Army,” was an active social-media personality who posed from her bedroom in cleavage-exposing dresses and robes. She promised to perform a striptease if Pakistan beat India in a cricket match. In what has now become her last video, she twerked to a song called Ban. Baloch’s real name was Fauzia Aseem. In death, she was dubbed “Pakistan’s Kim Kardashian” by major media outlets here in the West1, 2, 3, 4, 5. But that description is wildly off-base, underscoring how little we appreciate the barriers and dangers faced by women in this part of Asia.

One of twelve siblings, Baloch hailed from a poor village in a traditional, feudal region of Pakistan’s Punjab region. Like many women in Pakistan, she was forced into marriage as a teenager. She began her social-media career after leaving her husband, and used the financial proceeds to support her family—including, ironically, the brother who choked her to death.

We tend to perceive social-media personalities as distractions, baiting us with their self-indulgent vulgarities. But Baloch’s provocative, polarising online status in Pakistan—and the tragic way she died—highlight the very serious and complicated issue of women’s rights within Pakistan’s patriarchal society.

Last month, during the Muslim celebration of Ramadan, Baloch posted a video of herself from a hotel room. She posed and pouted as she sat on the arm of a sofa next to a mesmerized religious leader. In a selfie from that moment, Baloch suggestively looks at the camera as she models the cleric’s hat. He is star-struck, completely out of his element. Muslim clerics are not meant to be mocked in this manner. Certainly not in Pakistan. Certainly not by a woman.

We have the luxury, here in the West, of talking about feminism in all its various cultural iterations and subtle forms. We even devote space to arguing about whether Kardashian herself is undermining feminism, or reinventing it. But as Baloch shows, feminism in Pakistan is not a game of semantics or identity politics. It is a true life-or-death struggle—involving such basic rights as freedom of movement, education, the choice of whom to marry, and the very freedom to exist as an autonomous human being. Religion, politics and socio-cultural traditions all play overlapping roles in enforcing rigid gender roles.

There are too many cases of Pakistani women being abused every year—but only a small fraction of them ever become known in the West. One of them was Nobel laureate Malala Yousafzai, a mild-mannered teenager who was shot by the Taliban for bravely daring to demand education for girls. Baloch, on the other hand, defied a patriarchal society’s expectations on how a woman should present herself publicly. The two couldn’t have presented themselves more differently. But with their words and their actions, they were essentially fighting the same battle—to allow a woman to define herself as she pleases.

And there are some signs of success: While, in the past, many family members have often supported the honour-killing of their disobedient Pakistani daughters (at least publicly), this has not been the case with Baloch—whose parents want their son to be charged with murder, publicly stating that Baloch’s online presence did not bother them.

Another sign of progress is that the problem of honour killings in Pakistan is increasingly being tracked in a systematic way. Baloch is the latest death on a list of honour killings tracked by the Human Rights Commission of Pakistan (whose 2015 report on the subject counts over 1,000 victims). Other names include Farzana Iqbal, who was stoned to death by her family in front of a Pakistani High Court for eloping with the man she loved. Or eighteen-year-old Zeenat, whose mother choked and burned her last month for marrying a childhood friend she loved. Or the eighteen-year-old Komal Bibi who was shot by her father in March because she could not account for where she had been for a period of about five hours—her murder came a day after filmmaker Sharmeen Obaid-Chinoy won an Oscar for her documentary on honour killings.

Baloch’s death bring fresh urgency to the honour-killings legislation that the government of Pakistan promised to instate back in March, after Obaid-Chinoy won the Oscar and put the subject more visibly in the global spotlight. The daughter of Prime Minister Nawaz Sharif promised on Wednesday that the laws would be passed within weeks. If this comes to pass, Baloch’s tragic death will at least have some silver lining.

As of the middle of this week, almost 4,000 people had signed an online petition posted by a feminist collective in condemnation of Baloch’s death, calling her “a rebel, an artist, and a gutsy feminist provocateur.” It is an echo of the feelings of many Pakistanis on social media: “She was our Qandeel: a working-class woman, a Third World feminist, a disrupter and a firebrand who dared to do as she pleased, despite threats to her life.”

A post that was pinned on Qandeel’s Facebook page was an acknowledgement of an international audience that she thought understood her. “At least international media can see how I am trying to change the typical orthodox mindset of people who don’t want to come out of their shells of false beliefs and old practices,” she said. In the West, our social-media celebrities offer titillating distractions from the serious challenges facing our society. In Pakistan, they embody those challenges in flesh and blood.

Fatima Syed is a reporter with The Narwhal and the host of the podcast The Backbench. She writes about politics, social justice, and climate change.