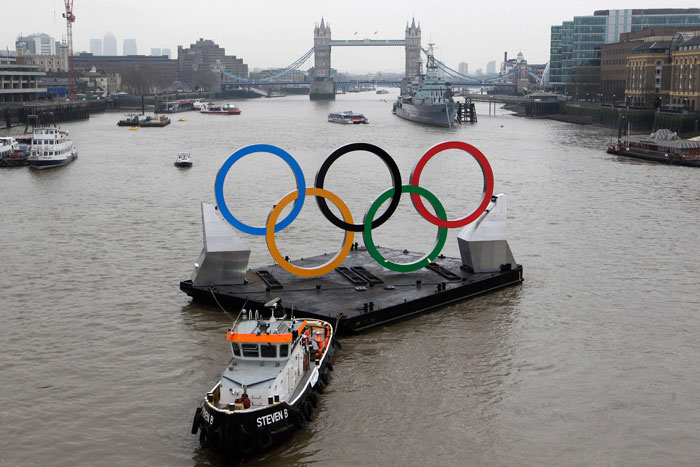 Sang Tan/The Associated PressPreparations for the London 2012 Olympic Games, on the Thames River.

My love affair with London ended thirty years ago, and not on the best of terms. Margaret Thatcher’s brutish policies and the riots and violence they spawned drove my wife and me from the country, looking for a safer tree in which to build our nest. Though I’ve often returned, it was only ever to visit, staying with my mother in the house where I grew up. In such overfamiliar surroundings, I barely noticed how London was changing as the years and the decades crept by. Now I must pay the price for such inattention. Later this summer, I’m hosting a group of Canadian friends who are visiting for the Olympics. They expect me to be an expert on the city, brimful of intimate insights and contemporary savoir faire… So I’ve come back to reconnoitre, walking down to the river tonight, hoping for the same inspiration I used to find here in my teens, parked on the Chelsea Embankment from midnight till two in the morning, watching the water while Court and Spark played endlessly on the eight-track. In those days, I never doubted I was a Londoner.

I was born and raised in Chelsea. Our house was part of a terraced street of workman’s cottages, our neighbours an inextricable jumble of working-class families and more or less eccentric artists. The last vestiges of an older London were still in evidence: a row of prefab bungalows left over from the war; thick yellow pea-souper fogs that smelled of the coal we burned in the fireplace; a greengrocer called Jimmy who went door to door with a horse and cart. But a three-minute walk away, the King’s Road was entirely up to date, unfurling its exotic petals in the long, hot summers of love in the mid-’60s. By the time I understood what those beautiful people were up to, they had moved on and Chelsea had started its stately progress into gentrification. Today the King’s Road has lost its raffish charm, now full of thoroughbred Sloanes and dawdling Europeans with cellphones, speaking in tongues. Only the geography remains: the tidied-up parks and gardens, churches and pubs, the houses where the friends and girlfriends of my youth once lived, the side streets that run down to the river. 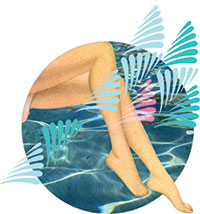 The lido shows off an unexpectedly Mediterranean side of London. These vast outdoor community swimming baths, often filled with fresh water, are fringed by sunbathing beaches and cafés. Most, like Hackney’s London Fields Lido, were built in the 1930s, inspired by Berlin’s Volksparks. They were later closed during England’s postwar austerity years; with so many historic towns to rebuild, art deco bathing pavilions seemed less worthy of funding. By the end of the twentieth century, only ten of London’s sixty-eight lidos remained, and intellectuals mourned their loss in florid prose: “Indoor swimming [is] cramped, sweaty and supervised,” wrote journalist Julie Burchill in the ­Guardian. “But under the sun of an English summer day, all six of them, the lido makes you feel born again.” Author Roger Deakin compared their closure to “Cromwell’s desecration of the churches.” The newfound nostalgia paid off. After eighteen years of citizen petitions—and bulldozer standoffs—London Fields reopened in 2006.

The Thames is the great city’s sleek brown heart and soul, its ancient raison d’être. It’s cleaner now than it was on the day I fell in, rowing for my school down at Putney. My oar blade caught the half-submerged body of a drowned white cat, and my scull flipped over, plunging me in. The water had a curiously rich, earthy flavour.

It looks black and swollen tonight as I cross Chelsea Bridge and head off past the power station, through a Dickensian maze of poorly lit alleys to the Battersea Barge. Thames barges are long, dirty vessels—surprisingly fast and menacing if you’re an oarsman; even their wash is dangerous. This one is more like a two-storey houseboat, permanently moored at Nine Elms, propped upright over the sloping mud when the tide is out. Some enterprising people have turned it into a quaint little theatre with a bar and a serviceable kitchen, ideal for jazz or, tonight, for comedy. My twenty-four-year-old daughter, Mae, has been living in London for the past three years, building her career as a comedian, and she opens the show, followed by five other acts who are clever, surreal, and almost as funny as she is.

Mae has her own London, a box of experiences she has collected, densely populated by friends. She lives in Hackney, ever so trendy now but a no-go area when I was a lad. She and her fiancée buy miso-marinated tuna steak buns at Broadway Market, and go swimming in the Hampstead Heath ponds, where the icy water beneath the overhanging trees is dotted with lily pads. They love the free museums, the double-decker buses that run on time, the pub quizzes, and the endlessly bizarre and humiliating game shows on television. She admires the healthy culture of civil protest, but not the class divisions that still run like venom through the veins of British life. Coming home from gigs late at night, she has learned to take precautions against the East End’s peculiarly vicious street thugs, and to step around the splashes of binge drinkers’ vomit outside her neighbourhood pub.

Mae is my guide to living in modern London, showing me how to use an Oyster card to pay for public transport, and explaining jokes I don’t understand. I have no points of reference at all within the gossipy who’s who of minor television personalities that constitutes most of England’s current popular culture. This is not a matter of regret, but it does leave me feeling even more like a time traveller, an invisible tourist from the past.

“What is the city but the people? ” asks Coriolanus, but Shakespeare wasn’t talking about London. The city is too old, too vast, and too layered to be anything but indifferent to the scurrying multitudes. Everyone who lives here, or simply stays for a while, is free to imagine they have a relationship with the place, and contribute or even help in some way to create it. I used to think that, too, but now I know better. London ignores all suitors, however sincere their affection. It exists independently of its citizens, breathing in and breathing out each time the Thames tide turns, perpetually evolving with a slow yet relentless dynamic. It has moved on in the past thirty years, and I have been left behind.

Just now, the city looks splendidly seductive, all gussied up for the Games, and for the Queen’s Diamond Jubilee pageant: a thousand boats moving down the river. Quite unexpectedly, I find that I want to be a part of it all. I miss the intimacy we once shared, the city and I, however illusory it may have been. My friends have offered me a ticket for the men’s rowing finals. I shall be cheering for Canada, not for my native land, and London won’t give a damn.

James Chatto has written about restaurants, food, and drink since moving to Toronto in 1987.