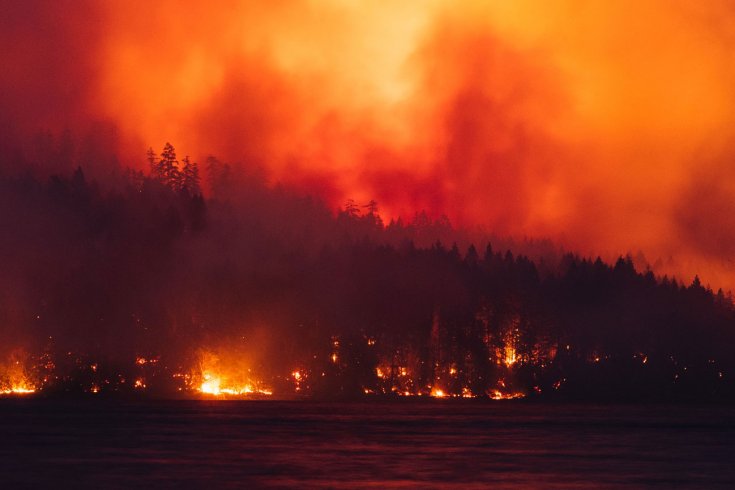 It was around 9 p.m., on July 5, when the radio clipped to Andrea Gillis’s chest pack crackled: “Get up here.” Her crew leader’s voice was direct but calm. High fire activity. Moving quickly. Down the mountainside, under a canopy of cedar, fir, and maple, all was dark and quiet. Gillis and the third member of her Initial Attack Crew were wading through salal bushes, extending a sprinkler line that shielded the western flank of eighteen lakefront cabins. Here, the ground was soft and sodden—an unusual feeling underfoot during the province’s driest and hottest start to the summer on record. They fitted a final waist-tall sprinkler, making sure the arc of its spray overlapped with the one fifteen metres away. Her crew was scheduled to be relieved at any minute, but the next crew had been delayed.

Earlier that day, just after noon, a helicopter crossed over Sproat Lake, twenty kilometres west of Port Alberni on Vancouver Island. The sky was an orange–brown haze. Plumes of smoke billowed from the top of Dog Mountain—a thickly forested peninsula with cabins along its shore. The fire had sparked just a day prior, according to BC’s Wildfire Service, not by a lightning strike but by human error: a campfire, or an errant cigarette butt. “There was a lot of smoke, but at that point the fire hadn’t moved down the mountain,” Gillis says.

In front of the advancing fire, the morning crew had begun setting alight ground “fuel”—branches, deadfall, small trees, anything combustible—to create a deliberately denuded swath of land known as a burn out. Compared to the more aggressive techniques of urban or structural firefighters, the women and men who combat wildfires on the ground in British Columbia mainly employ defensive tactics: containing the blaze, depriving it of fuel, letting it burn itself out. Before the Dog Mountain fire could be contained, it would burn through 450 hectares of forest, adding to the nearly 300,000 across the province so far this season—a number likely to exceed the annual totals over the past decade. 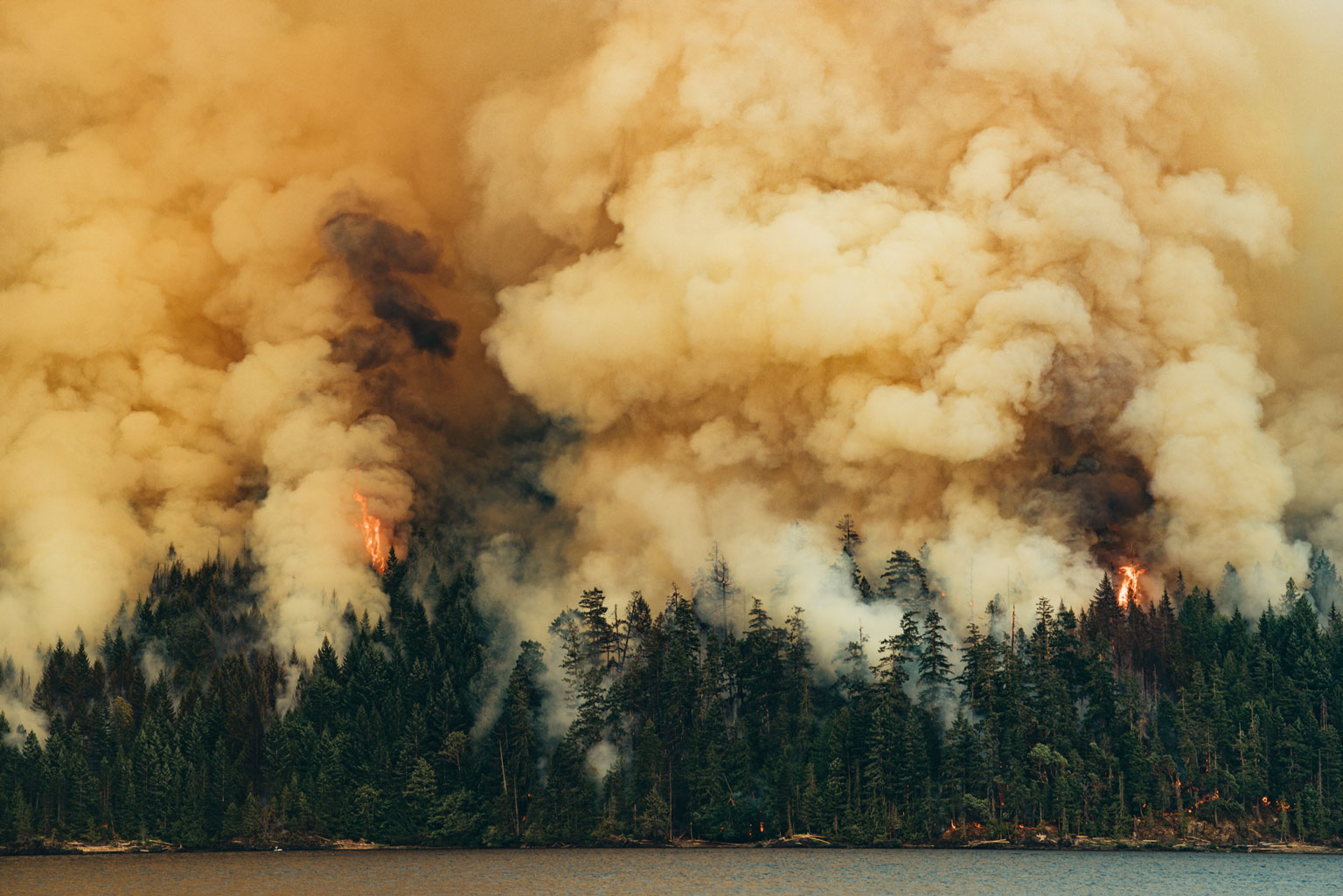 Through the hot afternoon, Gillis laid hose for a second boundary in the fireline: soaking the ground, underbrush, and moss to establish a five-metre deep “wet line” on the steep, rocky mountainside. Noticing a tall maple, its top aflame, her crew radioed in a helicopter to drop a bucket of water and extinguish the tree, fearing it might fall, cross into the “green,” and ignite behind the wet line. Communication was crucial, with her crew on the ground and helicopters overhead. “Sometimes they can’t see you,” she says. “Our geography is very different than what they’re seeing from the air.” Gillis watched for dislodged branches that could fall, known as widowmakers, or ash clouds produced from the thunderous blasts of water.

When the voice of her crew leader came over the radio, Gillis was nearing ten hours on site, her shirt drenched with sweat, her hands covered in soot and dirt. A panicked thought flashed through her mind: the flames had crossed the wet line. Returning to the lakeshore, she retrieved two eight-kilogram line packs from near the cabins filled with bottled water, food, first aid, and equipment. She switched on her headlamp and followed the dusty track up to the end of the hose line. There, she met her crew leader—and a blaze unlike any she had seen in her previous two seasons of fighting wildfire in BC’s forests. “It was high fire activity, candling, and moving pretty quickly down the side of the mountain,” she says. (Candling is when entire trees go up in flames, which is particularly dangerous when flames jump from tree to tree.) Gillis estimated the fire at Rank 3, midway on the Fire Intensity Rank System, categorized by vigorous surface activity, candling trees, and a rate of spread up to three metres per minute. But it hadn’t reached the wet line. In the dark she saw no smoke, only flames creeping down the mountain.

Her crew decided that two members would descend into a ravine to lay another section of hose. Gillis remained above, radio in hand, to monitor the head of the fire—if it moved, if it flared up, if the rate of spread increased. She relayed to her crew what she saw. “I was thinking, I’m the eyes,” she says. “I have to keep them safe.”

Gillis patrolled back and forth, making sure the fire wasn’t cutting off their escape route. Across the ravine, the glow from the fire held her transfixed. “It was eerie,” she says. “The glow definitely plays with your head, where it feels like the fire is coming at you faster, but it’s not.” Her breathing and heartbeat seemed to drown out the crackling of the fire. In a flash, a tree candled on the other side of the ravine, flames racing up the trunk and igniting the top in a rush of orange. “At that point, it wasn’t worth it to be down there and not know what is coming,” she says. “In our job, if it’s one No, it’s no-go. If one person doesn’t feel comfortable, we’re not staying.” Gillis radioed her crew. She kept checking her watch until her crewmates’ backlit silhouettes emerged through the dark. 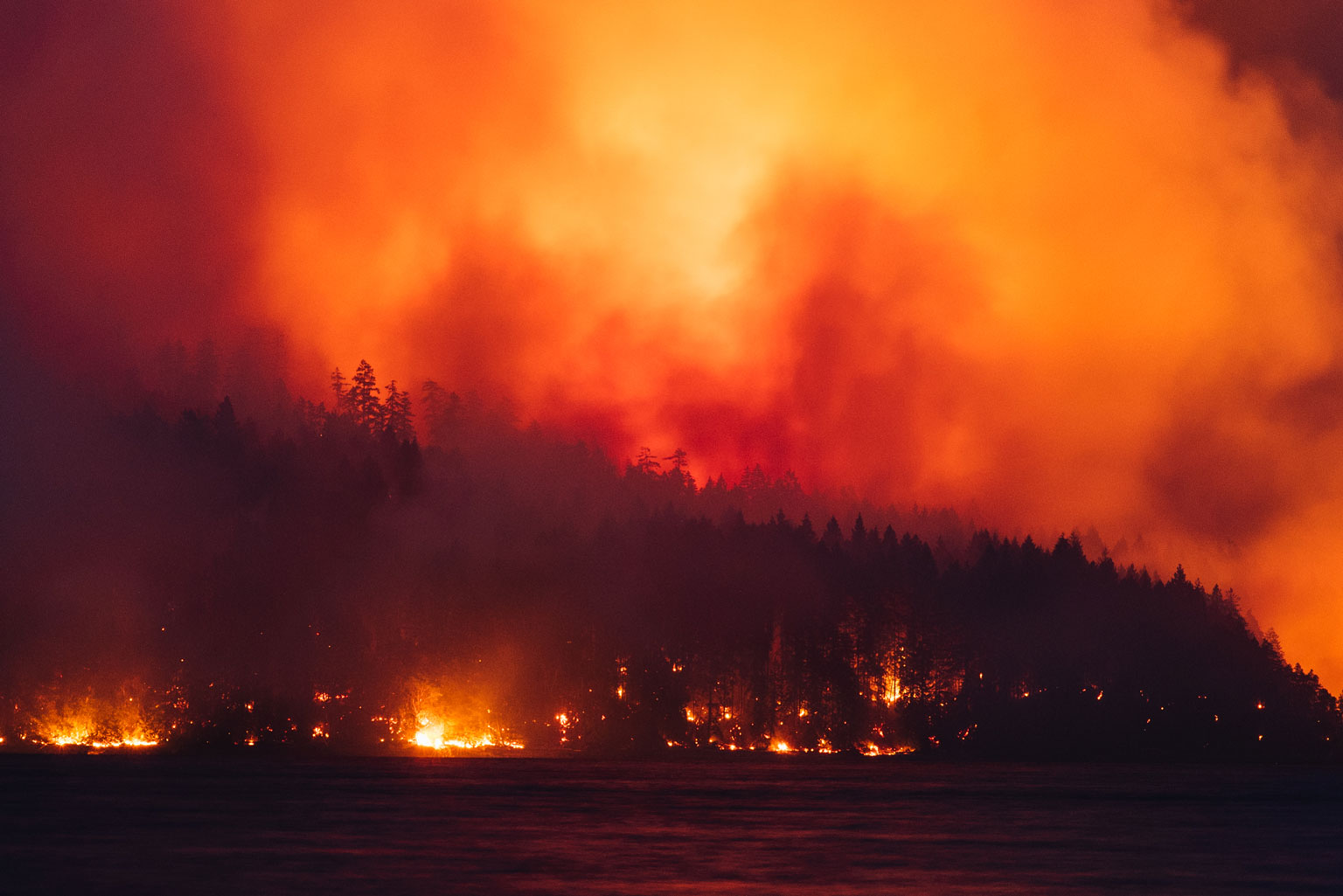 Down at the docks, Gillis met the relief crew, and helped unload more pumps, hose, and sprinklers. There, out of the forest, the scope of the fire came into focus. “We looked up at the top of the mountain and the entire sky was red,” she says. “Imagine just looking up at a tree line and everything you see ahead of you is bright red.” With the relief crew, Gillis took a boat to check on the cabins to the east, where there had been little fire activity all day. On an eastern dock, she set up a pump while the crew began fixing a sprinkler line in the forest. A small boat motored close; it was the owners of one of the cabins. An evacuation order had been issued, but Gillis said hi, and asked if they had any sprinklers. Her radio crackled again. It was sometime between 3 and 4 a.m., and her crew’s shift was over.

As Gillis’ crew boated away, the relief firefighters filled the radio channel with chatter: move more sprinklers east, connect the two hose lines up at near the ravine, reinforce the wet line. She crouched down in the hull of the aluminum boat as a chill washed over her, adrenaline flooding out and exhaustion rushing in. Her crew was quiet. She looked back at the fire on Dog Mountain, the blaze growing both smaller and bigger. “I had never seen anything like it,” she says.