Line in the Sand | The Walrus
Skip to content 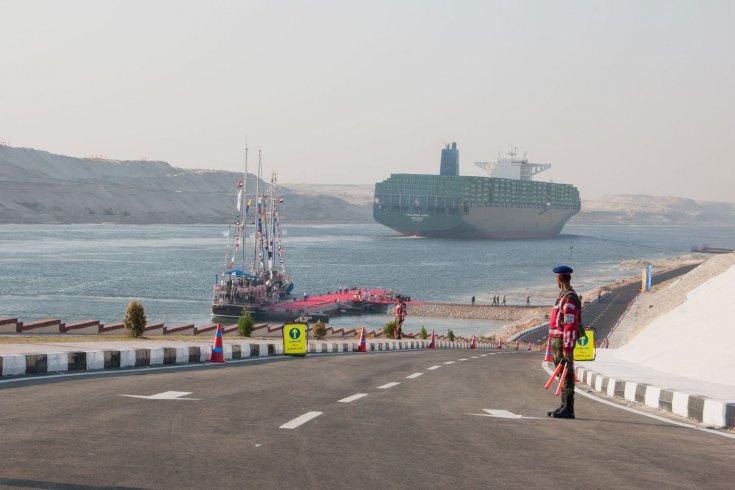 A Republican Guard watches the Thalassa Avra, pass through the new Suez Canal.

Last week, I found myself hemming and hawing over a century-old papyrus map of Egypt, in a basement store not far from the Nile River. When the shopkeeper learned I was in town to cover the opening of the new Suez Canal, he immediately slashed his asking price. “I’m doing this because you are a journalist,” he explained. “And because I want you to tell people good things about our country. Promise me.”

There is plenty of good to tell—even if the Canadian government discourages all non-essential travel to Egypt: The Giza Plateau is breathtaking. The whirling dervishes are agile. The halloumi is plentiful. The soldiers appear fit and well disciplined. Everyone is friendly. But there’s also plenty of bad: The air is heavy with pollution, and the streets are filthy. The traffic is anarchic. The Great Pyramid ticket booth doesn’t take credit cards. The security is overwhelming and inconvenient.

The shopkeeper wasn’t concerned with any of these things. Like every other Egyptian I met, he was fixated on the Suez Canal’s expansion and the speed at which it was accomplished. Like the others, he was consumed with pride, but also strangely desperate for outside affirmation.

Last Thursday, I stood among hundreds of journalists and 6,000 honoured guests, including François Hollande, Mahmoud Abbas, and Omar al-Bashir, as President Abdel Fattah el-Sisi and the Egyptian military presided over a lavish inauguration ceremony, coinciding with a hastily declared public holiday. It was just a year ago that Sisi announced the construction of a seventy-two-kilometre expansion to one of the world’s most famous shipping lanes. The project was supposed to take thirty-six months. The fact that it took just twelve has been celebrated as a marvel of Egyptian engineering. Eighty-three contractors, six dredging companies, and some 43,000 workers dug the new passage —twenty-four metres deep and 317 metres wide.

The Egyptian people themselves funded the project, buying $8.5 billion worth of bonds in just six days (all figures US). The project includes a new thirty-five-kilometre-long shipping lane that twins narrow sections of the older waterway, and permits vessels to pass in opposite directions simultaneously. Overall, the canal’s capacity is expected to nearly double, and average transit time will be reduced by eight hours. If the Suez Canal Authority can realize the government’s dreams, annual revenues from Egypt’s most important source of income will grow from $5.3 billion today to more than $13 billion in 2023. (By comparison, the Panama Canal generates a surprisingly meagre $2 billion.)

“The new Suez Canal proves to the world that Egypt can achieve all challenges,” an announcer told the crowd assembled in the blistering heat. One expects grandiose rhetoric at events of this nature, but this was on another level: “Egypt was the first nation-state in the world. The Egyptian man built civilization—built civilization alone. Today, history repeats itself. Another sun rises to spread its rays around the world. We declare our ability—our ability to challenge, to step forward.”

Like most of the reporters from around the world, I attended the event as a guest of the Suez Canal Authority. (The Egyptian government paid for my flight and my hotel.) And like most of them, I came away with mixed impressions.

The “first nation-state in the world” still has trouble putting on a big-ticket event. A two-hour bus ride from Cairo to the eastern bank of the Suez turned into a four-hour ordeal, complete with seven military checkpoints (but zero bathroom breaks). At least one bus (mine) was separated from the convoy and got lost, despite its military escort. One Russian journalist apparently had to use her seat as a toilet. Twenty-five reporters, personally invited by the Egyptian government, were turned back at the final checkpoint, despite having cleared the first six. Broadcasters from France, the United Kingdom, and numerous other countries were due on the air at noon; we didn’t arrive until 2:15 p.m., after the military flyovers had begun.

Once we actually made it inside the venue—purpose-built in the middle of the desert, with a brand new mosque on the northern edge—we were ushered into a media tent that offered no direct views of the ceremony. When Sisi took the stage hours later, the former coup leader, surrounded by five military battalions and the Middle East’s political elite, made a stab at populism: “Let me improvise. Let me talk to you as an Egyptian citizen—not from a written speech.” He went on to praise his country for its “gift to the world,” decried ISIS, and promised yet more “ambitious dreams to build the Egypt of the future.” Then horns blared as two massive container ships—one going north, one going south—passed behind the stage. Applause erupted, even among some of the less jaded press. “The new Suez Canal changes the world map forever,” an announcer said.

There’s no doubt that this is an important piece of geopolitical real estate. The original canal opened in 1869, after a decade of construction, and truly did redraw global trade routes. Eighty-seven years later, Israel invaded Egypt, and Canada came of diplomatic age in the denouement of the ensuing Suez Crisis. Exactly how the 2015 expansion will change the world, however, remains to be seen.

I’d like to report more detail about the canal, more colourful anecdotes of the ceremony itself. But we didn’t escape the media tent, with its spotty audio transmitters, until the container ships began to pass. We saw only what the official video feed broadcast. We couldn’t pose the questions that weren’t answered in the slick bilingual commemorative booklet: Can Nimitz-class carriers fit through the new canal? Does the 1888 Convention of Constantinople, guaranteeing all nations passage during war and peace, apply equally to the new sections? What happens to the publicly held bonds if traffic predictions fall flat? Needless to say, there was no press scrum.

On my way back to Canada, I thought about what the Cairo shopkeeper had said: “I want you to tell people good things about our country. Promise me.” Of course, as a journalist, I can’t make that sort of promise. But the memory of our conversation did prompt me to look beyond Sisi’s bombast and his government’s logistical amateurism, and appreciate the good news gouged into the surface of the Sinai Peninsula.

Sisi proclaimed that the expanded Suez Canal will transform Egypt into “a logistical hub that is balanced, economically integrated, and environmentally friendly.” Setting aside the jingoism and puffery, these are admirable ambitions. In a part of the world where much of the population has given itself over to a barbaric caliphate, Sisi’s modern vision is reassuring to behold.