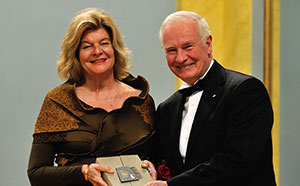 “It’s been a little hard to let it absorb and soak in. I’m so used to myself as somebody who will never really make it. I’ve spent my life working on the margins, and I’ve gotten used to that. So this is weird. I don’t know how to explain it.”

Linda Spalding is on the phone from Petaluma, California, a town sixty kilometres north of San Francisco. She says she loves her annual visit there during winters, and that she’d planned this particular trip before her big win of this year’s Governor General’s Literary Award for fiction. Petaluma is now providing a richly deserved break from a whirlwind of readings, interviews, and general attention for her novel, The Purchase.

“The margins is all I’ve known,” she continues. “I’m a bit old to change my way of thinking about myself. But I’m trying. I’m swearing that I’m going to become a diva any minute.”

From what I can tell during our conversation, the sixty-nine-year-old Spalding has a pretty remote chance of becoming a diva. I soon learn that while she’s grateful for the accolades, she has a healthy perspective on major literary awards and what they mean for Canada’s writers.

“Certainly in the short run, it’s going to change things a little bit. People are really responding, which is fantastic,” she says.

Spalding understands intimately the pressure Canadian writers put on themselves to win prizes, seeing it both in herself and her writer friends. (Not to mention her husband is Michael Ondaatje, who is no stranger to literary accolades.) She notes that the burden here far outweighs that of our southern counterparts, simply because of the vast difference in market scale. The all-caps LITERARY AWARD is a one-in-a-million chance for American writers, and while Canadians may have an easier time collecting individual honours, they’re much harder on themselves as a result. 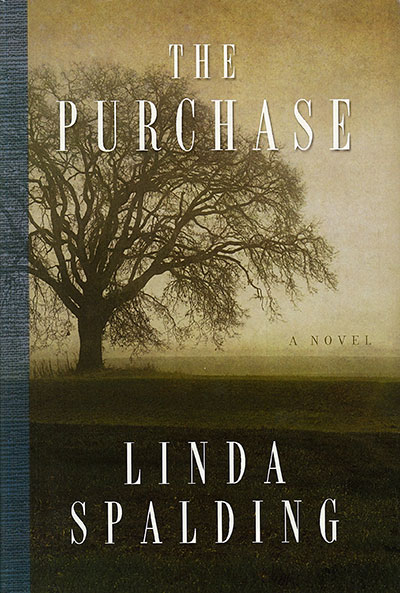 “I’ve always said, perhaps unwisely, that there’s a certain toxic effect to prizes. In Canada, they seem to be enormously important. They seem to be a big factor in terms of what people buy and what people think. We have such a small pool of writers, and if you write a book every four or five years, and you don’t get at least nominated for that book, then you feel desolate.”

Born in Tepoka, Kansas, Spalding transplanted to Canada in the early eighties. She came to the literary community when she was, as she puts it, “given” Toronto’s Brick Magazine, a publication that she has worked with ever since. “I feel very Canadian, but I think my brain is pretty American,” Spalding says. “When you move somewhere when you’re forty, you’ve [already] been formed.” Though she had written in the United States, Brick was her first experience with small and independent press, and provided her the support system to strive for publication.

The Purchase is Spalding’s fourth fictional effort since landing north of the border. (She has also published three earlier novels and two acclaimed works of non-fiction.) It is a visually rich yet sparsely told story of Daniel Dickinson, a man mourning the death of his wife. Daniel is rejected by his devout Quaker community after, in an act of misguided responsibility, his hasty marriage to his fifteen-year-old orphaned servant girl. With his new, naïve bride and four children in tow, he sets off on the harrowing journey to the southern edge of the Virginia frontier, where his faith and morality will be further tested. There, the firm abolitionist becomes the unexpected owner of a young slave named Onesimus, and the boy’s unforeseen place in Daniel’s life inevitably leads to a tragedy that haunts the family through generations.

This was a deeply personal project for Spalding, who initially set out to write about her paternal grandparents. While rummaging around in her family’s history, she was compelled to go much further back in time. “I fell into this story about Daniel, who is the beginning story of my father’s family,” she tells me. Ultimately, The Purchase became Spalding’s effort to come to some sort of resolution about the darker corners of her family’s past—before she embarked on the project, she knew that her ancestors in Virginia had owned slaves, a piece of information that both astounded and intrigued her.

The book also, by Spalding’s own admission, honours a brief period of her life when she explored Quakerism through an invitation from her brother and his wife. She speaks fondly of a time during her teenage years in Kansas, where she attended Quaker meetings and went on excursions, telling me she “kind of converted for a few years” before attending university. “I was looking, as you do at that age, for some kind of big hit to my heart and soul,” she says. “And that did it for quite some time. It was not just religion, it was activism. And I’d never seen that before.

“If you were a Quaker in 1798, and you got disowned, and you went to the frontier, what happened to your brain and heart that caused you to become a slave owner? It was so incomprehensible.”

In reading The Purchase, it’s obvious that Spalding has done extensive amounts of research to propel her reader into an authentic experience of the distant past. The author, though, is almost dismissive about the amount of work involved. “I don’t think any of us can truly write about the past. I mean, I’m not a historian. What we try to do is imagine it. What I was trying to do was imagine the mindset of a nineteenth-century person, to get myself completely embedded in his reality.”

Though Spalding claims she’s not very academic, The Purchase is a meticulously documented portrait of the moral ambiguity of a troubled man living in a vicious time. The book’s fundamental strength lies in its ability to investigate what circumstance does to firmly rooted, institutionalized belief systems, and how our flawed choices affect not only ourselves, but those whose lives we touch. “Someone asked me what all my books have in common. I’d never thought of that before. But when I thought about it, they’re all about good people doing bad things,” Spalding says. “It’s the going-astray moment in a life: we all have that little line we’ve crossed one or ten times, and we feel disappointed in ourselves. Sometimes it’s a huge disappointment. Sometimes it’s soul rending. I think it must have been for Daniel.”

As we approach the end of our conversation, I realize how tricky it is to interview Spalding without at least once raising her marriage to Ondaatje. I joke with her about a journalist who announced her as “a kind of Hillary to (his) Bill”—a comparison she hadn’t heard, but laughs at good-naturedly. She then speaks sweetly of her partnership with one of the country’s most high-profile authors.

“Who is most excited about [my receiving this award] is Michael. I think he’s relieved. He’s really tickled about it. It must be nice for him to not have to feel that slight onus of being the only one in the house who gets the prizes,” she laughs.

“I came to Canada at the age of thirty-nine never having been published in my life. Michael had already won two or three GGs by then. We’re not in competition. I had to figure that out myself,” she says. “When you’re super brilliant, which he is—I mean, I’m not saying that because I’m in love with him—it’s really different. It isn’t comparable.”

In the end, Spalding doesn’t imagine that winning the GG will change her writing, nor should it, given how stunning and successful The Purchase is as a work of fiction.

“I worked so hard on this book,” she says, humbly. “I’m really glad people appreciate it and like it.”