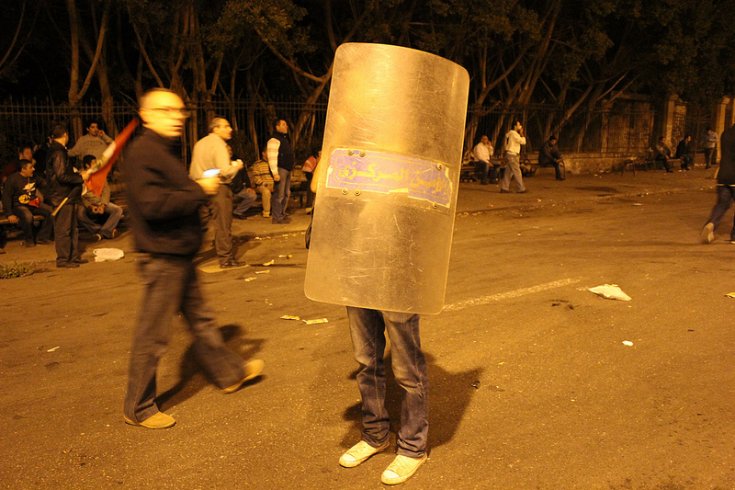 Gigi Ibrahim A scene from Cairo, recently uploaded to Flickr.

This week: Egypt’s turbulent passage to democracy encountered further obstacles. Protests continued in Cairo, after President Mohamed Morsi refused to cede the supreme powers he granted himself on November 22. Seven people died and over 600 were wounded in new violence between pro- and anti-Morsi factions. Secular opposition groups believe that Morsi’s assembly will push through a constitutional referendum that gives Islamist groups extra power. Protesters have refused the president’s offer to dialogue, demanding that he delay the referendum and immediately restore a judicial check to his power.

Last Saturday, in a surprise twist, Prime Minister Stephen Harper phoned his Israeli counterpart, Benjamin Netanyahu, to insist that Canada does not support Israel’s controversial plan to build 3,000 new housing units in East Jerusalem and the West Bank. The effort was to no avail. On Tuesday, Netanyahu’s office announced in a statement that “Israel will continue to stand by its essential interests even in the face of international pressure, and there will be no change in the decision that was taken.”

In a Q&A published by Bloomberg Businessweek, Apple’s chief executive, Timothy D. Cook, announced that the company—well known for having outsourced jobs overseas—will reboot domestic production of its computers next year, investing more than $100 million (US) to bring the Mac back to America. Asked about the obligations of a US company to be patriotic in the era of globalization, Cook added “I don’t think we have a responsibility to create a certain kind of job, but I think we do have a responsibility to create jobs.”

During last month’s US presidential election, Maine, Maryland, and Washington all passed laws approving gay marriage by popular vote. This week, Washington became the first of the three states to put its new rules into effect. Hundreds of same-sex couples began collecting their marriage licenses on Thursday.

Meanwhile, it seems every dog could have his Hyundai: a New Zealand charity is teaching rescued pooches how to drive.

Relatively good news for Canada: the unemployment rate is down 0.2 percent since last month, as 59,000 new jobs (mainly in the food service, retail, and agriculture sectors) were offered in Ontario, Quebec, Alberta, Manitoba, and Prince Edward Island. This puts the unemployment rate at 7.4 percent. The US is showing similar job growth, with unemployment down to a four-year low of 7.7 percent. Compare that to Greece, where the rate has reached 26 percent—or just slightly worse than Spain.

Our quote of the week goes to interim Liberal Leader Bob Rae, who called for the resignation of Minister of Defence Peter MacKay over the Harper government’s plan to replace Canada’s aging fighter jets: “He’s basically been a sales spokesperson for Lockheed Martin, the manufacturers of the F-35, since he took office. He’s denigrated and attacked every person in opposition, in the Liberal Party or elsewhere, who has ever raised concerns or questions about this.” (KPMG, the accounting firm hired to audit the F-35’s costs, recently reported that the actual pricetag could be more than $40 billion—as compared to the Conservatives’ claimed $9 billion.)

Yesterday was the anniversary of the 1989 Montreal Massacre, when fourteen women were gunned down by a misogynistic spree killer. Quebec marked the occasion by confirming its plans for a firearm registry. The announcement follows months of squabbling with the federal government, which voted in February to shut down its own long-gun registry, and is awaiting appeal of a Quebec Superior Court order to hand over the province’s share of the registry’s data.

Vancouver came in fifth in the 2012 Mercer Quality of Living survey, surpassing Ottawa and Toronto (which finished in fifteenth and sixteenth places, respectively).  “One of the things that Vancouver has going for it that the other cities do not is climate,” Mercer Canada’s Eleana Rodriguez told the Globe and Mail. The firm also surveyed access to health and medicine, schools, public transportation, recreation, housing, and consumer goods. Vienna, Austria, claimed the survey’s top spot.