Life and Death on Two Wheels | The Walrus
Skip to content 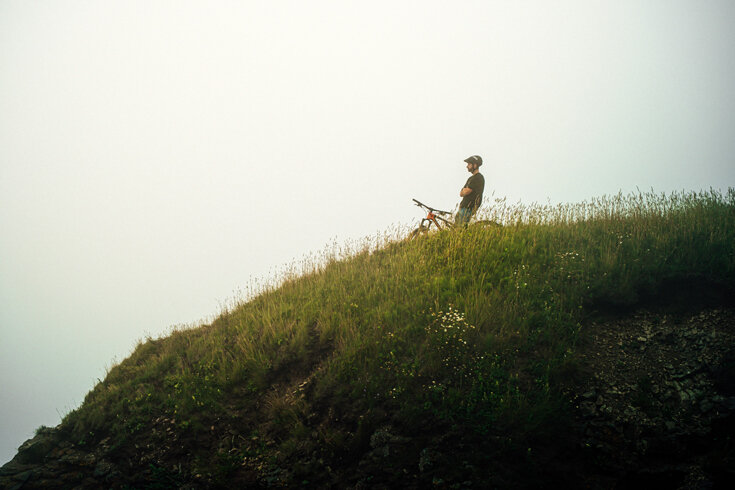 “On a bike, being just slightly above pedestrian and car eye level, one gets a perfect view of the goings-on in one’s own town.”

Ever since my father taught me to ride, in the dirt parking lot of a local community hall in rural Nova Scotia, I’ve been an avid cyclist. Some of my fondest teenage memories are of going on cycling trips across Atlantic Canada with him and my two younger brothers, carrying our tents and gear in waterproof panniers sewn by my mother. In grade eight, much to the chagrin of my teachers, my father and I spent three months cycling in southeast Mexico. “You’ll learn more from this trip than you will in any classroom,” he told me before we left, and he was absolutely right.

When I moved to Toronto for university, in 2008, biking was my primary mode of transportation for getting to class and various restaurant jobs. During music festivals, I’d pedal from venue to venue, often still covered in sweat from the previous show. In the summer, I’d load my bike onto the island ferry or meet up with friends in a park for drinks. Over time, cycling here teaches you to develop almost a sixth sense for anticipating danger. You learn to look out for drivers behaving erratically, avoid crossing streetcar tracks at the wrong angle, and plan your routes from point A to point B in order to avoid gridlock. I’ve luckily never been involved in any serious biking accidents in my twelve years living here, but Toronto’s reputation as a city hostile to cycling is well deserved.

However, when Toronto first declared a state of emergency over the COVID-19 pandemic, last March, it felt like the city was transformed into a biking utopia almost overnight. With vehicle traffic and transit ridership plummeting, even the busiest streets were far less hectic, and a record number of cyclists took advantage. Forty kilometres of new bike lanes were soon greenlit by city council, and by the summer, major roads were closed to motorists on Saturdays and Sundays. Bike shops could barely keep up with the demand, and cycling advocates used these positive trends to continue to push for expanded networks. The first half of 2020 was the safest for Toronto cyclists and pedestrians in over a decade—a silver lining in a year when silver linings were in short supply.

In June, when the monotony of working at home and the constant deluge of coronavirus-related press conferences, advisories, and news stories felt overwhelming, I’d find solace in getting on my used blue-and-orange Peugeot ten-speed and escaping into nature in High Park or along the Humber River. For a half hour or more, I was able to clear my head while taking in neighbourhood sights that otherwise would have gone unnoticed.

I wasn’t alone either—from the spandex-clad weekend warriors doing laps around High Park to the Baby Point families crowding the riverside trails, it seemed like everybody was enjoying a renewed appreciation of the city’s public outdoor spaces. Compared to trips to claustrophobic grocery stores and pharmacies, these excursions revealed a friendlier, gentler side of Toronto and its inhabitants. The first time I ventured to Lake Shore Boulevard on a Saturday, I couldn’t believe how many people were treating the thoroughfare like their own personal velodrome, a blur of whizzing bodies and nonmotorized vehicles. Even for a seasoned cyclist, it was a bit overwhelming trying to navigate, but I left thinking, “Why can’t it always be like this?”

As the pandemic wore on and Toronto’s and Ontario’s case numbers continued to rise, I found myself cycling in new corners of the city and seeing familiar neighbourhoods in a different light. I’d pick up wine from restaurants turned bottle shops and drop off film to be developed at an east-end camera store, often cutting through a financial district so unnaturally quiet that I half expected to see tumbleweeds straight out of a Western showdown. I played tennis with a friend at a community court on weekday mornings, biking down tranquil residential streets in the Junction to the more industrial Dupont Street, passing deserted storefronts, auto body shops, billboards repurposed with Black Lives Matter messages, and the slowly decaying ruins of Galleria Mall. When we couldn’t convene with others indoors, we trekked to locations like the wildlife-rich Leslie Street Spit and the now-empty Ontario Place grounds, riding together in small groups.

In the summer, bicycles decorated with homemade signs were a constant presence at peaceful antiracism rallies, from a Not Another Black Life–organized sit-in outside Toronto police headquarters to a High Park vigil for Regis Korchinski-Paquet. Volunteer cycling groups like Toronto’s Bike Brigade started delivering food, medicine, and other supplies to people in need. I saw friends and acquaintances on social media across North America and around the world attending similar protests, often accompanied by spoken-word poetry, music, and dancing. “Bicycles have played a starring role in the nationwide uprising that has followed George Floyd’s death at the hands of Minneapolis police officers two weeks ago,” wrote Jody Rosen in a June 2020 New Yorker story. “The bicycle is, supremely, a city vehicle; teens and young adults, who make up a sizable percentage of the protesters, are among the most enthusiastic urban cyclists.”

Along with these hopeful stories of bike-powered resistance and community aid, there were many heartbreaking reminders of how deadly cities can be to cyclists. In December, a twenty-three-year-old cyclist named Alexandra Amaro died after being struck by two vehicles on Dufferin Street near Dufferin Mall, a corridor I’ve biked countless times. I didn’t know her personally, but we had mutual friends who shared smiling photos of her on Instagram. She was the fourth Toronto cyclist killed last year, compared to just one in 2019, with the majority of these fatalities happening in the fall. (All told, there were fifteen cyclist deaths in the GTA in 2020.) After a relatively safe spring and summer for cyclists, as businesses reopened, traffic volumes rose again, and some of the aforementioned bike lanes were removed, it felt like this optimistic future wasn’t built to last.

Two months before Amaro’s death, three provinces and thousands of kilometres away, my father was killed by a truck driver while biking less than twenty minutes from the house where I grew up. Besides teaching me how to ride, he showed me first-hand how the bicycle could be not only a vehicle for exploring the world but a vehicle to help spread awareness about social justice. He raised thousands of dollars for Amnesty International on trips across South America and Canada with my youngest brother, and he organized bike rides to raise funds for local programs as a Red Cross volunteer.

In the initial week following the call from my mother, I couldn’t bring myself to touch my bike. I flew back to Nova Scotia with my girlfriend once we received our negative COVID-19 test results. After our mandatory two-week quarantine, we rented a car, traversing the same potholed dirt roads and narrow highways I had biked as a kid to school, friends’ houses, sports practices, and 4-H meetings. We also visited the new park my father was heavily involved with helping get built—115 acres of accessible hiking, biking, and running trails for people of all ages to enjoy.

As we approach the one-year anniversary of the first Toronto lockdown, not a single day goes by without me thinking about my dad and the countless other cyclists whose tragic deaths and serious injuries were completely preventable. I think about the thirty-seven-year-old man who fell riding on Dundas Street West and was dragged several blocks by a car. I think about John Offutt, a fifty-seven-year-old retired public school teacher who was struck by a cement truck on Royal York Road in Mimico. Most of all, I think about who has freedom of movement in cities and how we can create safer and more diverse cycling infrastructure.

My father believed that biking is a way to further know our neighbours, near and far, and strengthen our communities. In this strange and sorrow-filled past year, when many of the elected representatives in charge didn’t have the answers, we had to look out for one another in ways we never imagined. I’m not a city planner or a politician or a psychic, so I don’t know what the postpandemic future of Toronto cycling will look like, but I hope it’s a compassionate and inclusive one. When the first warm spring day finally arrives and I get my bike out of my backyard shed, that’s the future I’ll be pedalling toward.

This story was reprinted with permission from The Local.

Max Mertens is a Nova Scotia–born, Toronto-based freelance journalist. His work has appeared in Rolling Stone, GQ, Pitchfork, The Creative Independent, and more.