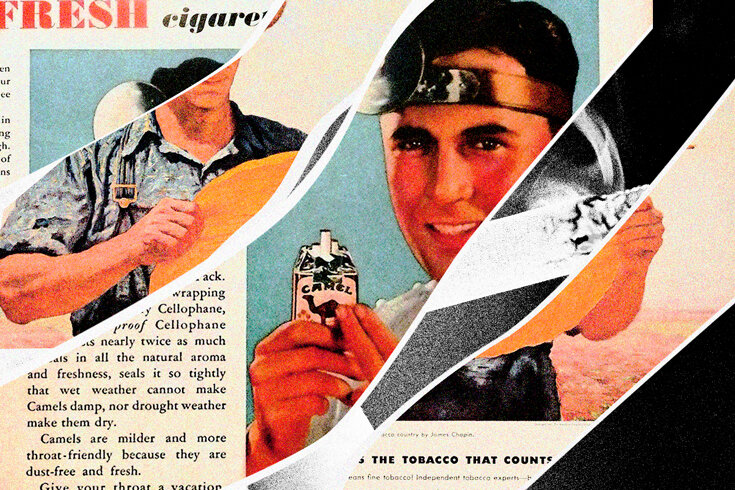 In the mid-1970s, I would hop on my bike and ride to a nearby store to buy my mom’s cigarettes. I was around ten then. My mom knew the store owner and had made this standing arrangement for when she couldn’t make it over. I also ran errands for things like bread and milk, but I barely remember those trips. Cigarettes were different. I still remember my mom’s brand—large king-sized du Maurier—and the deep-red look of those packs. I recall, too, the sense of responsibility I felt ferrying those cigarettes home, likely because most of the adults in my extended working-class family smoked, including both parents and a dozen or so aunts and uncles.

On family occasions, those red du Mauriers shared table space with green (Export “A”) and blue (Player’s) packs, the tricolour backdrop of holiday celebrations and summer vacations. In our family, cigarette cartons served as Christmas gifts, packs lay beside cribbage boards during play, uncles blew smoke rings to the delight of nieces and nephews, and moms puffed away while watching Happy Days with their kids. In shop class, I made a metal ashtray for Mother’s Day. My preteen self regarded a government budget as the day you stocked up on cigarettes to beat the next-day tax hike. My high school, in London, Ontario, had a designated “smoking pit” where the cool teens hung out. In grade eleven, our French class visited a high school in Acton Vale, Quebec, where students and teachers smoked together during breaks, even sharing cigarettes. Around that time, some friends and I attended a midnight showing of The Last Waltz at a repertory cinema. By the end of the film, the air was hazy with cigarette and pot smoke even though the theatre banned smoking.

These were some of the best years for the Canadian cigarette industry, and it’s surprising to realize that they came after medical science linked cigarettes to lung cancer and other serious diseases, in the early 1950s. Cigarette-selling had already branched out from tobacconist shops to grocers, supermarkets, restaurants, vending machines, and variety stores. In 1950, daily adult per capita consumption stood at 4.9 cigarettes. Thirty years later, it peaked at 9.6 cigarettes. This means that, on average, Canadians smoked nearly twice as many cigarettes in the mid-1970s as they did in 1950—a practice that spanned social class. Male smokers outnumbered women, but women closed this gender gap by the late 1970s. Indeed, in terms of social participation, geographic reach, and shared cultural norms, Canada was a cigarette nation. The cigarette industry remapped Ontario’s agricultural landscape; furnished the advertising that kept newspapers, magazines, and broadcasters profitable; and sent billions of tax dollars to government coffers.

Its social and cultural impact was even greater. “Can I get a light?” became the conversation starter for countless friendships and marriages. Smoking’s mannerisms infused the communication of sexual desire, on the screen and in the flesh. Being “social” often meant being a smoker, whether bantering with friends, entertaining at home, or sweet-talking a date. Cigarettes were a condition of everyday life.

That success was based on one of the most effective PR campaigns in history. A two-year Quebec class-action court case, which ended in 2015, made public a massive haul of company documents, federal government records, news stories, and cigarette ads. These files chronicled, in detail, how Canadian and foreign tobacco executives worked to market a product cited widely for producing lung cancer and other diseases.

Cigarette executives responded to medical warnings with a coordinated strategy of denial. They dismissing epidemiological studies as merely “statistical” and not properly clinical or experimental. Instead, they claimed that air pollution, viruses, and occupational hazards accounted for growing rates of lung cancer. Industry executives lambasted smoking-related reports by the US Office of the Surgeon General and other reputable organizations as biased, speculative, and faulty. They dismissed antismoking health authorities as publicity-seeking zealots. They funded outside researchers to secure findings challenging the relationship between smoking and disease. They sponsored tangential research so that the industry could publicize its own support of scientific inquiry aimed at solving the “controversy” of smoking and health. They went even further, recasting lung cancer as a marketing opportunity. They created new cigarette types to cater to health-anxious smokers. In 1954, Imperial Tobacco launched filter brands like Matinée, reflecting research finding that smokers viewed filter cigarettes as inherently healthier than plain-end brands.

And it worked. Well into the 1960s, surveys showed that Canadians remained uncertain about the cancer risks of smoking even though the issue was largely settled within the scientific community. Health-reassurance marketing also served to thwart or delay attempts to quit, keeping smokers within the ranks of Cigarette Nation. Indeed, during the post–“cancer scare” years, cigarette sales in Canada soared, from 17.1 billion in 1950 to 53.2 billion in 1972.

But the tobacco industry could hold back mounting concerns about the carcinogenicity of cigarettes for only so long. And, since the 1980s, governments have progressively restricted or banned indoor smoking, tobacco advertising, and the retail display of cigarettes. Universities have enacted campus-wide bans on tobacco sales and smoking even while outdoors. Many nonsmokers today lead lives that seldom cross paths with smokers or cigarettes—an unimaginable state of affairs during the 1950s.

The industry’s coordinated program of public deception, which would span four decades, evokes state propaganda, or even Orwell’s Ministry of Truth, as much as it does corporate advertising promoting the social benefits of low corporate taxes. This is because the tobacco industry did not aim to change public opinion on an issue for which legitimate debate was possible; rather, it worked to eradicate the very basis for knowing what constituted empirical fact and expert knowledge. The incessant attacks on mainstream smoking science, coupled with industry funding of decoy research, served to diminish people’s capacity to evaluate risk, weigh evidence, and make informed decisions. Smoking remained safe, industry talking points bellowed, because the scientist jurors were still deliberating—as they would be until the 1990s. Buttressing this denialist doctrine was a form of industry Newspeak that marshalled terms like “medical controversy,” “benefits of smoking,” and “freedom of choice” to drown out discourse on lung cancer and heart disease. All of this, historian Robert Proctor argues, amounted to an elaborate exercise in what he coined “agnotology,” or ignorance creation, characterized by the industry trifecta of “feigning its own ignorance of hazards, while simultaneously affirming the absence of definite proof in the scientific community, while also doing all it could to manufacture ignorance on the part of the smoking public.”

This story, sadly, does not end with tobacco. As Naomi Oreskes and Erik M. Conway show in their book Merchants of Doubt, the “Tobacco Strategy” of doubt-mongering and science repudiation became the template for later industry attacks on the science of climate change. During the 1980s and 1990s, scientist-for-hire allies of the US tobacco industry, like Frederick Seitz and S. Fred Singer, pivoted to “fight the facts and merchandise doubt” about the science of global warming. We can see the results of their work in Donald Trump’s campaign slogans, like “Trump Digs Coal,” or in the US’s withdrawal from the Paris Agreement, both of which underscore the endurance and political appeal of climate-science denial. Indeed, a core feature of Trumpism involves the routine rejection of expert knowledge—social, legal, economic, and scientific. Filling this gap is the strongman spectacle of rote lying as statecraft, self-dealing, and the “fake news” labelling of unfavourable press coverage, no matter how credible the source.

It all began with the big lie of big tobacco, one that would factor greatly in the massive death toll of cigarette smoking—an estimated 100 million people globally during the twentieth century. And one of its victims was my mother. More than that of anyone else in my family, her life was tied to cigarettes and smoking. She started smoking relatively late, in her early twenties. A stay-at-home working-class mom of two toddlers in the late 1960s, she socialized with other moms in the townhouse complex where we lived. After she divorced, in the early 1970s, cigarettes became part of her newfound working life. She smoked while typing or filing and, later on, in the company’s smoking room or its outside “butt hut,” where she and fellow smokers congregated.

As her health concerns mounted in the 1980s, she turned to the many “mild” and “light” brands offering health reassurance. She cycled through these “health” brands such that, each time I visited home for the holidays, there seemed to be a different one on the coffee table. Her quit attempts began soon afterward, with some lasting days and others a few months. Years later, I found her membership card for a smoking-cessation group she had joined, whose oath read: “Because I believe tobacco is detrimental to my health, and illness due to smoking would both jeopardize the security of those I love and hinder further service to my community, I hereby choose to cease smoking from this day forward.” She signed this pledge on February 25, 1983, but not until the late 1990s, in her early fifties, did she manage to quit smoking for good, closing a fraught thirty-year chapter of her life. In her later years, she regarded quitting cigarettes as one of the hardest and proudest achievements of her life.

When, in her early seventies, she received a cancer diagnosis, there was some initial relief that it did not appear to be smoking related. It was breast cancer, not lung cancer, and luckily it was caught early. But, near the end of her chemotherapy sessions, her breathing worsened. On the day of her final chemo appointment, in April 2017, she was instead admitted to the hospital to undergo tests, which revealed damage to her lung tissue. Her condition deteriorated, and she was later moved to the intensive care unit. Her final weeks were painful and agonizing, a succession of breathing masks, steroid doses, oxygen supplements, and intubation.

The hospital staff, who worked hard to save her life, concluded that this was a rare case of chemotherapy-induced interstitial lung disease, producing widespread scarring of her lung tissue. While unexpected and atypical in one sense, her final weeks would have been all too familiar to many Canadians. For hers, in many ways, was a smoker’s death.

Daniel J. Robinson is a historian and associate professor in the Faculty of Information and Media Studies at Western University. He lives in London, Ontario.