Law of the Jungle | The Walrus
Skip to content 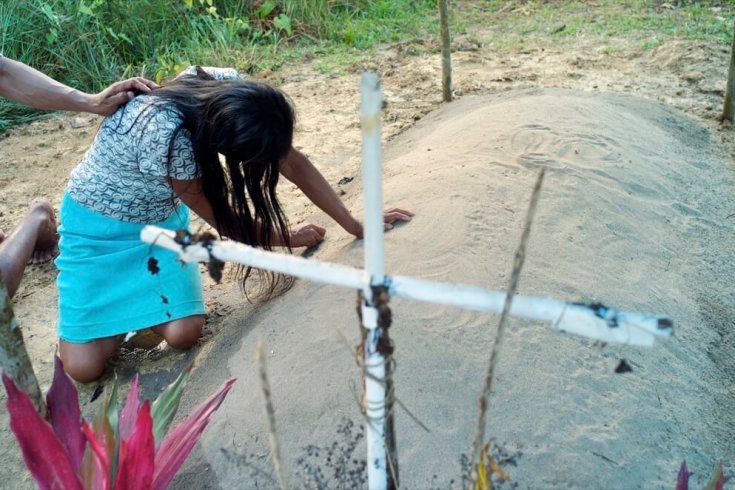 It was a scene that would have made sixteenth-century Spanish conquistador Francisco Pizarro proud: a few dozen police officers armed with automatic rifles facing off against 3,000 spear-bearing Awajun and Wampi natives in possession of the Curva del Diablo, gateway to the Peruvian Amazon. What the officers didn’t realize was that not all the natives who’d emerged from the jungle weeks earlier to block this critical stretch of highway were gathered there. As dawn broke on June 5, 2009, a unit patrolling the dry hills above the Curva stumbled on a group of several hundred more protesters nervously milling in the brush, and within minutes dozens had been shot and at least nine officers bludgeoned to death. The surviving police fled, spraying bullets behind them as they ran, while a police detachment manning the road dove into the ditch and opened fire on the masses. “Tear gas we were ready for,” says Joel Shimpukat, an Awajun teacher who travelled five hours by canoe and car from his village deep in the Amazon to help lead the blockade. “But when bullets started flying past my head, I realized the government had declared war on us.”

It’s a war that has been brewing since the Occidental Petroleum Corporation, an American company, drilled Peru’s first productive oil well, near the northern border with Ecuador, in 1972. Over the next three decades, Block 1AB produced on average 50,000 barrels of oil—and almost one million barrels of contaminated oil tailings, destined for the headwaters of the Amazon—every day. The threat intensified considerably when the price of oil began its precipitous rise at the turn of the twenty-first century; without consulting the jungle’s 350,000 native inhabitants, the government set about leasing over 85 percent of its share of the Amazon to foreign oil and gas companies. The last straw was a series of environmentally detrimental decrees issued in 2008 by President Alan Garcia to prop up the free trade deal he’d just signed with the US. In April of the following year, 1,350 native communities shut down highways, river ports, and oil facilities across the breadth of the Peruvian rainforest, demanding that Garcia repeal nine of the most worrisome decrees. Instead, he sent troops to clear out the most worrisome blockade.

A different kind of fairness in the Amazon

Economic reasoning can vary across cultures. Take, for example, the Machiguenga of the Peruvian Amazon, a largely hunter-gatherer people who generated curious results in an economic experiment organized by researcher Joseph Henrich. Players, in pairs, were given a fixed sum of money. One was told to offer a portion to his partner. If the offer was accepted, the money was divided accordingly; if it was rejected, neither player received anything. Participants in an American control group and in similar experiments around the world usually made offers of close to half of the allotted sums. Offers of less than 20 percent were usually rejected. Machiguengan players, on the other hand, offered very small sums, which were almost always accepted. The Machiguenga had a different conception of fairness than their industrialized counterparts, and approached financial transactions with different expectations.

The deaths of thirty-three people and hundreds more injured at the Curva became a national scandal before the hills stopped burning. Some of the smoke even blew into Canada. The Globe and Mail published an editorial condemning Garcia for resorting to force, while the Canadian Council for International Co-operation, an umbrella group of NGOs, criticized our government for not doing the same. It was difficult to overlook the possible influence of Canada’s free trade agreement with Peru, just two months from implementation. Why would Stephen Harper pressure Garcia to tighten regulations from which Canada, a world leader in extractive industries, stood to benefit?

In fact, Harper had answered that question two years earlier. “There is a perception in [Latin America] that there exist only two models for development,” he said in an interview with Americas Quarterly in 2007, “one that is focused on social justice, the other on economic liberalization. Canada offers a different model, and illustrates that these are not mutually exclusive.” We should see no contradiction, then, in our government spending some $20 million in Peru to support the likes of the Office of the Ombudsman (which declared two of Garcia’s decrees unconstitutional several months before they provoked an uprising) or the Ancestral School Recovery program (which fosters traditional knowledge among the Awajun and Wampi communities behind that uprising) at the same time as it finances close to $300 million worth of Canadian business there, as was the case last year.

Some would submit that economic liberalization is itself a form of social justice. Sitting at a tidy café around the corner from the Canadian embassy in Lima, Stephen Benoit of Export Development Canada declined to comment on Garcia’s controversial decrees; but he did insist that much of Peru’s foreign investment trickles down to the poor. “The sheer number of people who have risen from poverty here demonstrates that something’s going right,” he says. Indeed, some three million Peruvians have been lifted out of extreme poverty in recent years, arguably due to trade-friendly policies so lucrative that the country maintained the world’s strongest stock market through 2009.

But Peru’s rising tide has yet to cross the Andes. “There is nothing for a young person here,” a twenty-one-year-old Awajun named Nixon (“Like the president!”) Nayap told me one baking afternoon as we putted down Rio Marañon, 200 kilometres downstream from the Curva del Diablo. The river still runs brown here, not black; elephant grass grows three metres tall along its banks; and the densely forested hills are unbroken, except for an occasional thin line of smoke where new land is being cleared to plant yucca, an Awajun staple. “It isn’t that we’re starving,” Nayap explained. “We have enough to eat—but that’s all. No schools, no jobs. If you get sick… ” He didn’t need to finish; research suggests that three-quarters of Amazonians will never see a doctor.

Eventually, our canoe drifted into the dock at Numpatkaim, where Joel Shimpukat returned after escaping the Curva. As with dozens of other protest organizers, there is a warrant for his arrest, but police seldom venture into the jungle. Given that he’s one of the few people in the village of 900 who speak fluent Spanish, it’s lucky in a way that he can no longer leave home. Inviting me into the thatch broadhouse he’d built overlooking the river, he picked a text—“Manual for the Political Economy of Socialism”—from one of the overburdened shelves against the wall and shook it, releasing a cloud of sawdust and larvae. “When I came home after all that time at the Curva, half my books had worms,” he said. “Need to pour a concrete floor.”

“We aren’t against development,” Shimpukat insisted, as we walked with a riotous group of his students up a rough creekside path—a route he planned to clean up as part of a bid for tourist business. Just as keenly, the kids scampered on and off the trail to bring me back small offerings: a piece of wasp’s nest, a plum-sized golden fruit, a live snake. “But the companies who have come to the Amazon so far,” he continued, “they suck out all the gold and oil and leave nothing but contamination. And the government is always on their side.”

Back at his house that evening, he placed a candle on the table, bathing the room in yellow light and drawing the night’s insects into orbit. Before the Awajun settled into villages like this one, he told me over a meal of yucca and plantain, they had been a warrior society that neither the Incas nor the Spaniards could subdue. “This is our home,” he said, gesturing at the jungle outside, invisible but audibly alive. “It’s all we have, and we will die defending it.”