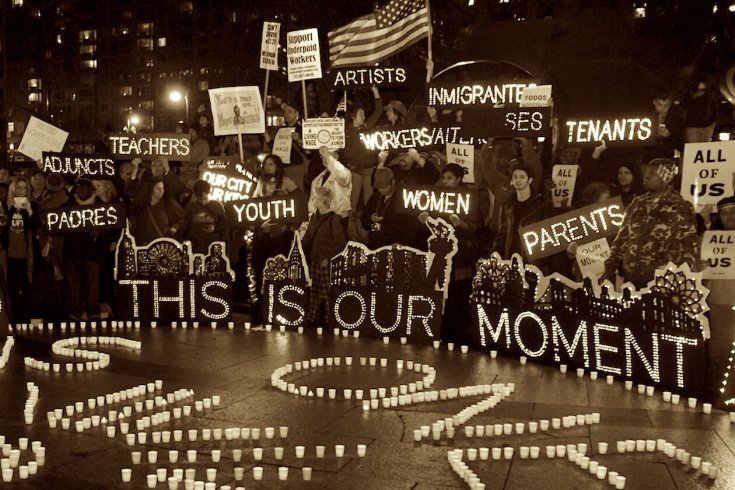 In the early morning of January 20, the day of Donald Trump’s inauguration, nearly 100 janitorial workers in Minneapolis went on strike. Together, they picketed outside of a Home Depot that, through a third party, employed janitorial workers for less than $10 per hour. The place and time were both strategic choices: two of Home Depot’s founders had donated millions to Trump’s campaign, and many of his campaign promises threatened these workers’ well-being. The strike, organized by the Centro de Trabajadores Unidos en la Lucha (CTUL), was a promise of union-led resistance—a deliberate first step toward protesting the new president’s anti-immigrant, racist and anti-worker rhetoric.

The strike also set the union’s action agenda for 2017. CTUL has since been part of the successful push for statewide wage theft legislation, as well as a city-wide commitment to raise the minimum wage to $15 per hour. These are huge wins for CTUL’s membership: most make poverty wages cleaning large retail spaces in Minneapolis-St. Paul. Many experience deportation threats at their jobs—a way of keeping them in line. They can’t afford to remain immobile.

Neither can many others. The intersecting and relentless attacks on working Americans has led to a resurgence of protest and struggle across the US. Unions have consistently organized to protect immigrant workers from Trump’s attacks. On May 1, International Workers’ Day, rallies focused on anti-immigrant policies. Tens of thousands marched in New York City, Los Angeles, Chicago and Seattle, and smaller rallies were held in dozens of other cities.

This renewed action presents unions with a timely opportunity—to not only become leaders of the resistance, but to amplify the power of broader social movements. There’s no doubt that in both Canada and the US, union activists are among the most engaged and committed people in progressive causes. Yet, they often operate in their own name, without the resources and expressed support of their unions. Unions themselves—as organizations—have not always been so active. When things get difficult or complex, unions too often disengage, fearful of the potential fallout, including criticism from membership and negative media coverage. But, by opting out, unions also miss the opportunity to demonstrate their relevance, flex their political muscle, and to defend communities in urgent need of their help.

The Trump era is unlike what most of us have ever experienced. From the threat of mass deportations to the threat of global war, parallels to the 1930s abound. Either unions will be part of the resistance, or they’ll fall further into the political abyss. I don’t use the word “resistance” flippantly. Unions in both Canada and the US need to be audacious in their struggle against far-right politics. After all, there are many similarities between a tyrannical boss and a tyrannical government. In both cases, that tyranny is diminished when there is a strong counter-balance that protects the people with less power. Tyrants, of course, know this. During the 1930s, the fascist governments of Mussolini and Hitler ended independent unionism early in their tenure. The labour movement was dangerous because it had access to resources, space, and, most importantly, workers who could mobilize against the country’s leadership. Unions still have all of those things—but they must choose to actively use them.

Unfortunately, the labour movement is far from consensus on what its role is, or should be, during difficult political times. In the US, executive members of the American Federation of Labor and Congress of Industrial Organizations (AFL-CIO) joined Trump’s manufacturing council; others are chummy with Trump himself. Is this because of, or in spite of, the state of decline in labour? And, what’s the difference when your country’s leader isn’t so easily painted as a super villain? Justin Trudeau’s popularity among Canadian voters makes him much harder to rally against than Trump. It’s more difficult for unions to demand—and gain public traction—for better support for working people, despite Trudeau’s many broken campaign promises. From the Phoenix Payroll disaster to Indigenous child social and health services funding, Trudeau’s record isn’t great, but his popularity poses a strategic challenge.

It doesn’t help that union activists are also confused about how to address his leadership. After a speech at Unifor’s national convention in August 2016, I was surprised Trudeau wasn’t hoisted onto the shoulders of his supporters and carried out of the room. Outside the hall, several hundred people mobbed him, asking for photos and hand shakes. A few months later, the Canadian Labour Congress (CLC) hosted a gathering of young workers. This time, when Trudeau addressed the crowd, delegates protested, turned their backs to him, and asked whether his promises were empty talking points. So, yes, challenging Trudeau isn’t easy. Neither is forming a clever strategy on how to do so, or acting on it. But it’s essential that unions figure out how to tackle this now.

This is the moment for unions to convince the public of their significance, and to take up the struggle for better protections of all workers—whether through direct action, like wildcat strikes, or through more formal mechanisms, like legal action or collective bargaining. And this struggle has to be multifaceted; single-issue campaigns are not enough. Protecting workers means fighting for better workplace conditions, but it also means fighting against racist immigration policies and defending public healthcare and the environment. It’s never been good enough for unions to focus solely on their membership and it’s in a moment of crisis where this is most evident.

The alternative to taking radical action is to wait until things get colossally worse, as the US demonstrates. Barely 30 percent of Canadian workers are unionized, and that number is in decline. At the same time, manufacturing jobs that used to give workers stability and a good pay cheque (and union membership) are disappearing. Part-time, precarious and non-unionized positions are taking their place. In the United States, barely 10 percent of workers are unionized, and it’s this minority who has the power to fight for higher wages, more job security and pensions. We must remember that the labour movement’s job is to win victories for all workers—while also explaining the role that the labour movement plays in a democracy. Where wider public sentiment—and support—lands depends entirely on what unions themselves are doing.

Hussan Yussuff, president of the CLC, issued a statement this week that ended with a call to action: “Every local, regional and national labour leader, political leader, business and community leader has a responsibility to ensure that today’s fascists are denied the support they need to survive. We must all commit to challenging the racism that is still too prevalent in our homes, workplaces and communities. And we must all publicly and unconditionally condemn fascism, and those who refuse to condemn it.

It’s strong, but it doesn’t give ideas about how unions could do this. The lack of institutional action on the left is aided by a crisis of imagination, creativity, and political will. How should unions step up and, in this case, “deny fascists the support they need to survive”?

There is so much that unions can do right now. To put Yussuff’s words into action might mean providing rally support, marshals, police liaisons, photographers or other personnel to make a rally a success. Or, it could mean offering the resources that nearly all unions have: a flatbed truck, a barbecue, a ladder, cloth and paint, access to a newswire service, a megaphone, media training, or a stage or platform for an event. It could also mean beefing up no-discrimination or refusal to work clauses in collective agreements. It could mean bargaining to force employers to give more to workers who work in the same space, but who are not unionized. Or, it could mean creating labour education modules that explicitly talk about fascism, democracy, racism, and white supremacy.

It could also mean looking at the work that Canada needs done now and doing it: offering resources and help to Indigenous communities, making money available to Black Lives Matter to hire organizers, booking off union staff to coordinate with anti-racist campaigners to map hate groups in a particular community. And of course, aggressively fighting for new members, a principle that all unions hold, even though they often lack the necessary resources to make organizing a true priority. With creativity and an active will, however, the possibilities are endless.

North America is struggling with very difficult, deeply polarizing issues. The principles and resources of the labour movement have never been more needed. But with a movement in decline, the question is no longer one of picking sides. Instead, unions must ask themselves: how are you going to fight for the people with whom you’ve already sided?