How Do I Talk to My Five-Year-Old about White Supremacy? | The Walrus
Skip to content 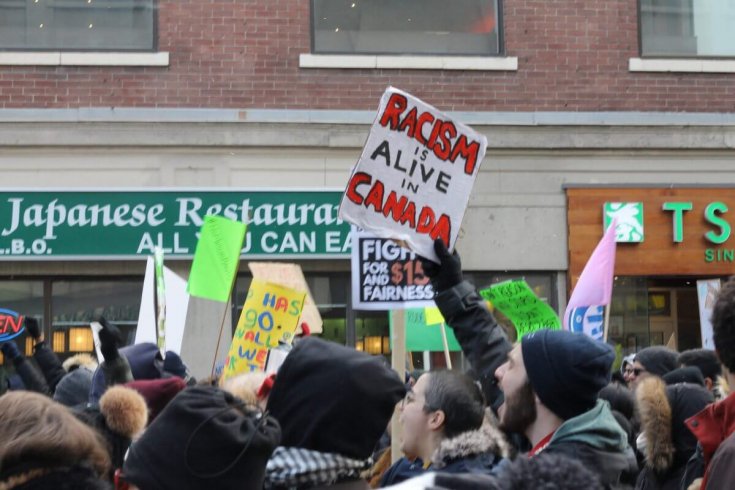 Photo of a protest in Toronto

“Those men marching with the fire … they aren’t coming here, right?”

My five-year-old daughter focuses her eyes on me, waiting, concerned. And I inhale. I try to use the time it takes for the air to fill my lungs to figure out how to respond. I’m supposed to be honest, right? But also, “developmentally appropriate” and make sure not to terrify her. But I also don’t want to be the privileged white mom who starts making a habit of minimizing or obscuring the realities of racism to protect her feelings. I need to stick to the facts.

And so, I ramble. I manage something about how there are people everywhere who hate and are angry towards people who are different than them, but there aren’t many and they can’t have guns here and they are white, like you and me, we’re also white, but we don’t agree with them at all and there are lots of white people, and of course lots of black people and all kinds of people, who are telling them they are wrong, and, don’t worry, they can’t hurt us.

She nods silently, her eyes still searching my face, still concerned. And I realize that semi-coherent rambling is probably not at all what qualifies as developmentally appropriate.

So what should I have said? What can a five-year old handle?

Rebecca Pillai Riddell, a clinical psychologist and professor of psychology at York University says that while it’s important to limit children’s exposure to scary content—maybe turn off the cable news channel when your kindergartener is in the room—she doesn’t agree that shielding kids completely is the answer. And, she warns, “you definitely don’t want to lie.”

Pillai Riddell, who has two daughters, aged seven and nine, tells me that it’s important to remember that children as young as my daughter still have “magical thinking,’” and can confuse fantasy with reality, but they also have a very strong sense of fairness and right versus wrong. She tells me to stick to simple facts and to use binary concepts like good versus bad, hate versus love, fair versus unfair. She suggests that if, for example, a very young child asks what a Nazi is, something along the lines of “they are people who hate a lot people who are different from them” might be all children are ready to understand.

“It’s about being simple, but honest, and about relaying on facts, not fear,” says Pillai Riddell. “At that developmental stage, the main thing they need to take away is that they are safe and we will protect them.” Pillai Riddel says a big part of avoiding fear is also to keep your own emotions in check around children when speaking about upsetting events. As a parent, she knows first-hand just how hard that can be. “I’m a woman of colour, and I was absolutely devastated when Trump was elected,” said Pillai Riddell. “I was up at 4:30 a.m. and just couldn’t bring myself to talk to them about it that morning—I had to go to work for the day and prepare myself.”

Nova Browning Rutherford, who identifies as mixed race and who has four-year-old twin girls, tells me that in her attempts to begin to talk about racism and white supremacy with her daughters, she has used the idea of greed. “I think they can understand that idea of ‘I want what I want and I don’t care if it hurts other people,’” says Browning Rutherford. “I mean, Swiper from Dora the Explorer is greedy and always stealing what isn’t his, so I think they can grasp this idea that some people want to take more than their fair share.” Browning Rutherford so far hasn’t addressed racial prejudice directly. “So far, I just say ‘people,’ not white people,” she says. “And I don’t want to brush anything aside, but sometimes I have to ask how far down this rabbit hole am I willing to go?”

Ah yes, the rabbit hole. Because if there’s one thing kindergarteners are experts at, it’s asking “Why?” With my own daughter, after I told her the white supremacist marchers were “very angry,” she immediately asked, “But they’re grown-ups; why can’t they just stop being angry?” And there I am again, hearing myself say, “Just because, some people never learn how to stop being angry and be kind to other people.” I try to remind myself this is just the beginning. That while my responses seem pat and insufficient at this stage, that is how it needs to be right now.

My friend Natasha Steer, a social justice educator and a single, bi-racial mom to a 13-year-old son who is the kind of thoughtful, intentional parent I aspire to be, reminds me, “You don’t have to do everything right now, so don’t get caught up in trying to check all the boxes.” She’s right. My job now is to lay a foundation for what’s to come. “Learning about systemic racism, is a long-term process,” says Steer, who is very good at finding the “teachable moments” in everyday life, from pausing a TV show to ask, “What did you think of what that character just said?” to calling out racist comments in front of her son.

Talking with Steer, I’m reminded how important it is to make sure to look for those moments and to be conscious about the books I’m choosing, the stories I’m telling and the way I’m interacting with people in the world. Explaining who those extremists are on the news is only a tiny piece of the puzzle. Margaret Hagerman, a sociologist at Mississippi State University, whose research focuses on how white children learn about race, says that in her research, she found that children are deeply attuned to parents’ everyday actions; they notice when they lock the car doors and avoid stopping in a “bad neighbourhood,” when most of their parents’ friends are white, when they smile awkwardly at a racist joke at a family function. Whether we want to admit it or not, “we are all constantly participating in a process of racial socialization,” says Hagerman.

So, no matter how perfect an analogy for hatred I can concoct, or how many developmentally-appropriate books about social justice activists I keep checking out of the library, it’s what my children see in me that is going to stick. I need to get serious about recognizing my own biases, prejudice and blind spots and put more effort into pointing out moments of everyday racism. White supremacy, after all, is not just the rallying cry of a bunch of angry extremists, but also a longstanding system of oppression that continues to give white people, like us, specific benefits and unfair advantages.

And, although I know I need to do a better job of monitoring how emotional I get about the news in front of my young children, I also think that, as they get older, it will be okay for them to see me get upset sometimes. They need to understand, that, as children who have my husband’s Jewish last name and who love to light the Chanukah candles and celebrate Passover with their Bubbe, that when the neo-Nazis shout anti-semitic slurs, they aren’t just hating “people who are different,” they are specifically hating people like our family. I want them to understand that it’s normal to be angry about injustice, and that we can turn those feelings into action. Because the truth is, those men with torches might not be here, in Toronto, today, but white supremacy and racism certainly are. And, at some point, I want my kids to take it personally.

I want to show them that those people resisting aren’t only civil rights activists of the past, or brave young students on university campuses facing down guns, or Indigenous women occupying the path of a pipeline. They are also masses of people who know what’s right and what’s fair and who step up and fight for justice every day. They are people like us.

Kalli Anderson is an award-winning freelance audio producer, writer, and filmmaker based in Toronto. She is an assistant professor at Ryerson School of Journalism.