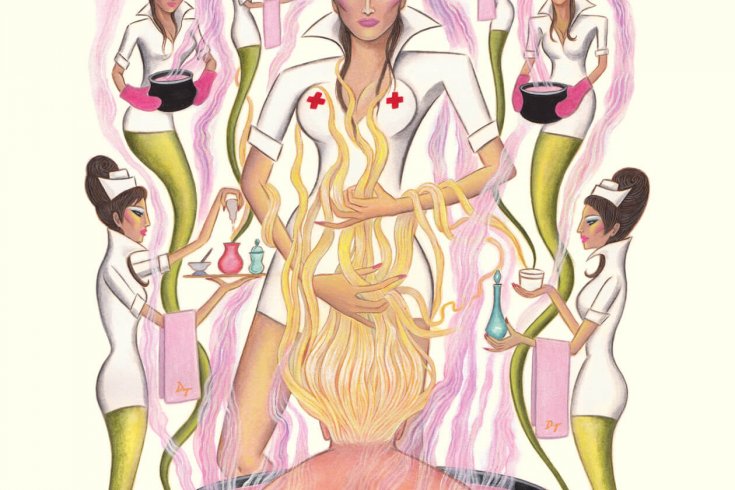 Last night I dreamt I went to Mar-a-Lago again.

I stood, shuddering at the gates—was I to be the mistress of an estate named in colloquial Spanish?

Then, like all dreamers, I simply glided across its jade lawn and nacreous ballroom, over its woven tiger pelts and tongue-and-groove, ship-plank kitchen floor, toward my Manhattan penthouse’s titanic washroom where I began preparing my husband’s petit bain.

As he sleeps, his lips purse, and his hands fly out, defensively.

And his hair, my treasure, luffs in the winds of his dolour and lies, like a limpet, on the millions of spun-silk filaments that devise his down-filled, eucalyptus-tinged pillow.

Donald is not fussy about his hair: shortly after we married, I caught one of the maids cutting it under a soup bowl with manicure scissors.

Then his former hairdresser, une salope, told the press that it was very long, “solid and matted,” and I quickly took over this industry.

“It is your power,” I tell him, as the first jet of hot water spells this and other, more magisterial, words against his temples.

I roll the cauldron into his massive washroom, where the tiles light up like in Dance Dance Revolution and release gusts of heat and Tom Ford’s Black Orchid.

Slipping into a tight, clinical white frock with red crosses over each breast, wearing white patent-leather spikes and a peaked cap, I pour scalding water into the cauldron from the sinks’ nozzled gold boar heads.

Then with a small iron trident I stir essential oils (marjoram, peppermint, star anise) and various items from the jars in my Vuitton travelling case: eye of newt, hemlock powder, cats’ claws.

I select Russian Amber Imperial Shampoo and Conditioning Creme, for their ingredients of nettle, grapeseed, and rosemary, and for the price tag. At $322 for the pair, after so many years, it still makes me prone to wondering aloud what the “TRESemmé people are doing” that day. I allow myself this vulgarity because it makes my fractious husband smile.

Finally, there is the vial—snatched from Ivana’s beehive, years ago—three viscous drops, and the finishers: honey, lemon, and Dinaric Alps white creams, and a hairspray of my own devising, so strong that it creates its own, necromantic atmosphere—a blister of tiny brooding vultures, washed in pale midnight.

For more extensive sessions, there are pigments and dyes, but today is just another day in the penthouse, with Barron lashing the maids with the sweet cat-o’-nine-tails I gave him for his birthday, and there is my husband—

He lumber-glides toward me, his faintly glossed lips pursed from the get, stamps my mouth, and begins to perform his ablutions as I and two of the butlers haul in his reclining chair and the bag of masks, bamboo cloths, and baby chick–soft towels.

Donald is a visionary. Not the sort of man I imagined myself with, growing up in drab little Sevnica with pictures of Kirk Cameron and Scott Baio on my walls (how I longed for them, in each of the five languages I speak: Pridite v živo z mano in moja ljubezen!).

And if Donald does not quite share their stormy good looks, he has a bearish handsomeness I have come to love to say nothing of our belle/bête duality.

“Today, I wish my hair to look like the war-torn landscape of Aleppo,” he says, sinking into his calfskin lounger.

“With a Young Turk flourish, an inexplicable field of mustard grass, and a slice of cake depicting me in profile, disparaging a corrupt media.”

This is not a problem.

Donald’s hair always looks pretty much the same, if shifting divergently, like the Earth’s plates. I gown him and mask his eyes, insert a rolled Turkish towel behind his neck, and begin bathing his now-crispy, sulphurous mop.

The potions from my ved’ma bag are harsh, initially: the offerings of Russian wolves, their heads lowered with exhaustion and fear. I snap my fingers and they leap through the window I then slam—

“Honey?” Donald asks, and I immediately sink my hands deep into the flambé, deftly creaming out the flames and easing the kinks and tangles.

As I work, I close my own eyes, and begin to fret, again, about my dress. We will be attending a reception in St. Petersburg, in the heart of the Mikhailovsky Palace, and top designers are, again, refusing to support me: a heart-breaking turn in my magical story of rescue, transformation, and violence.

“Just ask whatshisname, that drunk bigot,” my son-in-law Eric suggested, after presenting me with the unborn calf of an elephant, mounted on a mahogany shield.

But even Galliano is steering clear.

Ivanka has offered me pieces from her line, but my God, am I still to be a Slavic peasant?

“Entschuldigung, Liebling,” I murmur, and release. His famous coif is untangled, limp and glorious. All of his bizarre thoughts—of taco-shaped penitentiaries, of rubber fetus dolls, of the searing of his exciting new family crest, Trumpini Calidi Sunt, that is, TRUMPS R HOT, into the clear-cut Brazilian rainforest—have dissolved into thrilling aromas and squeaking wet slicks.

And now the architecture: starting from the base, I scour his head with a Viatek HairPro Laser Hair Brush to stimulate his scalp, then roll small strand after small strand onto a Spornette Prego round brush, and alternate with my own line of product.

“It’s a beautiful morning for actresses with fat ankles,” I see him begin to tap onto his Twitter, and seize the phone.

“Relax,” I instruct him, kneading a scalped honeycomb into his skull—brushing, atomizing the unctuous tears of his enemies, brushing, volumizing each strand with the balot of a Laysan teal we keep in the foyer’s waterfall.

My dress! I think, as the little diva inside me opens her throat and sings (it is always the same aria, perchè, perchè, Signor, ah, perchè me ne rinumeri così?”—a different Fach each round and spinto, always spinto).

“Lemme go,” my husband says as I blot my soaked face, and he tinkles, seated in the corner on the heated golden toilet.

Angered by the shifting, specious loyalties of fashion designers I imagine myself standing defiantly at a benefit filled with world leaders, alongside soldiers and princesses, gowned in a Hefty bag with MRS TRAMP torn into its black bodice.

“S’amatter,” he says, returning to the chair, a few tiny Velcro curlers loose. “The dress, my perfect dress,” I sigh, deeply, and his already-orange face intensifies.

“Tell me their names,” he says.

I won’t let him maul them, or do worse: through the window, the pale-blue eyes of the wolves shine, ominously.

“I will look good in a Uniqlo fleece and leggings,” I say, flipping my long, ambrosial hair.

We smile, and he replaces his mask again, as I move into the molding stage. It is an art I dare not describe. Suffice it to say I daub each finger in one of my solutions, bury my hands to my wrists in his hair, and liberate whatever beautiful and terrifying creature is discovered therein: I feel an imploding pyramid, the ruins of a sun-dappled mosque, and a raging griffin, its claws filled with living molten anger, its saffron tail switching.

Then spray and spray, et voilà!

Opening my eyes, I expect to behold the usual, yet slightly altered, shellacked cream puff. Instead I see that he has conjured up a hammered gold dress, made of thousands of layers of tulle, wrapped tight at the bust and filigreed with real gemstones.

Carefully, I accept my treasure from his lowered head, and quickly replace it with the Kenny Rogers wig he likes.

Power courses between us in lightning bolts.

I kiss the large, generous lips of the man I love and he holds me as I spin like a burning Pavlova.

Imet donald trump at a party, and he asked for my number.

“No,” I said. I turned away, and that was the start of the chase. I waited until he gave me his number, all of his numbers.

Then I waited until he bowed and laid, at my feet, the world. And gold and jewels and secrets enough to destroy it.

We stand and dance, slowly, to something an exhausted Billy Joel is playing near the bidet.

I know what you think: he’s a pig. You smell between his legs as he thrusts and missiles detonate; you tremble at the cast of his cyanotic blue eyes.

You blush when he breathes, Satania into the pink slit above your earlobe; you start humming—

In Slovenia, le bon diable cares not for this world.

He has created a Paradise, far from the excavation of Atlantis and Studio 54.

He loves only beauty and pleasure: you pray to him each night with your hands between your legs.

Until you wake to find another of his humble offerings, a canopy of flowers he has commissioned from a botanist: Melania is a rugged creeping vine with magenta thorns, downy, dappled leaves, and luscious, snapping petals.

Then his rough tongue rolls you like a plate in a turquoise pool, chiming; he is wearing nothing but a strand of your pearls and a quiver.

And you pull the arrow from your gory heart and all of its seams rip, releasing train after train of red satin, red silk, red dotted swiss that le monstre rolls in, his dagger nails carving chérie into your back as you scream like his sleek, freakish prey—such is our intimacy, terrible and deep.

Just as he will scream at Mar-a-Lago, soon enough, when he discovers you in the garden, draped in the garments of nine suddenly dead designers (the wolf attacks will have been in the news for weeks), digging pansies from their beds with the heel of my baby-leopard shoes, the ones I drive into him as I whip and whip him until he cries out, “Christ, that’s it!”

He almost feels something in that moment, and weeps that his angel has brought him this close, closer each time, to what is abject in the filthy well that once was an ocean.

To what is beautiful in the radiant bones and phosphorescent heads of all the dead plating its pitch-black guts.

His hair will be a shining tigerfish: I am the bird he snaps at, maddened, sick of love.

This originally appeared in the April 2017 issue under the headline “It Is I Who Styles Donald Trump; or, Chérie (de Melania Knauss-Trump).”

Lynn Crosbie has written five books of poems and teaches at the University of Toronto. Her new collection of poetry, The Corpses of the Future, will be published this spring by House of Anansi.
Roxanna Bikadoroff