Invasion of the Killer Bugs | The Walrus
Skip to content 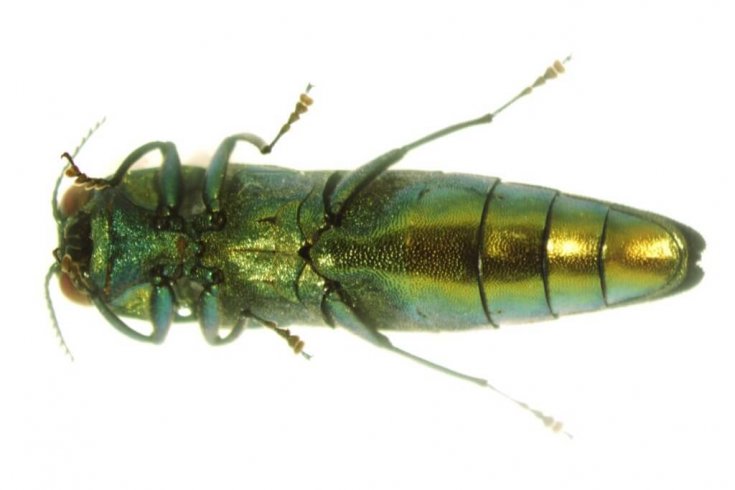 It smells like a high school science class. I hang my coat on a rack near trays of dead wasps and vials of larvae, and follow Douglas Parker and Bruce Gill, Canadian Food Inspection Agency entomologists, into the back room of Building 18, a small brick structure on Ottawa’s Central Experimental Farm. Gill, round faced, beard to his sternum, holds up a chunk of four-by-four lumber riddled with holes.

“These are made by giant weevils that live in China and Korea,” he says. “Here, I’ll show you the critter.” He dons glasses that disconnect at the bridge with magnets (like the ones that clever coroner on CSI wears) and opens a drawer full of dead bugs pinned to Styrofoam. “There: Sipalinus gigas.” He points to a brown beetle with a long snout, then inserts a pinky tip into one of the wood holes. “That’s the damage the larva makes boring into the wood for food. It chews up the tree and kills it.”

Those weevils aren’t devouring Canadian forests—yet—thanks in part to a quartet of CFIA bug sleuths, including Gill and Parker, whose ceaseless hunt begins in foreign soils and ends here, at this identification lab in Ottawa. The process is complicated: it involves Latin, and muddy Chinese forests, and the mysterious machinations of nature. But despite heroic border prophylaxis, foreign bugs do creep into North America. That’s a problem.

The United Nations, which declared 2010 the International Year of Biodiversity, says our health and our economies depend on preserving the planet’s varied roster of plants and animals. One of the biggest and fastest-growing threats to biodiversity comes from alien invasive species that commandeer natural ecosystems—plants and animals once contained by mountain ranges and oceans but now dispersed globally through trade.

The only good bug is a dead bug

Sci-fi pests aim their mandibles at the human race

From the Book of Exodus through to Kafka, bugs have often been characterized as hyperbolically inhuman, mankind’s ultimate foe. But Robert A. Heinlein’s 1959 novel Starship Troopers, which sees a futuristic Earth at war against the arachnid empire of Klendathu, provides the definitive depiction of bugs as a malicious, otherworldly menace. The novel is a favourite among US military recruits, and Heinlein has been accused of using the one-dimensional creatures as a straw man enemy to serve a quasi-fascist agenda. Paul Verhoeven’s 1997 film adaptation turned this reading on its head, satirically rewiring Heinlein’s politics. In it, military ads encourage schoolchildren to stomp on terrestrial insects, and war-scorned humans growl, “The only good bug is a dead bug.”

Which brings us back to Bruce Gill’s chunk of lumber, a typical example of wood dunnage used to protect and secure containerized goods during overseas shipping, and which often harbours insect hitchhikers like the emerald ash borer, a fetching green jewel of a beetle that has killed millions of ash trees since it was discovered here in 2002. It’s rare in its native China, but with no predators or parasites in Canada the population has exploded. So has our trade with that economic behemoth. Last year, China shipped over four million tonnes of containerized product to Canada through Port Metro Vancouver—more than six times that of the next biggest inbound container client, South Korea. Trouble is, China has a similar climate and flora to ours, which means Chinese insects can survive our winters and eat our plants.

To locate these tiny trespassers, port inspectors pick through containers with knives and magnifying glasses, and sometimes even rappel into empty ships with headlamps to peek into cobwebby corners. Because of the gargantuan import volume, they must target exports from temperate countries and wood product shipments or goods on wooden pallets, such as engine parts or granite slabs. Despite pest control regulations and international efforts to eliminate wooden packaging, miniature stowaways persist. If discovered, they’re immediately couriered to Parker and Gill, and the shipment is quarantined and fumigated.

Of course, Canada is not blameless in this nefarious exchange. “North America gave China the red turpentine beetle,” says Parker, a jaunty fringed scarf looped around his neck. “That’s just killing their pine forests.” The round-headed apple tree borer, detected by German plant protection authorities last year, was probably our fault, too. Gill thinks the culprit might be saskatoon berries, a relatively new export to Europe.

Parker, Gill, and their team examine a whopping 15,000 bug samples annually in their wee lab. Packages arrive from the aforementioned port inspectors and from citizens concerned about unusual bugs in their backyards, as well as from bulk samples collected in CFIA traps set in myriad locations across the country to catch settlers. That’s how the European oak borer, a cousin of the nasty ash borer, was discovered recently: in a sticky trap near London, Ontario. To follow that story, we cross the laneway to the K. W. Neatby Building, which houses the Canadian National Collection of Insects, Arachnids and Nematodes (one of the five biggest dead critter collections in the world) and a few dozen of the country’s top entomologists.

Habitually hunched over microscopes and wearing de rigueur socks and sandals, each scientist here has a specialty, be it dust-sized fairy flies or giant moths. Most work directly for the CNC, but two of them, Eduard Jendek and Vasily Grebennikov, fill out the core of the CFIA’s bug squad. Jendek, a visiting post-doc from Slovakia, is a leading expert on the European oak borer and thousands of its look-alike relatives. He sits in a bunker of insect trays, hand-writing the Latin names of pinned specimens on Chiclet-sized labels.

Within days of recognizing the oak borer from that London trap in 2008, he was bushwhacking through the oak savannah of Pinery Provincial Park, near Sarnia, with sweeping nets, axes, and knives. It was late in the season, so he found only a few dead females but also a larva he reared into an adult. What he didn’t find was an oak slaughter, which means the oak borer isn’t ruinous at this point. And maybe it never will be. Nature is unpredictable that way. Some alien species die off; many integrate harmlessly. Others lie in wait for years until ideal conditions trigger a population eruption.

Considering that countless alien bugs invade Canada annually, the best CFIA entomologists can do is try to identify intruders quickly and understand their behaviour. It’s a monumental task: the Asia Pacific region alone has an estimated 10,000 potentially invasive plant-eating beetles. Which is where Grebennikov joins the pursuit. A gentleman scholar with the goatee and high cheekbones of a young Lenin, he is identifying those beetles one set of microscopic male genitalia at a time. Hired specifically to expand our knowledge of potential pests, he’s spent a couple of months each of the past three years on reconnaissance in Asia, collecting bugs that might end up here one day. He’s already flagged some 250 potentially harmful beetles, including several dozen new and unnamed species—feisty feeders who would simply do what comes naturally when presented with a Canadian smorgasbord. And who could blame them?

Grebennikov scrolls through digital photographs of some recent finds in China, wondrous wood-boring assassins with bumps and stripes and fuzzy backs. “Look at this one—ahh,” he says with a sigh, formality melting into giddy devotion. “Part of my drive is aesthetic beauty. Why should I be discreet? I like them.”

From the Book of Exodus through to Kafka, bugs have often been characterized as hyperbolically inhuman, mankind's ultimate foe. But Robert A. Heinlein's 1959 novel Starship Troopers, which sees a futuristic Earth at war against the arachnid empire of Klendathu, provides the definitive depiction of bugs as a malicious, otherworldly menace. The novel is a favourite among US military recruits, and Heinlein has been accused of using the one-dimensional creatures as a straw man enemy to serve a quasi-fascist agenda. Paul Verhoeven’s 1997 film adaptation turned this reading on its head, satirically rewiring Heinlein’s politics. In it, military ads encourage schoolchildren to stomp on terrestrial insects, and war-scorned humans growl, “The only good bug is a dead bug.”