In Horror Movies, Mothers Are the Ultimate Monsters | The Walrus
Skip to content 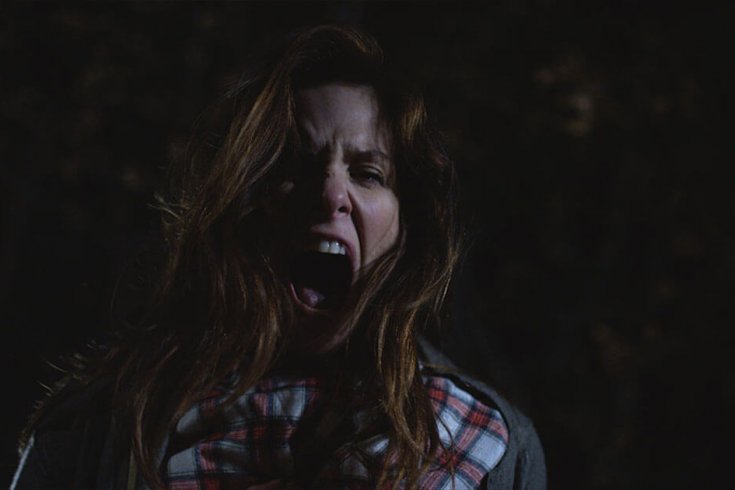 A scene from the Canadian horror movie Latched. Photograph Courtesy of TIFF

Latched is set in a remote cabin surrounded by pristine forest. In the opening scene, Alana, a single mother and work-obsessed choreographer, dances as her giggling baby son, Bowen, watches. Her movements are free-flowing, the wooded area whimsical. The short film, directed by Toronto-based filmmakers Justin Harding and Rob Brunner, doesn’t immediately feel like a horror movie. Alana is on a holiday, and the wilderness is meant to offer much-needed tranquility and creative inspiration. As it turns out, it’s also where she’ll be fighting for her life and the life of her child.

Latched premiered this year at the Toronto International Film Festival, and it’s one of three horror films that also premiered there this year to explore the mother-child dynamic. In another, Pyewacket, a daughter plots to murder her abusive mother and awakens a dark evil as a result. And in the third, The Crescent, a grieving mother retreats with her baby to a creepy, isolated home. It’s worth mentioning that men directed all of these films—as they do most horror movies—which adds an extra layer to the generally troubling misrepresentation of the mother-child dynamic, a popular movie sub-genre that’s dubbed “maternal horror.”

Many iconic horror films fall into this sub-genre, including The Exorcist, Rosemary’s Baby, and Friday the 13th. In each, motherhood is presented as inherently scary. These movies understand that even without blood, monsters, and ghosts, motherhood frightens us. We are afraid of the idea that a mother would do anything for her child—and as much as we encourage this self-sacrifice, we also tend to punish it. Mothers are shown as weak, desperate, extreme. Horror movies suggest that, if they could, mothers would do things like murder their son’s fellow campers to avenge his death. They would, in fact, do anything for their children, including becoming monsters themselves.

Even when mothers are allowed to be heroes in horror, they are not often portrayed as strong or even good. For us to accept them as our heroes, we must also exploit their stereotypical shortcomings. In the classic horror flick Nightmare on Elm Street, for example, the main character, Nancy Thompson, discovers that Freddie Krueger is after her because of an instrumental part that her mother, Marge, played in his death. But Marge is also depicted as an alcoholic desperate to escape reality—a strong contrast to someone like Jamie Lee Curtis’s iconic role as Laurie in Halloween, a non-mother, who may be shy but is also clever and strong. Even when mothers do help save the day, they must do so while being troubled, even bumbling, and largely unsympathetic. We don’t often give motherly heroes a chance to appear stable and strong.

Take The Shining, which, incidentally, Latched co-director Justin Harding listed as an all-time favourite horror film. Wendy, played by Shelley Duvall, is an undisputable hero. She saves her child, against all odds, in a frightening and isolating environment. But she’s also a mother who’s hard to stomach. She’s nervous and jumpy even before the real horrors begin. Just like Marge in Nightmare on Elm Street, Wendy is a dysfunctional mother at best. You could be forgiven for not finding her likeable—that age-old trap for women characters. We see this again in Scream, another hallmark of the genre. Sidney Prescott’s relationship with her dead mother, Maureen, and Sidney’s desire to get revenge for Maureen’s death, is a driving force in the film. Yet, Maureen is portrayed as promiscuous and untrustworthy. As viewers, we’re supposed to be on Sidney’s side, but we are also supposed to have ambiguous feelings about her mother.

Watching the mother-child dynamic in horror often feels like watching a cautionary tale. It’s no coincidence that horror-movie moms are almost always tragically flawed. Marge and her alcoholism, Wendy and her nervous passiveness, Maureen and her infidelity. For centuries, real-life mothers have been blamed for social ills, both perceived and real. Mothers who work are neglecting their families; mothers who don’t work aren’t contributing to society or progressing the women’s movement; mothers who try to do it all are just kidding themselves. We plaster celebrity mothers on the covers of magazine and put them on informal trials: Are they good mothers or bad mothers? Are they worthy mothers? Are they capable of protecting their child? Will they make the right sacrifices, and often?

If horror movies are warnings, then they also act as our prescriptive fantasies for what happens if you’re a “bad” mother, if you don’t pay attention to what your kid is doing, if you opt out of the nuclear family dynamic. They say: be better or, essentially, be punished. Horror movie audiences are encouraged to feel critical of mothers. We might ask, “Will the monster win?” but it often feels like the true questions in horror are the same ones we ask of celebrity mothers, and of mothers everywhere: Are they good enough? Is everything bad that happens to the child the mother’s fault? Just as in real life, it seems, mothers are held responsible for anything and everything, no matter what they do.

Horror has long been accused of being a genre riddled with misogyny—and rightfully so. It’s rife with the sexualization and brutalization of women. As a staunch feminist, this makes my love of the genre challenging. I’ve loved many of the (undoubtedly) problematic horror movies I’ve seen, but I can’t help but criticize them while I watch. Rather than ditch the whole genre, though, I want to see horror evolve. I don’t want my love of horror to always exist in contradiction with my feminist politics. I want to have my scary cake and eat it too. I want these movies to retire the tragic, tortured mother device and stop demonizing women. Putting women to the ultimate test, over and over, is a weak foundation for the genre; it’s time to start building horror movies on something stronger and more interesting.

For a feminist horror fan like me, Latched offers hope. It takes a different route through the mother-child dynamic, which is what makes its take on maternal horror so refreshing. For once, the plot is not a sensationalized distortion of the tortured mother—someone we are rooting both for and against. Alana is neither a suffering heroine with a tragic backstory nor a perfect multi-tasking mum. She is a regular person. A person with passions, creativity, and career goals who also has a child whom she loves and of whom she takes care. She’s a mother who does household work, because, regardless of gender, we all have to take care of our living space. She brainstorms choreography because it’s her job. Latched takes an overused, sexist trope and complicates it, and, in doing so, makes Alana feel real.

More than that, the film also uses breastfeeding as a central part of the plot—adding complexity and thoughtfulness to what it means for a child to survive. This makes Latched unique, and not just when it comes to the horror genre. Breastfeeding is a reality for many mothers, and yet it is still often seen as a taboo public act, one that is rarely captured onscreen. Here, though, it avoids the typical pitfalls: it isn’t seen as sexualized or portrayed as disturbingly tragic. Alana is not, for instance, breastfeeding while reclining in lingerie or breastfeeding while crying and smoking a cigarette. Rather, the scenes are soft and nurturing. Most important, they are real—literally.

The mother and son stars of the film, Alana Elmer and Bowen Harding, are the actual wife and son of co-director Justin Harding. This infuses the film with an authenticity and intimacy—both things that only intensify the terror as Alana fights for survival. As audience members, we see mother and son bonding skin to skin, and then we see a terrified mother running through a dark, confusing forest, away from a creature that is hunting her and her son. “It was just a custom role designed for her [Alana] specifically, it was never cast,” says Harding. “It’s Alana’s real son, and she’s really breastfeeding on camera, he’s not acting at all. We’re capturing a real performance.”

Latched also stands out in how it tackles a popular characteristic in mother-child centred horror films: the absent father. The Crescent, Latched, and Pyewacket all have absent father figures—either dead or not in the picture. This, too, is a trope. If mothers and motherhood scares us, single motherhood is downright terrifying. This state of motherhood lacks the nuclear family structure that we’ve been taught to believe is safe and secure. An absent father automatically creates a feeling of discomfort for viewers—something is simply off, a mother is alone. We also don’t like to believe a woman can do it on her own. Or, rather, it’s scary to see a woman not aided by a man; it’s scary to think that a woman may not need a man.

But in Latched, the absent and unhelpful father is a footnote in the film. He’s mentioned, but he isn’t presented as a gaping void in Alana’s life. In contrast, other horror films use an absent father figure as the determining factor in a mother and child’s dysfunctional relationship. It’s not a defining aspect of Alana’s relationship with Bowen, and they seem to be fine on their own—aside from the gruesome-looking fairy monster that is hunting them, of course. In fact, only Alana can save her baby from this creature. She possesses something that no one else does—I won’t divulge any more, though!

Though Latched is unique and subversive, it also made me want to see more female directors in horror, a genre where they’ve been largely excluded. What would a woman’s take on the mother-child dynamic look like? Or the relationship between a father and his child? Though horror is making strides—albeit slow strides—towards inclusivity, diversity in its directors is the key to ditching the same overused tropes. Furthermore, portrayals of motherhood for women of colour are nearly nonexistent in the genre, which is overwhelmingly white. This has all left a huge void and vast untapped potential for both excellent scares and excellent social commentary. Still, all three films are worth watching for the way they push audiences into asking themselves what it is about motherhood that makes us all so spellbound—and horrified.

Hana Shafi (a.k.a. Frizz Kid) is a writer and artist. Her first book, It Begins with the Body, was listed by the CBC as one of the best poetry books of 2018. She has published articles in Hazlitt, This Magazine, and Torontoist. Born in Dubai, she immigrated with her family to Mississauga, Ontario, in 1996. She lives and works in Toronto.