Imagining a Steampunk Internet | The Walrus
Skip to content 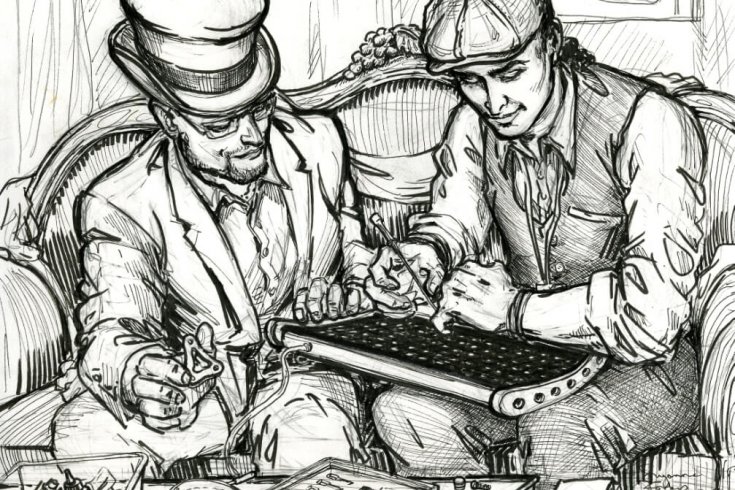 In the undeservedly obscure 1913 book, Bohemian Days in Fleet Street , a veteran English cultural critic (listed anonymously as “A Journalist”) provided a rich description of his life as a London newspaperman in the late nineteenth century. While this extraordinary work—which is the subject of Jonathan Kay’s Editor’s Note in the October issue of The Walrus—consists almost entirely of memoir, it ends with a brief, but tantalizing imagining of news delivery in the (then-far-off) year of 1960.

At present the newspaper habit appears to be strong, inherent, and hereditary, in the British people. But is the habit really as deep as it is widespread? With men of the world the habit does not even persist. The man of the world seldom reads a newspaper. He will take a copy up, and give a glance at stocks or at starting prices. In the smoking-room of his club he will use the daily broadsheet as a screen [when] he is sleeping the sleep of the just-tired.

Society will, however, always want to know what is “going on,” and the end of the transition period of journalism upon which we have entered will be heralded by the introduction of a contrivance original scientific and up-to-date whereby the latest intelligence shall be distributed with increased certainty and celerity, and at a moderate cost.

The new contrivance, we may cheerfully assume, will make no use whatever of paper or printer’s ink. Science will have exposed the insanitary effects of a continuous matutinal contact with these obsolete media, and the common-sense of the community will at last have discovered their curious inadaptability. The newspaper microbe will become as familiar a topic with the public as the lobster. Medical Officers of Health will “come down on” insanitary journals, even as in our own time they “come down on” defective drains.

When the transition period shall have come to an end, and when the newspaper, as we know it, shall have come to an end, too, the disseminator of news will, it may reasonably be anticipated, appeal directly to the ear, and not to the eye, of the public. Nay, seeing that to science nothing is impossible, may we not be enabled to absorb our news without fatiguing either ear or eye? We may be taught to “take it in through the pores,” like Joey Ladle.1

The eventual solution of the difficulty will, doubtless, come to us from the element responsible for most of our modern miracles. An adaptation of wireless methods with the telephone seems to be indicated.

The newspaper office of the future will be a vast exchange, an enormous central depot, from which the news of the day will be transmitted to scattered subscribers. At these central establishments, the news of the world will continually pour in. Skilled hands—the old sub-editorial hands—will winnow it, prune it, classify it, and, generally speaking, make it ready for the million receivers of the subscribers. Happily, the new order will involve little or no abrogation of the functions of the journalist.

The editor, of course, is doomed, for the public will pay for news, and not for notions. But even under the journalistic order as we know it the power of the editor has become more and more circumscribed. He has been going for a long time; soon he will have gone. But the position of the staff should be enhanced. The journalist, who must reappear under some other title, will be brought more under the personal control of the subscriber. Errors in collection or transmission will, as in other departments, be traced to their source. The members of a staff will no longer find shelter behind the impenetrable anonymity of an editor. They will have less kudos, but they will have pay. They will have become the servants of a sound commercial undertaking, and they will have ceased to talk of themselves as “the Fourth Estate of the Realm.”

The processes of evolution are very gradual, and go unrecorded. How long will this one take? A century? Half a century? Shall we tie ourselves to a date, and fix upon the year 1960 as the time of the great consummation?

Let us imagine the passage of the intervening years, and seek out Jones in the suburbs, the suburbs in 1960 meaning an area of twenty-five miles from the City. Jones descends with all his accustomed pomposity to the wife and olive-branches assembled in the breakfast-room. He acknowledges the salutes of the family with the semi-regal affability, which is one of his most engaging characteristics. He looks through the window, and notes with satisfaction that his aeroplane is moored to the aero-railings—shall I say?

Then he seats himself at the breakfast-table and places the “receiver and communicator” in position at his side or rather, at the side of his plate. This insignificant implement is of silver or of gold or of inferior metal, according to the tastes of the subscriber. It is the “last word”—as far, at least, as 1960 has gone. It sucks in from the ambient air the news sent circulating from the central depot, and by a most ingenious contrivance it will record only such news as is demanded of it. This selection is regulated by a curious arrangement of “stops.” There is the “City” stop, the “Parliamentary” stop, the “Courts” stop, the “Racing” stop. Jones, you may depend, turns the “City” tap on before any other. In answer to his inquiry as to the prices of certain stocks, he obtains an immediate answer. He next inquires as to the result of last night’s debate in the House of Commons. He does not seek after sporting intelligence at the breakfast-table—bad example to the boys, he considers it. Thus the news is gently murmured to Jones as he eats his ham and eggs; for, in spite of the advance of science, the middle-class breakfast-table of 1960 is the middle-class breakfast-table of the early Victorian era. Jones digests his mental pabulum as he masticates his food.

Jones rises from his place, hastens out to his aeroplane, and is soon purring along to Tom Tiddler’s Ground.2 Being a considerate paterfamilias, he leaves the “receiver” at home for the use of the family. His unselfishness in this respect may be discounted by a consideration of the fact that he has another “receiver” at his office in the City.

The family gathers in turn around the little implement—scarcely bigger than a Jew’s harp it is—and apply to the vibrating atmosphere, now charged with intelligence hot from a thousand sources, for items suited to the domestic hearth. The boys have, I will suppose, had a first “cut in,” clamorous about starting prices or cricket. But the interests of the ladies are more various and more widespread. They would know, for instance, who is married and who dead? What is going on at the theatres, ad what at the Court? How is Society conducting itself? There is no scandal about Queen Elizabeth, one may piously hope? How shapes the gossip of the day, and is there an announcement of any Great Pink Sales?

In ten minutes they have learned all that the heart of woman can desire to know, and they have satisfied their legitimate thirst for knowledge without having had to prosecute a weary search through the unwieldy pages of a bulky newspaper. I can imagine the fond mother of 1960 fetching a sigh as she recalls the sad, bad system which was in vogue in the days of her innocent childhood. She shudders at the memory of the blurred, insanitary broadsheets of an earlier time.

And the cost? . . . I do not suppose that it will exceed the amount of the subscription at present paid for the daily delivery of a penny paper. It would probably “pan out” at something less. The cost of a penny paper totals up to something like five-and-twenty shillings a year. For an annual subscription of a guinea the little implement will probably be placed at the disposal of its customers by the great central exchange . . . So mote it be!

1 A minor character from Dickens, whose work as a cellarman requires him to take his wine in this osmotic way.