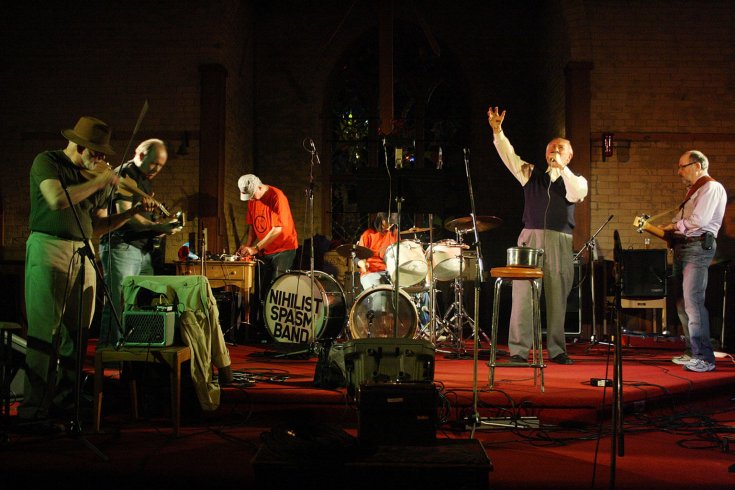 Kitty-corner to the original Labatt brewery, in a tiny artist-run centre at the heart of London, Ontario, the world’s longest-running noise band performs every Monday night. Beyond a hidden doorway in the Forest City Gallery’s back wall, you’ll find amplifiers and a pair of kick drums emblazoned with the Nihilist Spasm Band logo. Meanwhile, from back seats and car trunks come homemade kazoos and violins and guitars—some remarkable for their craft, others for their crudeness.

As the band members sit around, readying their doodads and pulling at beer bottles, vocalist Bill Exley addresses the room. “I was thinking of our band when I went to see a play in Niagara-on-the-Lake last Sunday,” he says. “It was a later play by Ibsen which is very rarely performed—The Lady from the Sea. I was thinking: Would you describe our latest performances as later works? ”

This year, the Nihilist Spasm Band turns fifty, and such milestones tend to inspire introspection. Luminaries such as Thurston Moore of Sonic Youth and the avant-garde saxophonist Joe McPhee have visited London to perform with them; REM once sat in on a session. They’re literally big in Japan, and just last fall they toured Eastern Europe. Not bad for a retired English teacher (Exley), a practising physician (Clement), a former production tech with the local newspaper (Pratten), and a couple of celebrated Canadian artists (Favro and John Boyle)—all pensioners in their seventies who, to this day, can’t read music or play “Salt Peanuts” to save their lives. The core members are often joined by Boyle’s wife, Aya Onishi, from the Kyoto punk band Sekiri. Deceased members Hugh McIntyre and Greg Curnoe (the latter a renowned painter, best known for his works based on Mariposa bicycles), along with Archie Leitch, who quit in 1972, “play less often,” as the band says.

The Nihilist Spasm Band started in 1965, assembled from the characters who hung around Curnoe’s King Street art studio, a locus of political and creative energy. Poking fun at London’s conservatism, as well as the era’s burgeoning hippie culture, the group organized a calendar of prankish endeavours inspired, at least in name, by the nineteenth-century Russian Nihilists—underground revolutionaries who set out to subvert czarist rule. There was the Nihilist Party of Canada, the Nihilist Picnic, the Nihilist Banquet, the Nihilist Lacrosse Team, and a summer cottage they called No Haven. One day, when Curnoe wanted to record a soundtrack for No Movie, a film he’d shot of the group, they tootled on kazoos that were lying around the studio. Afterwards, McIntyre got the idea to modify his instrument, adding a metal funnel to make a horn bell. Almost immediately, the whole crew began hot-rodding their noisemakers, before graduating to strings, drums, and eventually electric instruments. An arms race, Pratten calls it.

The band members knew of John Cage and the Fluxus movement, and some of them were dedicated blues and jazz fans; the second half of their name derives from the New Orleans spasm bands who performed on homemade instruments in the streets. But the kind of free improv the Nihilists did was more naive. If the band has a credo, the lyrics to “I Dreamt I Was Living in Paradise” provide it. “I believe in the purity of the amateur,” Exley booms, “the unschooled genius / A great work of art was never created by a man out of breath.”

By 1966, the band had negotiated a Monday night residency gig at the York Hotel, playing for free drinks as a sort of novelty act. Word spread about the racket, and soon they packed the bar. Buckminster Fuller came to see them when he was lecturing at the university. The owners didn’t care much for the music, Boyle says, but they loved the beer sales. Over the next decade, the Monday night locale moved around: for a spell, they called the Victoria Tavern (known locally as the Bucket of Blood) home, before they moved back to the York for another stint. When the Forest City Gallery opened in 1973, the band was given a permanent space. They’ve convened there ever since. Favro, who turns up religiously every week, says he keeps coming because he still hears something new every time.

The group was central to London Regionalism—a movement, also consisting of local artists, such as Jack Chambers and Tony Urquhart, based on the belief that art made anywhere was important. Stories about their London were as valuable as stories about that other London. Curnoe’s commitment here was crucial—and militant. In protest of the Vietnam War and what he saw as American imperialism diluting Canadian culture, the artist forbade the band to tour the United States. Stipulations such as that led many to view him as the band’s de facto leader, even though he wanted it to be leaderless. “After Greg died,” Pratten says, “we became the Nihilist Spasm Band he always dreamed of.”

If most music is defined by order, then noise music is pure disorder. In the 1913 manifesto The Art of Noises, the Italian futurist Luigi Russolo says that it is characteristic of modernity: “Ancient life was all silence. In the 19th Century, with the invention of machines, Noise was born.” As the genre began to influence others, including punk, jazz, hip hop, and electronica, the Nihilist Spasm Band found itself the subject of critical reappraisal. In his 2013 book, Japanoise, the musicologist David Novak calls them “the godfathers of Noise.”

While the band stayed mostly in London, their first two records—No Record (1968) and Vol. 2 (1978)—travelled the world, inspiring generations of experimenters in Europe and Asia. It’s only since retirement that they’ve been able to peek above ground and survey their influence. They toured Japan twice, for example, at the behest of Alchemy Records’ legendary Jojo Hiroshige, who reissued much of their catalogue. At the turn of the millennium, a series of festivals was organized around the band, with editions in their hometown and New York, attracting artists from all over the world. In September, the band will play a triple-header in London, Toronto, and Guelph, Ontario, to celebrate “fifty years of noise.”

On this Monday night, as they start their second number, Onishi thunders at the tom-toms while Clement hops in and out of the rhythm on his bass. After removing his hearing aids, Favro watches their routine and flutters like a hummingbird high on his telecaster. Pratten bows long strokes on his Pratt-a-various—an electric violin–like instrument of his own creation. Boyle, his back turned to the others, thwacks at a thumb piano using a metal spoon, then twiddles away on a table full of electronic modulators. Exley’s theatrical voice wails overtop. At its best, Pratten says, a Nihilist Spasm Band performance resembles a conversation, the members’ voices represented by their instruments. Sometimes the dialogue is between two players, sometimes three. Sometimes people interrupt or speak all at once. From the industrial din, figures pronounce themselves—a staccato gesture from Pratten, a delicate twinkling section by Favro—like faces spotted in clouds.

Near midnight, as the members pack away their equipment and finish the backwash of their beers, Exley again speaks to the room. “What was that chant the French students used in the general strike? ” he asks. “De Gaulle, au musée? Does it bother anybody else that we’ve spent a lot of time playing in museums lately? ”