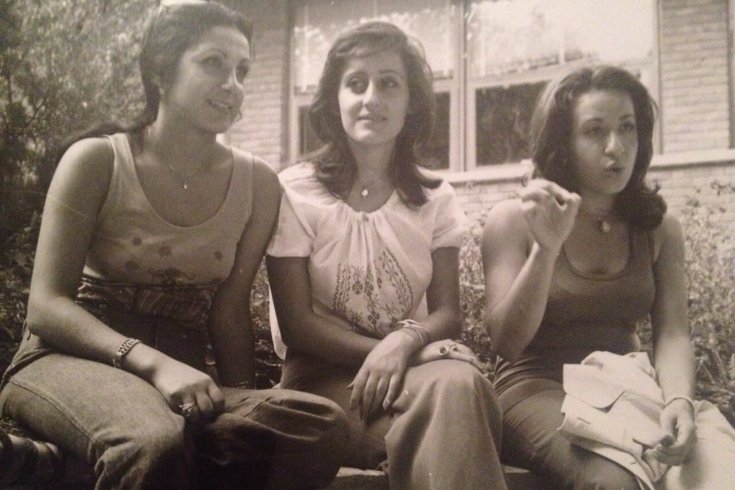 My mother came to Canada as a refugee in January 1983. The last leg of her journey—by plane—was the easy part. Fleeing political and religious persecution in Iran, she and five other Iranians paid the equivalent of $20,000 each to Kurdish smugglers, who led them across the border into Pakistan. They eventually reached the UN Refugee Agency’s offices in Karachi and applied for asylum in the West.

The trip from Zahedan to Karachi took three days. Zahedan, a vital post for drug smuggling on the eastern and lawless edges of Iran, was scorching hot in July 1982 when my mother arrived there. The smugglers dressed her and her travel companions in traditional Kurdish garb—long kaleidoscope-colored skirts and embroidered tops—so they wouldn’t stand out in the modern city attire that they wore in Tehran. The clothes were key to avoiding detection by the revolutionary guard that hunted in these parts for those trying to illegally flee. My mother’s companions included two teenaged brothers and a young couple who took turns distracting their four-year-old son. They told him they were going on a picnic.

To evade exposure, their minibus left Zahedan at midday when it was too hot for the soldiers to patrol the streets. When the road ended, they walked on dusty trails over hills and mountains. The first night, they slept deep in the highlands, where all they had to eat was tea and goat’s milk. When they finally made it across to the next minibus, some of them passed out from exhaustion as they found their seats. The driver made an announcement soon after: “The Iranian border is now behind you. Welcome to Pakistan.”

“I wonder what routes my mother might take if she were a refugee today. Who might be her smugglers, and what countries would open their door?”

Every single person on the bus, including the young boy, was granted asylum in Canada.

The Canadian government today makes a distinction between human smuggling and human trafficking: The former involves willing parties and occurs with consent, while the latter occurs when one party is unwilling and deprived of choice. It’s true, my mother did enter into a business transaction and did give her consent to be smuggled. But if the choice is between prison or death and giving approval to be ferried illegally across a border, how much choice is there really?

At the age of twenty-eight, my mother was faced with two options that many of today’s refugees are confronting. It is a choice between certain death at home, or possible death being smuggled. Today, the tens of thousands of people fleeing civil war and unrest to find new homes in the West are not making a choice. War has stripped them of the privilege to choose their own fate. Abdullah Kurdi—the father of the three-year old Syrian boy Alan Kurdi—was held captive by his circumstance. He and his family were trafficked by a war the world can’t, or won’t, resolve. Why would a parent put their children in such a position? Is it by choice or by consent?

Peace and stability fluctuates and, correlatively, so does the number of refugees. The Canadian response has also fluctuated. A report from the Harvard Immigration and Refugee Clinic from November 2013 highlighted the growing gap between the picture of Canada as a generous sanctuary for refugees and the uncomfortable reality that Canada is consciously and systematically closing its borders to asylum seekers, and consequentially forcing them into the hands of smugglers.

I wonder what routes my mother might take if she were a refugee today. Who might be her smugglers, and what countries would open their door?

My mother’s life in Iran prior to the 1979 Iranian Revolution was not an unhappy one. She belonged to an educated generation of women who greatly benefitted from Iran’s period of modernization under Shah Mohammad Reza Pahlavi. When a regime changes, however, it is often those who lived privileged lives under the previous system that suffer the most under the hands of those who seize power. A year after the Pahlavi dynasty was violently replaced with an Islamic Republic, my mother came to my grandparents’ home and found that the paint on the hood of their mustard yellow Volvo had bubbled up with boils. A hand-written note had been left on the hood of the car: “The acid on your car was meant for your daughter’s face. This time she was lucky.”

Soon after the threat, my mother was forced into hiding. Friends and relatives housed her at their own personal risk. She learned that her first husband, a petty and vindictive man seeking vengeance against her for divorcing him, was now collaborating with the revolutionary guard to find and execute his ex-wife. After months, my mother ran out of places to hide. Late one night walking the streets of Tehran with nowhere left to go, she found herself in the middle of a bridge. On one side was an obscure future in a new land, and on the other side was a fire. She walked away from the flames until she reached the other side.

Years ago, I found my mother’s refugee travel document in a box of family photographs from Iran. The photographs were evidence of a pleasant time, with faces blissfully unaware that soon they would need to leave everything and run. The document told a different story. It was issued by the Canadian government on March 27, 1983, six months after my mother fled Iran. On that day, she was given the hope of a new life in Canada. Exactly four years to the day later, in a hospital in Vancouver, I was born.

“No one ever chooses to leave their home,” my mother told me recently. “The choice is made for you before you even realize its time to go.”

Nadim Roberts (@NadimRoberts) contributes to the Globe and Mail, the CBC, and the Wall Street Journal.