How to Prepare for Doomsday | The Walrus
Skip to content 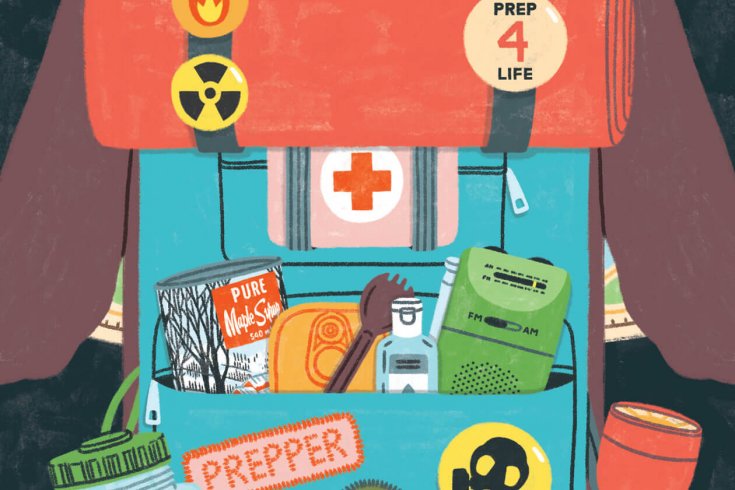 Nearly two years ago, around the time of Donald Trump’s inauguration, go bags became a popular topic of discussion. “Am I the only one feeling compelled to put together a go-bag like we all did in NYC post 9-11?” Elly Lonon, author of the satirical McSweeney’s Internet Tendency’s column turned book “Amongst the Liberal Elite,” posted on Facebook. Many of those who responded agreed with the sentiment.

Go bags, also known as bug-out bags, are usually duffle bags or backpacks filled with essential items one would need to survive for seventy-two hours, meant to be used in case of a sudden evacuation. Their contents typically include a change of clothes, enough food and water for each person in the household for three days, batteries, candles, a solar-powered or crank radio, flashlights, and photocopies of essential documents, among other things.

Until very recently, it would have been rare to find anyone beyond fervent doomsday preppers or conspiracy theorists with any motivation to put one together. But go bags had a brief surge in popularity in the United States after 9/11 and again during Barack Obama’s second term—at the time, the far right anticipated a civil war. Obama, after all, was plunging America into moral and financial ruin, or so some claimed.

During Trump’s first year in office, go bags went mainstream. In the lead up to the election, Cards Against Humanity, the company behind the NSFW fill-in-the-blank party game, created a limited-edition Donald Trump Bug-Out Bag, which included among its contents a gold locket with a photo of Obama and a copy of Plato’s Republic; the 10,000 on offer sold out within seven hours. Goop, Gwyneth Paltrow’s lifestyle brand, included a two-week survival bag (for $12,500) in its 2015 Ridiculous (and Awesome) Gift Guide. And a number of American media outlets, including GQ and the New York Times, have published tongue-in-cheek-but-actually-kind-of-serious how-to articles on surviving the apocalypse, complete with gear suggestions. There are even monthly subscription services that deliver a box of survival tools to your front door, and yes, many deliver worldwide. According to one Reuters report last year, some survivalist gear shops saw sales triple in the weeks following a series of hurricanes and earthquakes and the threat of nuclear war with North Korea.

As a Canadian, I’ve always assumed I am pretty safe. I don’t think I’ve ever believed the extreme scenarios my American Facebook friends worried about would cross the border nor that I was under any threat of a large-scale disaster. While we have occasional climate-related events that require people to evacuate—flooding in Manitoba and Alberta, ice storms in Ontario, Quebec, and the Maritimes—these types of scenarios feel rare. Or, at least, they once did. Then there was the 2016 Fort McMurray wildfire, which required mass evacuations. This past summer, BC experienced the worst wildfire season on record in the province. Climate-change-related extreme weather events, such as heat waves, floods, and droughts, are on the rise, according to the National Research Council of Canada, and Natural Resources Canada predicts more frequent fires in boreal forests, which can be found in nearly every province and territory, in the years to come.

But even if governments step up to address the higher prevalence of extreme weather events, there’s still the matter of individuals. Apocalypse humour and marketing ploys aside, the drive to put together a go bag underlies a sobering reality: ultimately, each one of us is responsible for getting to safety should the need arise.

“There’s a mindset amongst a lot of Canadians to think, ‘Well, maybe it’s going to happen to someone,’” says Paul Kovacs, “‘but not to me and my family.’” Kovacs is the founder and executive director of the Institute for Catastrophic Loss Reduction, an independent, not-for-profit research institute at Western University. The ICLR assesses Canada’s readiness to handle catastrophic events and provides information for homeowners, builders, and small businesses to help them mitigate losses due to disasters.

The ICLR uses six key metrics to measure Canada’s preparedness: how likely someone is to die in a storm, the chance of property or infrastructure damage, how prepared individuals are for an emergency, and the trends over time of each of these scenarios. In terms of the likelihood of someone dying in a storm, and the trend of that likelihood, says Kovacs, Canada is “better than okay”—mostly because earthquakes and hurricanes are rare but also thanks to storm alerts and strict building codes. There is also a low chance of a storm causing infrastructure or property damage, mostly for the same reasons. But the trend in that metric is worsening year over year, as the growing concentration of populations and economic activity in cities have outpaced disaster-mitigation efforts.

The federal government is making some efforts to communicate a sense of urgency to Canadians. For more than twenty years, it has promoted Emergency Preparedness Week in early May with a campaign that now includes a dedicated website with comprehensive information on the types of disasters that could happen, region by region, and what items should go into an emergency kit. It’s even offered premade go bags for sale. But the most recent evaluation of the campaign’s effectiveness—in 2010—shows that barely one-third of respondents were even aware the campaign existed.

“I’ve been living [on the West Coast] for about ten years,” says Michael Barenberg, a former Toronto resident. “From almost the day I got here, people have been talking about how ‘the big one’ is due to hit BC at some point,” he says, alluding to the region’s vulnerability to a giant earthquake. “Now they talk about how it’s overdue. So I figured being prepared with a few days of supplies for myself and my family is a good idea.” Barenberg is one of several West Coasters I know who have go bags tucked away for emergencies. Back when he lived in Toronto, he says, such talk of impending natural disasters “just never really came up.”

Kovacs says ICLR research shows that many prepare for emergencies based on their own lived experiences, including of disasters. People who live in a hurricane zone and have been through a hurricane are more likely to be prepared for the next one. There’s no question Fort McMurray has implemented some of the valuable lessons it learned the hard way in 2016. Among other steps to improve its disaster-response services, for example, the municipality has adopted a bylaw that would create a new full-time position for a director of emergency management. But the majority of Canadian cities haven’t experienced the kind of life-threatening event that would force tens of thousands of people to flee their homes.

In 2014, just over 40 percent of Canadians aged fifteen and older reported that they’ve experienced a major emergency. However, only 29 percent of those Canadians reported that the emergency required evacuation of their homes. Perhaps it’s understandable that most Canadians can’t place themselves in a potential disaster scenario. But it could also be dangerous.

The metrics differ in each country, making comparisons difficult, but according to a 2016 survey by the US Federal Emergency Management Agency, 76 percent of Americans have stocked emergency supplies; a similar survey by Statistics Canada in 2014 showed 47 percent of Canadians possess an emergency kit. Conversely, 74 percent of Canadians say they have confidence in their ability to handle an emergency situation, compared to 68 percent of Americans. That sense of confidence may be more akin to complacency: it’s in the places where we feel safest that we’re least prepared for disaster.

That complacency has led, in my case, to inertia. Ever since my introduction to go bags, the possibility of a sudden evacuation continues to be a source of anxiety for me. Yet I still have not finished putting my go bag together. I’ve scanned important documents, such as my family’s passports and health cards, and I’ve put together some basic camping gear. But I don’t have flashlights, a stash of the medication I take, or any basic nonperishable foods set aside. In fact, last Christmas, my husband gave me a water-filtration straw and knife sharpener to add to the bag, but they’re still wrapped in plastic and lying on a shelf in my living room.

Emergency situations are, by definition, unpredictable and uncontrollable; no knife sharpener could stop a hurricane in its tracks. Perhaps go bags are not only a measure of our readiness for the unknown but also a reminder of our reluctance to face it.

Glynis Ratcliffe has written for Chatelaine and the Washington Post. She is working on a documentary about her grandfather’s experiences during the Second World War.
Katie Carey 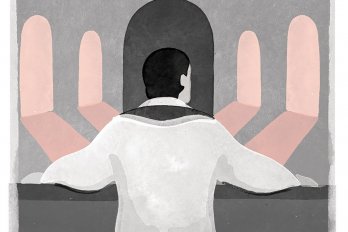 How to Give Solace When There Are No Words