How Margaret Atwood Learned to Type | The Walrus
Skip to content 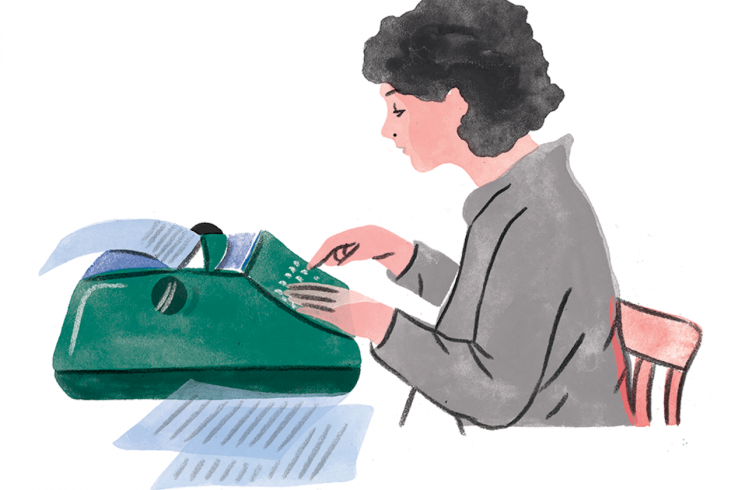 My childhood household had a typewriter. It was a portable Remington from the 1930s with its own black carrying case and round black letter keys with white rims around them. My mother had typed my father’s PhD thesis on it: she’d taught herself to type in order to do so. It was a scientific thesis, so there were umlaut and accent-mark keys, to accommodate citations in other languages.

This typewriter became a fetish object for me soon after I decided—at age sixteen—that I would become a writer. Unfortunately, I had taken a wrong turn earlier in high school, before the writing light bulb had flashed on. I had a choice of Extra Options—for girls: Home Economics, Art, and Secretarial Science—and I’d chosen Home Economics. This was an entirely practical decision: of the five careers proposed for females—nurse, schoolteacher, airline stewardess, secretary, and home economist—the home economists got paid the most. I didn’t want to do any of these, but Garage Mechanic—which had showed up on my aptitude-and-inclination test—did not seem to be on offer. Also, I was afraid of the Secretarial Science class, in which the girls smoked in the washroom, plucked their eyebrows into intimidating arches, and wore their boyfriends’ leather jackets and identification bracelets on their ankles.

So by the age of sixteen, I could set in a zipper and whip up a mean Floating Island, but I could not type.

And there I was, a budding writer. I was buying copies of Writers’ Digest, which told me I needed two typed copies of my stories with my name on every page and a stamped, self-addressed envelope in order to submit my deathless works to each magazine I wished to bombard with my genius.

Crisis! What to do?

I set about learning to type. It was hunt and peck, with intervals of trying to pick up touch typing, via a chart and no peeking at the keys. Those intervals never lasted long: I got blisters, and also there were—already!—too many things I needed to type. The little white vial with the little Wite-Out brush became my friend. My typescripts were messy but legible. It was in this way that I sent out all my early manuscripts, with my name at the top—“M. E. Atwood,” because I didn’t want anyone to know I was a girl—and, endearingly, “First Serial Rights Only.” As if.

Over the years—and once I really was publishing things—I graduated: first to my own manual portable, a somewhat flimsy affair, and then, in 1967—glory be!—to an electric portable. Then the pinnacle: a Selectric with backspace correcting and different typefaces available in a bouncing ball that you could pop on and off.

That was my favourite, although it was too heavy to be carried onto a plane. I became a renter of typewriters in foreign countries, which is why I began typing The Handmaid’s Tale on a huge German-keyboard rental in West Berlin in 1984.

But all that noisy, inaccurate typewriting was soon to end. Along came the personal computer, and for a few years after 1989, I spent hours with a hairpin trying to pry stuck floppy disks out of my first Mac. My manual typewriters were stored in closets, with the fond regret bestowed on old prom photos and shells plucked from forgotten beaches.

Now, however, all things analogue are coming back. Rumour has it that the Kremlin has returned to typewriters: a typed page can’t be leaked on the internet, or not as easily. I’ve been eyeing my old electric typewriters. Can they possibly still work? Shall I try?

Just the other day, I received a typed letter in the mail. The typer was quite proud of himself, as if he’d just climbed Kilimanjaro. Will typewriters make the sort of comeback now being experienced by vinyl records and Polaroid cameras? Who can tell?

Margaret Atwood (@MargaretAtwood) is the author of more than forty books of fiction, poetry, and critical essays. She won the 2016 PEN Pinter Prize for her writing and political activism.
Tallulah Fontaine