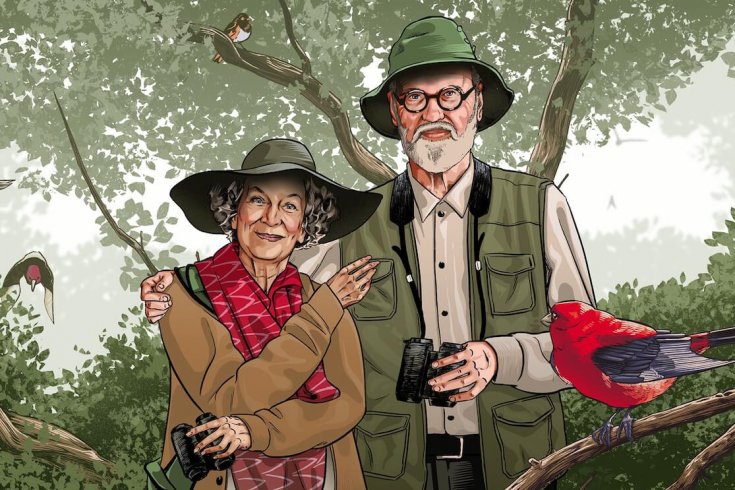 Step outside. Behind the cars and construction, the lawnmowers and dogs, you’ll likely hear the chirps, coos, warbles, whistles, peeps, cries, and trills of birdsong. It’s music so common that we often register it only in its extremes: the concrete silence of empty industrial parks, the green symphony of northern woodlands. Mostly, birds are just there, peeking, tweeting, then darting off. But to a surprisingly large group of North Americans—almost forty-eight million, by one count—they’ve become objects of particular affection. Among the most famous of this tribe are Margaret Atwood and Graeme Gibson, a mated pair of authors.

In May, at the height of spring migration, I met the couple, whose shared love of birdwatching and conservation spans the better part of their forty-six-year partnership, at a café on Ontario’s Pelee Island—the southernmost populated point in Canada, situated in the western basin of Lake Erie. The seventy-seven-year-old Atwood, face shaded under a wide-brimmed hat, shared a sandwich with Gibson, who wore a fiddler’s cap and brown cardigan. They were on the island for the sixteenth annual Springsong Weekend—a fundraiser partly founded by Atwood and Gibson in 2002 to support the heritage centre on Pelee (rhymes with peewee)—and to birdwatch with the friends they host there for visits each spring.

Over a lunch made noisy by birds and local human residents that winged through the café’s outdoor patio, the two spoke of how they’d been introduced to the hobby. Atwood, who grew up on a lake, came to an awareness of wildlife early. For Gibson, it was more of a sudden hazing: one day in the 1960s, while on a walk, he was buzzed by a red-tailed hawk. “Suddenly, this bloody big bird went right over my head,” he told me, “and I thought, what the hell was that?” So he bought binoculars and a Peterson Field Guide to Birds of North America, found the creature again, and soon became enamored of his discovery.

“The hawk was Graeme’s ‘trigger bird,’” Atwood said, using a term for whichever species first brings a future birder to the pastime.

Gibson, who retired from novel writing in 1996, has a less visible public profile than Atwood, but his passion for nature is as notable. After the hawk incident, with what he calls “the zeal of a convert,” he became interested in texts that illustrate humanity’s ancient relationship with avian life. The result was his 2005 miscellany, The Bedside Book of Birds—a wonder cabinet of a book. Over 370 pages, Gibson offers excerpts from medieval bestiaries (on parrots, cranes, and the mythical caladrius), travelogues by Bruce Chatwin (on albatross), Cuban folk tales (roosters), fiction by Franz Kafka (on vultures—obviously). There are poems by Edna St. Vincent Millay, Okumura Masanobu, and Margaret Atwood herself (swans, cuckoos, and vultures again), and numerous other works—including etchings, sculptures, illuminations, paintings, and sketches of birds from nearly every period and culture. In his introduction to one of the closing chapters, Gibson writes that birdwatching “can encourage a state of being close to rapture—the forgetfulness that blends the individual consciousness with something other than itself.”

In 2003, Atwood and Gibson helped found the Pelee Island Bird Observatory. The non-profit serves as a node within the Canadian Migration Monitoring Network, a chain of observation stations that gather data on passing avifauna. “PIBO’s chief mission,” said Atwood, “is counting birds. Hence our slogan: We count birds because birds count.” Without accurate numbers, she said, it’s impossible to know what’s happening across the distances many species travel—and such information can offer scientists insight into ecological and environmental changes. Gibson noted that the island lies at the confluence of the Atlantic and Mississippi migration routes. As many as half of Canada’s more than 400 recognized bird species can be seen there each spring. Just north on the mainland, at Point Pelee National Park, thousands of humans travel from around the world to witness red-necked grebes, yellow-breasted chats, and prothonotary warblers, among others, “drop down” to rest before resuming their journeys.

Interest in birdwatching has grown since the couple took it up; it’s among the few vintage hobbies whose adherents are gaining in number. Among them, in the parlance of the pastime, are “listers,” who travel far afield to add species to their so-called life lists; “patchworkers,” who focus on birds of a specific region; and ornithologists. The rise in popularity might be due to the growing number of retiring baby boomers—but a surprisingly wide swath of society is in on the trend. Whether because of the hobby’s low buy-in cost, its touted ability to develop mindfulness, or its potential to act as a palliative for a generation numbed by high-density downtown living, reports of binocular toting twenty-somethings are up. This October, Canada’s Greystone Books will publish Bernd Brunner’s Birdmania: A Remarkable Passion for Birds. The work offers an overview of humanity’s relationship with birds, but gives emphasis to the conservationists, con artists, and eccentrics who made birds the focus of their lives—a sort of bedside book of birders.

Earlier this summer, Atwood launched the third graphic novel in her Angel Catbird series, a zany, colourful work of benevolent propaganda she created in collaboration with illustrator Johnnie Christmas. Its messages: (1) birds are important for our environment, but (2) they die in alarming numbers, and (3) many of those deaths are caused by domestic house cats, so (4) please keep your cats indoors. Other famous literary couples have shared pastimes—Vladimir Nabokov collected butterflies to the delight of his wife, Vera; Sylvia Plath took up beekeeping with Ted Hughes—but few have been as well-paired for the activism that often attends birdwatching: Atwood’s interest, which seems cooler and slightly ironic, tempers Gibson’s gregarious fanaticism. Rather than rail against cat owners, as some do, they have adopted a balanced collaborative angle: driven yet compassionate, cut with humour, grounded in science, effected through appeals to emotion and intellect.

As the conversation turned to other local initiatives the couple supports—including one of the island’s first certified organic farms and the Pelee Island Book House, a newly opened writers’ retreat—the question of seclusion arose. Given the solitary demands of her vocation, few would have begrudged Atwood a complete withdrawal from the island’s community. Instead, she chose involvement.

“Well, they’ve been good to us,” Gibson said, “the people here.”

Like remote communities across the country, Pelee has a reputation for protecting its own. The islanders encourage birdwatching, but not celebrity sighting. Stories abound of tourists being comically misdirected: ask for Atwood, and you might end up on the far side of the island at Dick’s Marina—long abandoned, now a midden of planks and broken slips.

While we finished our coffees, our talk turned to the friends who visit. Birds still come, but the “old gang” that gathers to greet them is thinning. Shaughnessy Cohen, one of their first hosts on Pelee, collapsed of a cerebral hemorrhage during a live session of Parliament in 1998. Two others died recently, including historian Ramsay Cook. Gibson is eighty-four. Weeks before I met him, he decided to skip major knee surgery. “I have dementia,” he said, confirming what The New Yorker reported in a long profile of Atwood this past spring, “and so I thought I’d focus on that.” It’s not so bad, really. Early in the day, he can look at birds, he told me, touching his knee. “Then, after two beers, I can walk home.”

Just as Key West was for Ernest Hemingway, the island is a refuge of sorts for Atwood—an escape from a world that has never wanted her more than it does now. A media-savvy elder, her opinions on world politics, the environment, and social issues are germane and quotable. Her work, too, is reaching a greater audience, especially among a younger generation. Atwood’s tweeting—often humorous, occasionally expressing fears of rising authoritarianism—has attracted more than 1.5 million followers. Hulu’s adaptation of The Handmaid’s Tale was recently renewed for a second season; the CBC will be airing a miniseries based on her 1996 novel, Alias Grace, starting September 25. Even amid the static of pop culture and news cycles, it’s become nearly impossible to ignore her voice.

Would an outsider have known this based on the attention of the locals who stopped by the café for butter tarts and coffee? Likely not; all passed without pausing. A few long glances, maybe. But no one bothered the couple. She gathered their napkins and plates.

A moment after the server left, Atwood peered over my shoulder. “We see you,” she said in a sing-song voice. “We know what you want.” Gibson followed her gaze and raised his brows in surprise. I expected a tourist. But it was only a common grackle, Quiscalus quiscula, black and iridescent blue. It turned its head quite curiously, as those bright birds will, and flew away.

Grant Munroe has written for the Globe and Mail and Literary Hub.