How I Remember My Brothers | The Walrus
Skip to content 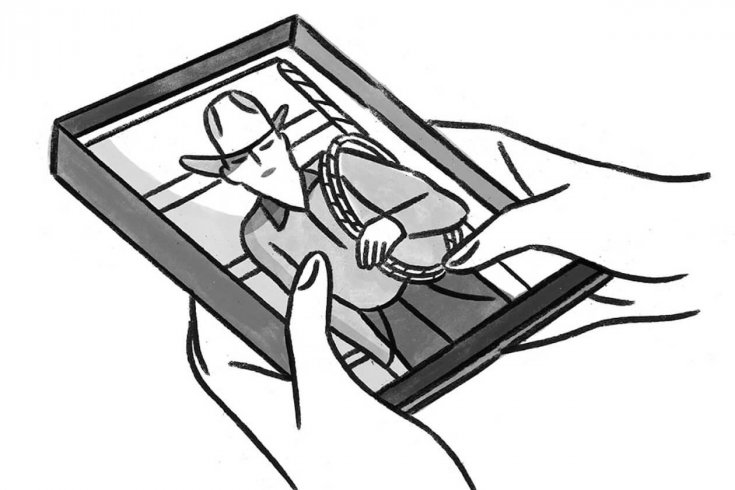 When i was about six or seven, I lived in my father’s house on the rez. My room was walled with that cheap faux wood lining that calendars, pictures, or postcards find it a challenge to stick to. The effect—unintended, as I cannot believe that Indian Affairs would be so prescient as to achieve this on purpose—evoked a feeling of impermanent residence, hollow and fragile.

Still, some things did find their way onto our walls. One should not discount “Injun-nuity,” huh? My father’s headgear—some wool hats for winter walks and well-worn ball caps for summer sun—was laid out with pride by the kitchen entrance, an unsettling large photo of the A&W bear was in the hallway, and we had a tapestry hanging depicting a group of black bears in the woods.

Among these treasures was a portrait of John and Robert Kennedy that hung in my room. I used to look at them in profile and wonder how they could be so noble. One night, when my mom came in to kiss me good night, I asked her who they were. She turned, looked at the portrait, and then looked back to me. Between that moment and the next, my childhood was held with precious care; she could have been a surgeon, or an artist on some trapeze. She smiled and, speaking softly, as she always did in these tender moments, told me that they were brothers, that John had been the president of the United States of America, and that they had both died. She seemed to miss them and to lament their passing. That picture framed my first impression of reverence for the dead.

Farther down the hallway, across from my father’s bedroom, where his rifles and Canucks calendar hung, was a dark and cool room. I knew it as Johnny’s room. Johnny was my brother. My father kept the door closed and would not talk about it.

Once, I stole inside. There was no light in the room, save for what crept in through cracks in the blinds. The air was stale. I was surprised to see that there was no bed. I wondered where Johnny would sleep. I did find a wooden horse of the kind used for sawing wood. On top of the sawhorse was a leather saddle topped with a wondrous horn of gold. The leather creaked and chafed my skin as I ran my hand across the saddle. I wanted so badly to get up on it, but the saddle was too big. I must have walked around it half a dozen times just trying to see it all at once.

I was not allowed in the room again until after my father died.

Later, I found out that Johnny had won the saddle. He was a champion of the Indian Rodeo Cowboy Association. I also found out he had died years earlier, before my other brother Kenny disappeared. It all made sense. I had lost two brothers who I had never known—and their portrait was in my room. I came to look upon John and Robert Kennedy as my brothers. I was impressed that they were so good-looking. I was impressed that my brother was president of the United States of America. I was inspired.

Soon, I came to realize that my brothers were not John and Robert Kennedy. They were Johnny and Kenny Sebastian. Johnny was not the president of the United States of America. He was a twenty-four-year-old rodeo champion who was killed by a drunk driver. Kenny was not the former US attorney general killed in a hotel kitchen. He was a twenty-one-year-old boy who knew he would never make it to twenty-two. It was 1975, and young Ktunaxa men and women in our community were dying around him. After Kenny was sent for electroshock therapy, his clothes were found neatly folded by the roadside, near the river, his body eternally elusive.

In all of those lives of unfulfilled promise and tragedy, including that of my father, who died when I was eight, and that of yet another brother we lost, somehow, twelve years later, I find a tranquility. The depth of such loss guards me from truly feeling all that is and all that is not in each death I have come to endure. Perseverance leads me to yearn for those days when I could look to that bedroom wall and see that portrait and see not who had been lost but who was remembered. To look at that saddle and not lament a champion’s prize but see that horn and dream that one day I, too, could ride.

Troy Sebastian / Nupqu ʔa·kǂ am̓ is a Ktunaxa writer living in Lekwungen territory. His writing has appeared in The Malahat Review, The New Quarterly, and Quill & Quire.
Tallulah Fontaine