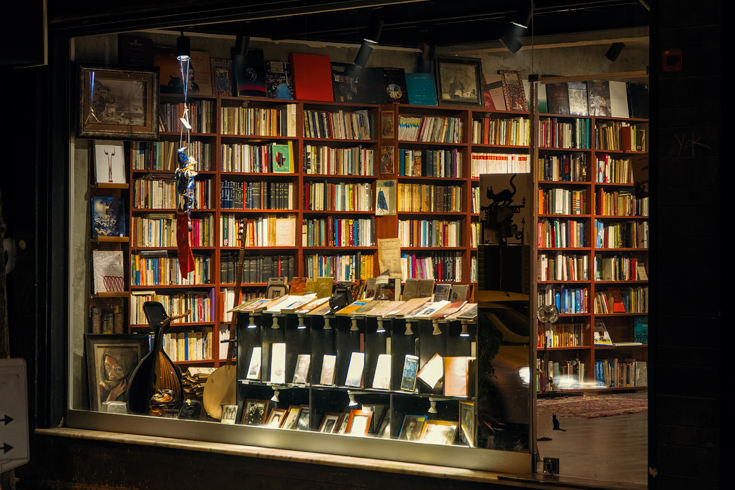 This February, Coteau Books, one of the most respected literary presses on the Prairies, closed down after forty-five years in business. In April, Librairie Olivieri, the elegant Montreal bookstore famed for its cultural events, also announced it was closing. The first of these events was seen as a regional story, the second as evidence of how the pandemic had deprived bookstores and publishers of the walk-through traffic that provides much of their income. Yet the two closures, separated by almost 3,000 kilometres, were both signs that the infrastructure for publishing and distributing Canadian books may be crumbling.

Any doubts about the gravity of the situation were erased on May 19, when the Indigo bookstore chain, in response to deep financial losses, announced the closure of seventeen of its more than 200 stores across Canada. Nearly a month later, it announced three more closures. The immediate threat to Canadian publishers is minimal. Of those twenty stores, sixteen are Coles outlets, which are located in malls and carry relatively few Canadian titles. But the central issue is what happens next. Even before COVID-19 began to stifle revenue streams, Canadian publishing was in crisis. Indigo has dominated bookselling in Canada for two decades—a 2017 Atlantic Canada survey found that the company accounted for 81 percent of all offline book sales in the Atlantic region. But Indigo has, in turn, been dominated by Amazon. And, though founder Heather Reisman depicts her stores as providing a valiant “balance” to the entry of Jeff Bezos’s company into Canada, Indigo’s inability to prevent the rise of an even more ruthless corporation is a reminder that those globalization elevates it eventually devours: Indigo’s total revenue for 2019 fell almost 9 percent.

Because books weren’t enough to keep afloat her high-rent, large-format stores, Reisman has for years been increasing the proportion of merch available to customers. It’s no surprise that, during Indigo’s desperate attempts to return to profitability, Canadian publishers saw returns increase. (Book retailers can, for full credit, ship back unsold copies of what they’ve ordered, effectively paying only for what they sell.) It’s also no surprise that Indigo’s restructuring coincided with the period when, between 2005 and 2017, the share of Canadian-authored books purchased in Canadian bookstores dropped from 27 to 13 percent.

The closure of twenty stores, while not disastrous in itself, nonetheless raises serious questions about the future of big-box bookselling in Canada and the impact of its demise on Canadian authors and their publishers. If Indigo folds, could Canadian publishing fold with it?

Bookselling is a business like no other. An independent bookstore may stock between 10,000 and 35,000 titles; a larger outlet of a chain store may stock 50,000. The availability of these titles to the public is the foundation of a national culture, which stimulates educational and creative activity. Yet many of these books either never sell or sell at a glacial pace. Bookstores survive on thin profit margins generated by the mix of new, recent, and older titles. The bulk of Canada’s mid-list authors (basically anyone not called Margaret Atwood or Michael Ondaatje) subsist in an uneasy space between the bestsellers at the front and the never-sellers at the back. Selling a few hundred copies (if published by a domestic publisher) or 2,000-plus (if published by the Canadian branch of a multinational), these writers attest to the existence and evolution of a Canadian literary culture. Even though their sales make only a marginal contribution to keeping bookstores in business, they are the reason publishing is deemed deserving of government support.

Until the mid-1990s, most Canadian bookstores were small. A twenty-minute walk along Toronto’s Yonge Street, Montreal’s Sherbrooke Street, or Vancouver’s West Broadway could take you past half a dozen bookstores, each with its own quirky selection. Two large down-market chains, Coles and SmithBooks, operated in malls and busy shopping districts. The chains also ran small shops, stocking few Canadian titles—invariably on a shelf labelled “Canadiana.” When the 1994 North American Free Trade Agreement eliminated tariffs between Canada, the United States, and Mexico, it created more opportunities for foreign investment and trade. This brought megachains such as Walmart, with their big-box stores, to Canada. The thinking was that, in the expanded, “borderless” North American market of over 480 million shoppers, big stores would offer more merchandise and thus bring in more money.

It was Chapters founder Larry Stevenson who introduced the big-box model to Canada’s book market. Established in 1995, Chapters had large appetites, and it eventually acquired and merged the Coles and SmithBooks chains. Critics wasted no time accusing the new giant of chasing off venerable independent stores, often by opening down the street and then deeply discounting bestsellers until it drove the competition out of business. Food for Thought, a beloved bookshop in Ottawa’s Byward Market, folded a year after Chapters opened a few blocks away.

Then came Heather Reisman and her more upmarket Indigo chain. Offering “Books, Music and More,” Reisman opened her first store in Burlington, Ontario, in 1997. In 2001, Indigo, which by then owned fifteen superstores, staged a hostile takeover of Chapters, which owned seventy-seven superstores and over 200 smaller mall stores. As Reisman has grown to preside over Canadian bookselling, she has promoted herself as a supporter of the value of reading and of Canadian writers. She has plastered some Indigo stores with the logo “The World Needs More Canada,” accompanied by moody black-and-white photographs of iconic Canadian writers and singers. Bookstore browsing has increasingly taken place beneath fluorescent lights, on huge display floors, at superstores in suburban malls. Front-of-store bestsellers have been intermingled with more lucrative items: lamps, candles, cushions, vases.

The independents couldn’t compete. And, as skyrocketing urban real estate prices pushed up commercial rents, they began to disappear. Today, however, it’s Reisman’s chain stores that are foundering. And, if Indigo keeps cutting Canadian titles as a way of stemming its financial losses, it will not only reduce the access of Canadian writers to readers across the country but will risk unravelling a publishing industry that has taken half a century to build.

Canadians weren’t always able to read Canadian books. The Great Depression curtailed homegrown publishing, and after the Second World War, American corporations spread into Canada, taking over everything. (This is partly why Canadian novelists from the 1930s to the 1950s—such as Sinclair Ross and Hugh MacLennan—published in the US.) A 1955 conference at Queen’s University, in Kingston, brought together publishers, writers, and academics to address this problem. It became one of the catalysts for the nationalist policies of the 1960s and 1970s. These policies, which included an extensive subsidy system to support independent publishers, created the phenomenon we now call Canadian literature.

According to a 2018 study, titled “More Canada,” by a group of Canadian publishers, the countrywide dissemination of Canadian literature peaked in the early 1990s. By the 2000s, the picture started to darken. The economic pressures of a rapidly changing industry not only capsized one of the largest domestic publishers, General Publishing, but led to Random House buying “Canada’s Book Publisher” McClelland & Stewart, then escalated to even bigger multinational mergers, most centrally Penguin Random House in 2013. Box stores, digitalization, and the disappearance of book sections (and sometimes of the very newspapers that housed them) followed. The diminished awareness of and access to Canadian writing has deepened over the last decade. Total sales of Canadian-authored trade books in Canada fell from 3.7 million copies in 2009 to 1.8 million copies in 2017.

The drop in sales and the marginalization of Canadian books have been most acute at the Indigo chain. If the company goes under, its demise will send shudders all the way down the book-production line. In March, Indigo reportedly gave notice that it would be suspending payment to Canadian distributors for sixty days. Many unsold books were returned to publishers before their agreed-upon return dates. “We are in the process of potentially refusing returns which are huge and could mean pulping,” one publisher said, referring to the process of destroying books that are considered to be out of print or no longer saleable. Another publisher expressed concern at a shift in Indigo’s purchasing patterns: “They’ve cancelled previous orders, many of which were already relatively meagre, and they are replacing them, when they do at all, with even more meagre ones.” A third independent publisher reported the return of $6,000 of books in one week.

The COVID-19 lockdown, which has caused overall unit sales to drop by 27 percent, places Canadian publishers under huge financial pressure. Indigo’s continued delays in payment could push them to the brink. At the moment, their revenue is largely dependent on shuttered independent bookstores, which are limping by on online orders, Indigo-style diversification into gift sales, and home delivery. Indigo, by contrast, can’t afford to limp by; its shareholders demand a profit. Industry insiders say that there is a serious possibility that COVID-19 could mark the beginning of the end for the Indigo chain. Such a collapse would be disastrous: more independent publishers might go the way of Coteau Books.

Before the world can need more Canada, Canadians will need more secure access to our own literary conversation. It’s difficult to imagine this happening without a beefed-up nationwide network of independent bookstores. Independents are more likely than chain stores to hand sell an ambitious literary novel, a first collection of short stories, or a book by an Indigenous author. They are the key, in other words, to maintaining the existence of a national literature that not only entertains and instructs but cultivates the judicious awareness of community, history, and linguistic nuances that help sustain an advanced democracy.

In the United States, the disappearance of the once omnipresent Borders chain, which closed in 2011, led to a renaissance in independent bookselling and small-press publishing. Independent bookstores in the US grew by 35 percent between 2009 and 2015, and they have continued to flourish. Whether a similar renewal could happen in Canada is an open question. Our publishers are smaller and more vulnerable, our market more dispersed. Globalization has eroded the nationalist impulses that, in the 1970s, made Canadians agitate for more homegrown books. Canada is short on the prosperous college towns that nourish many US independents and long on suburban malls, which are uncongenial to the independent bookstore sensibility. The kinds of policies needed to stimulate the growth of independents and maintain smaller publishers in the twenty-first century will be different from those of the 1970s. In Paris, for example, independent bookstores receive rent subsidies that make it possible for them to stay in business in high-rent downtown areas.

Our ability to implement policies capable of solving our book-distribution problem will decide whether our literary conversation continues into the future or Canadian literature turns out to have been a flash of creativity that flared for a few decades, then vanished.

Stephen Henighan’s sixth novel, The World of After, will be published in 2021.

Have We Been Thinking about Inflation All Wrong?