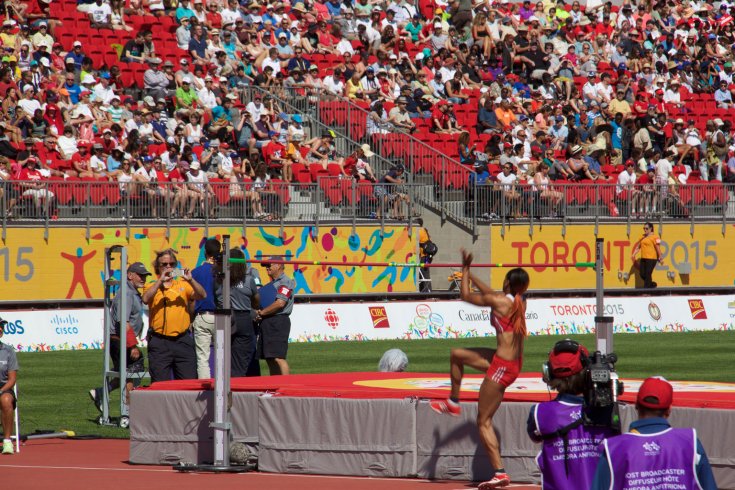 Adam Ledlow and his wife went to Disney World on their honeymoon. “I got bumped to the front of every line,” he tells me. “Sorry, kids.” Ledlow was twenty-six, but he’d been gradually losing his hearing since he was nineteen, and even face-to-face conversations were getting hard for him to understand. His wife approached a help desk to ask if the theme park had anything that could help him. She came back with a handheld GPS-enabled captioning device that pinpointed Ledlow’s location on every ride in the amusement park, even down to which ghoul in the haunted mansion was screaming, and provided Ledlow with a scrolling screen of up-to-the-second transcription. “I probably ‘heard’ the events better than my wife did,” he says. That was the best experience with assistive technology he has ever had, and it was back in October 2007.

Ledlow, a friend of a friend, and I went to watch a track-and-field event on the final weekend of the Pan Am Games in Toronto to test out the assistive listening devices on offer. The games have been hosted in different cities every four years since 1951, and the Ontario government has touted Toronto’s as the most accessible ever. (The Parapan Am Games start tomorrow.) Specialized buses were available for wheelchair or walker users to pre-book and there were accessible parking spots, washrooms, gates, and seats. For those with vision or hearing needs, Pan Am was trying out a new solution for large Canadian venues.

John Dundas is the manager of Pan Am and Parapan Am’s spectrum services—all the radio frequencies and wire communications—from announcers to security to the little cars that beetle up the field to collect javelins after they’ve been thrown. He brought the assistive listening technology with him from his native Glasgow, where he was in charge of all wire comms at last year’s Commonwealth Games. While he had never worked on assistive technology before, an early meeting with the Glasgow planning committee had left Dundas scratching his head. “I was quite gobsmacked,” he tells me, when he found out that people with hearing or vision impairment would have to sit in a special section. The Commonwealth Games were planning to provide these spectators with listening devices that would receive transmissions on a license-exempt radio frequency, and the transmission wouldn’t be strong enough to reach more than about 100 seats in a 44,000-seat venue. “If you buy a ticket for a row,” Dundas said to me, “you shouldn’t be told, ‘Sit here to get a signal.’”

The solution that Dundas implemented, both in Glasgow and Toronto, was a technology called mass casting. Since the performers at Pan Am’s opening and closing ceremonies wore earbuds that connected them wirelessly to their production team, the broadcasts for hearing- and vision-impaired spectators could be piggybacked onto this set-up—a cheap option since it meant using existing equipment. At a meeting with Canadian government officials, Dundas tells me, “I said to them, ‘I’d like to do this mad idea of broadcasting the sports presentations at every venue. Can I please have some radio frequencies? ’” This meant finding the gaps on the FM dial between radio stations, a task that Industry Canada agreed to take on. Instead of the weak license-exempt transmission that would only cover a special section, Dundas’s model blanketed every seat in a stadium with a licensed FM frequency.

Ledlow and I arrived at the York University stadium in the early evening and took our seats in the stands. We were right in front of the women’s long jump, and we watched the athletes pelt down the field and bicycle through the air before crash-landing on the sand. Spectators around us stood and shouted when the relay teams sprinted by, and we watched Derek Drouin, third highest jumper in the world, spring 2.37 metres to a gold medal.

I asked Ledlow how the assistive device was working for him so far. “Experience so far—uhhhhhhhhh . . . ” He laughed, then said, “You can put like nine h’s in that ‘uh.’” The problem wasn’t the FM frequency, which was working beautifully—I could tell when I held the earpiece to my ear. The problem was the type of earpiece that Dundas’s team had chosen. Ledlow has had a cochlear implant since 2012; sound bypasses his ear altogether, and is sent by electrical impulses from a magnetic disc on his head straight to his auditory nerve. The handheld receivers we’d been given at Pan Am’s information booth were equipped with earbuds. To hear anything, he would have had to come prepared with his own specialized headphones that plug into the cochlear implant.

Most people with hearing aids, Ledlow told me, would have the same problem, as many of those devices sit inside the ear canal, leaving no room for the earbud. Even removing hearing aids to make room wouldn’t work well, as most don’t simply amplify sound the way an earbud does, but digitally equalize it to reflect a person’s individual hearing loss. When he got my email about Pan Am having listening devices available, Ledlow said, “I was picturing the Canada 3000 headphones that you get on an airplane—the old foam things? I was picturing a hunk o’ junk like that for some reason.” He acknowledges that it’s partly his own fault—he could have made more of an effort to check the website (it does say the device has earbuds) and come prepared to adapt the device to his own needs. However, he pointed out, if he were completely deaf and reliant on captioning or sign-language interpretation, the games didn’t seem to have anything on offer.

Creating assistive technology to work for everyone is a challenge, especially in North America. “Europe’s quite far ahead on accessible aids,” says Dundas. In the UK, the widespread presence of telecoils in hearing aids means that large spaces can be wired for sound without any need for a separate device. Induction loops—wire loops that transmit a magnetic signal—encircle the venue, and users can simply press a button on their hearing aid to tune their telecoils to the signal’s frequency. The result is that fuzzy intercoms, muffled ticket-takers, or distant lecturers can be tuned in as if the voice is right into the user’s ear. Wimbledon, St. Paul’s Cathedral, and the Roald Dahl Museum all use induction loop technology for the convenience of their visitors, while its use in Canada is limited to some churches, lecture halls, and meeting centres.

It is unlikely that this country will host the Pan Am Games again for another fifteen or twenty years; by then, hearing technology may have outgrown any hunks o’ junk at all.