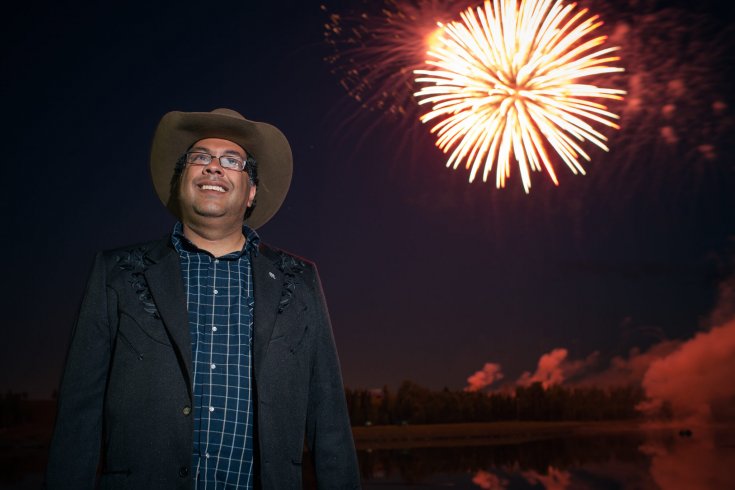 Late Monday night, after winning his third term as mayor of Calgary, a tired Naheed Nenshi delivered his trademark speech at a popular downtown beer hall. “For thousands of years, people have been coming to this place—this place the Blackfoot call mohkinstsis, the place where two rivers meet. They’ve been coming here to hunt and fish and trade, to live, to love…” His supporters screamed and cheered at the familiar words. Nenshi’s speech is always about the same things: how in Calgary it doesn’t matter who you worship or who you love, how in this community we’re all connected and every person has dignity. It’s a message that resonates deeply in a young city where the median age is thirty-six.

Over the past year, against the backdrop of escalating white supremacy and violence in the US, Nenshi’s familiar words often felt like a bulwark of sorts. The world might be coming apart, but here, on the city level at least, things were okay. Here, we still look out for each other. At the same time, the various iterations of The Speech sidestepped the city’s unspoken social, economic, and racial rifts—many of which were finally exposed during an unusually nasty election campaign over the past month. Racial and gendered slurs against Nenshi and other incumbents were commonplace online, and misinformation was everywhere. For journalists covering the campaign, it all started to feel far too American: Where do you even start with setting the facts straight?

In the end, the electorate wasn’t swayed. Calgarians again went progressive, choosing Nenshi over Bill Smith, a conservative who campaigned on change and not much else. (The third-place candidate was Andre Chabot, a centrist councillor whose campaign never really got off the ground.) A lawyer and former president of the provincial Progressive Conservative party, Smith was heavily favoured by the city’s right-wing establishment. Calgary conservatives are still recovering from their loss of power in Ottawa, to Trudeau’s Liberals, and in Edmonton, to Rachel Notley’s NDP. Smith was their man, the hope of old Calgary. He was going to rein in taxes. He was going to get a deal done with the Calgary Flames for a new arena, unlike Nenshi, who’s been driving a hard bargain with the team’s billionaire owners.

Unfortunately for Smith and his backers, it seemed he’d given no thought to what a city is or what it could be. He put forward no detailed policy. He frowned on Calgary’s downtown cycle lanes, even as the city’s economic-development agency prepared a bid for Amazon’s second headquarters, touting that same infrastructure as a selling point. He said he’d rethink a new LRT line approved by city council in June, but he failed to clearly articulate why or what he’d do instead.

Ultimately, Nenshi stood alone as a city builder. He won, albeit more narrowly than in his previous victories, with 51 percent of the vote. It was an election that saw the highest voter turnout in four decades.

But while progressives are celebrating the end of an ugly campaign, not all wounds have healed. The race took an unsettling turn when, in the final days, Nenshi was pilloried in local media for calling out racists who were attacking him online. “There are forces out there in the community that are supporting my opponents that really want us to go backwards,” Nenshi said in a Facebook video that sparked outrage. “That don’t want a city that is so inclusive of everyone.” Elsewhere, Nenshi warned against becoming a colder, meaner city, and he said that racism needed to be named and shamed. This was somehow a no-no. You can talk about race in Calgary but only, it seems, if it’s in comforting, reassuring terms.

White people in Calgary, as elsewhere in Canada, tend to think we’re colour-blind. After Nenshi was first elected in 2010, the national media made a big deal of him being Canada’s first Muslim mayor. Calgarians themselves barely recognized what they’d done. They’d been drawn to the policy nerd because he seemed to understand city hall better than anyone else; they weren’t trying to make a statement.

And yet, the 2017 campaign showed us that our colour-blindness is an illusion. After Nenshi called out the online trolls—and criticized Smith for failing to strongly denounce them—Calgary’s conservative establishment became defensive and accused Nenshi of playing the so-called “race card.” A sampling of headlines from Postmedia’s (overwhelmingly white) newsroom in Calgary: “Bill Smith accuses Nenshi of playing the race card in a bid to stir up support,” “Nenshi should ignore online haters and not play the race card,” “Nenshi’s desperate Hail Mary pass on race and religion.”

Context is important here. In 2015, Nenshi was the target of thirty-six threats that were serious enough to involve police, according to city data published by Metro News. In 2016, the number jumped to sixty-five. In public, as they happened, Nenshi didn’t draw much attention to these threats, even when they nearly doubled. He kept on with The Speech, portraying Calgary as a place of welcome. But, later, in the heat of the election campaign, when he dared to bring up Calgary’s simmering racism, he found a city in denial.

Like Barack Obama addressing Americans, Nenshi gave a portrayal of Calgary that was, perhaps, overly charitable. Bizarrely, in calling out racism, Nenshi faced more outrage than Ward Sutherland, an incumbent councillor who, in the last days of the campaign, made a quip about “Johnny Jew from New York” while commenting on public art at an election debate. Sutherland was re-elected on Monday; he claimed in the days after the debate that he had said “Johnny Choo,” perhaps meaning “Jimmy Choo,” in reference to a London-based shoe designer he’d learned about from Sex and the City. (The video is online, and Sutherland’s alliteration is crystal clear.) For all our progress, Calgary remains a place where you can let slip an anti-Semitic slur and still get re-elected.

Nenshi’s challenge now will be building consensus on Calgary’s fifteen-member city council, which now has four new faces. (All eleven incumbents were re-elected.) Nenshi has struggled to build council relationships in the past, leading to frustrating logjams on issues such as the city-wide legalization of secondary suites, commonly referred to as basement suites, or in-law suites. Having won with a narrower victory than his past two elections, Nenshi has some reflecting to do, but then, so do Calgarians. Our defensiveness on the subject of race did not look good on us. We have to stop edging away from that conversation.

By Nenshi’s telling, the story of this election was that Calgarians rejected partisan politics on the municipal level. That’s part of it. But we are left now with some uncomfortable truths about our city. In 2010, we congratulated ourselves for being more progressive than we thought we were. In 2017, as we look in the mirror, we face a more discomforting truth: we’re not as far along as we think.

Jeremy Klaszus is the editor of the Sprawl, a new Calgary journalism venture that launched in September.