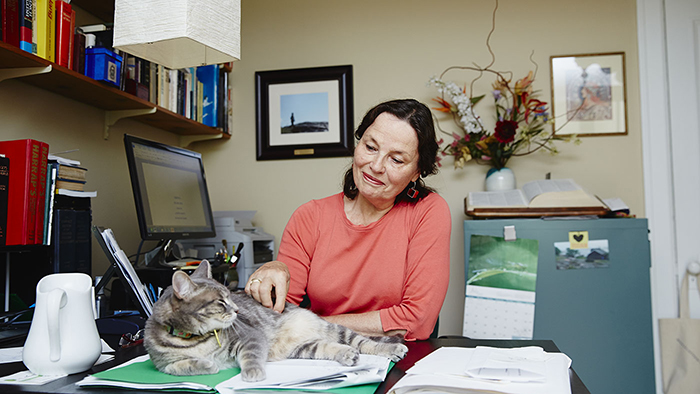 Linda Gaboriau works on the third floor of an elegant stone walk-up, a shade to the Anglo side of boulevard Saint-Laurent, which divides Montreal’s English west and French east. One of Canada’s most prolific translators and winner of Governor General’s Literary Awards in 1996 and 2010, the transplanted American has written more than 100 French plays into English. She learned the vagaries of her trade early on, growing up in Massachusetts where many French Canadians had settled. One of her father’s buddies was called Bolio by his friends. “Only when I saw it spelled did I see it was Beaulieu,” she said in a New England drawl unspoiled by five decades of living in Quebec.

Above her desk, Gaboriau keeps a row of other people’s books, or so the spines say; her name appears in smaller print. Her tool kit fills another shelf: a red leather Harrap’s, French–English; Partridge’s dictionary of slang; an encyclopedia of Biblical references; a history of footwear; Gray’s Anatomy.

But sometimes dictionaries fail. For five years, on and off, she has been wrestling with the text of Christina, The Girl King. Written by her friend and long-time collaborator, Michel Marc Bouchard, who happens to be one of Quebec’s most important living playwrights, the script features the eponymous queen of Sweden, a rebel of the Renaissance who scandalized her cold Lutheran court by dressing like a man, cursing like a sailor, and converting to Catholicism. (The queen’s long-suspected lesbianism, a focus of the play, was perceived as one of many eccentricities.) The show had a triumphant run in Montreal in 2012; a few months later, the Stratford Festival in Ontario commissioned Gaboriau to translate the work for its English debut this season.

Well into spring rehearsals, Christina remained knotted with stubborn French phrases that resisted translation. Bêtise à cheveux was particularly mulish. “It’s not really a joke,” Gaboriau said, sitting at her desk with the manuscript in front of her. “It’s just such a funny expression. And I don’t have it.”

It became “curly fool” in her first draft, written on her desktop computer, with a photocopy of the French original sitting on a metal reading stand and marked up with chartreuse highlighter. The original phrase, though, is something richer, layered with wit.

The translation eluded her again as she corrected that rough draft by hand. But it didn’t elude Bouchard, when he sat down at the long pine refectory table, salvaged from a convent, which stands in her dining room and serves as the setting for her meetings with playwrights. “We’re like an old couple,” Bouchard explained later. “Communication is easy.” Dislodging jokes from their French moorings, however, remains a challenge. “Sometimes I’m playing on the double meaning of a word, and the double meaning doesn’t exist in English,” he said.

Bêtise à cheveux is one of those times. “Michel Marc says it’s not the same—and it isn’t the same!” she said. “In French, it’s fantastic! She’s saying, You’re a walking idiot.” But “curly fool” didn’t quite capture the colour of Christina’s insult.

“I do the dishes trying to find a solution to bêtise à cheveux,” she sighed. For now, Gaboriau has settled for “you frilly fool,” which rolls off the tongue more easily.

Flurries of red pen on another draft of Christina attested to other problems. After hearing Stratford actors read her translation aloud in Toronto last fall, Gaboriau suggested swapping out the word “debacle” for “collapse.”

“ ‘The sound of a debacle,’ ” she read, before retching dramatically, “doesn’t work. Unless you add something like the ‘sound of my world collapsing.’ It’s not in the French, but I might have to go there.”

Gaboriau’s work has to perform a double translation, from French to English, and from page to stage—keeping faith with the meaning of the original text, but also sounding musical in the mouths of the actors. Ideally, her Christina will give anglophones a taste of Quebec drama’s distinctive grandiloquence: its luscious verbosity, its fondness for soliloquies and ruminative asides. English-speaking troupes often flatten these attributes into a muted psychological realism—Brando reading the Bard.

It helps that Christina is a period piece, mounted at a festival with Shakespearean roots. “The delivery can be more imperious, more formal, very articulate. The vocabulary can sometimes be a touch archaic,” she said. So her script billows and struts, high-flown and baroque. The kind that stirs the most lethargic lungs; the roar of a deep fault; a misleading moon—these phrases aren’t tailored to a method actor’s mumbling.

A play’s spirit is a great deal harder to preserve than the exact meaning of particular words. Gaboriau knows as well as anyone that Stratford’s Christina is not going to be the play audiences saw in Montreal. Bêtise à cheveux will be missing. So will many other things. But what book, what performance, gets the benefit of something other than a hard-earned half-understanding?

Seated at her long pine table, she spoke slowly: “You throw the bottle to the sea, right? You don’t know who will pick it up and who will read what message.”

Eric Andrew-Gee has published with the Toronto Star, Maisonneuve, and The New Republic.