Afew months ago, Arizona retail consultant Bobbie Hollowell arrived in Fredericton, ankle-length fur coat and all, to manage the liquidation of the city’s two Zellers stores and make way for Target’s “Project Bacon.” In 2011, the American discount chain had bought 189 Zellers leases across Canada for $1.8 billion, with plans to occupy about two-thirds of the properties. In Fredericton, this meant that only one Zellers, located in a bustling retail zone, would reopen as a Target in late 2013. The less desirable north side location, in a Brookside Mall storefront, closed to the public in January.

Tall, gorgeous, and black, with a wicked platinum Afro, Hollowell stood out in the predominantly white city. A week before the closing, she strode around the increasingly cavernous space writing prices on pink paper signs with black marker and sticking them to everything that wasn’t bolted down, including huge shelving units, and even to things that were bolted down, such as the cash registers. Her company’s motto: “Finding value where others see none.”

When native species profit from invaders 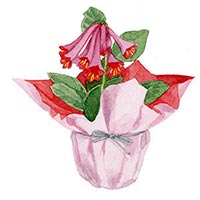 Invasive species are not all bad: they can provide trickle-down benefits for native flora and fauna. In Pennsylvania, for example, two invasive Asian honeysuckle species turned out to be irresistible to local birds, correlating positively with the abundance of avian visitors to the area. The birds in turn consumed 96 percent of the fruit from a native species of nightshade. This resulted in 29 percent better seed distribution than from the fruit they ate from nightshade with fewer honeysuckle neighbours. Biologists have compared it to “the car dealership effect”: when competing businesses converge on a small area, they all profit by attracting more customers. Some business people, such as Reitmans CEO Jeremy Reitman, suggest the same is true of foreign retailers expanding into Canada. A hit brand like Target or Nordstrom could attract vital foot traffic back to embattled homegrown retail hubs that have lost market share to online shopping.

“A week from now, it will be like this store never existed,” she said with a wide sweep of her hands, as employees in red shirts consolidated merchandise into progressively smaller containers, all marked with signs offering 70, 80, even 90 percent off. The parking lot was more full than it had been in years.

Slow-moving packs of shoppers pushed carts from stack to stack, hunting for bargains, even as men in torn jeans and baseball caps collapsed the shelving units around them. The noise of deconstruction was deafening. A stooped, white-haired man wheeled a dozen teetering towers of half-price canned tuna toward the checkout. “Mommy’s going to spend a lot of money,” said one brunette to the infant perched atop her shopping cart, which she had mounded high with shoes, jeans, umbrellas, and toys. “Should we say enough’s enough? ” Heavy women loitered and leaned on their carts, loudly gossiping about what was going to happen to the building, to the employees.

A few days later, caution tape corralled a smaller square footage, lending the impression that the picked-over goods were being sucked out the store’s two exits. On a tall ladder, a man in an orange safety vest ripped down the burgundy vinyl sign advertising the restaurant in the back corner. Joyce Williams, who ran the place for two decades, recalled Joan Coates, a woman who had eaten dinner there every day of the week since it opened. “She took it really hard,” said Williams. “She got me to say thank you and goodbye to everyone over the PA system. Now, that was sad.” Williams planned to take a vacation in the Dominican Republic when the store closed. It was going to be her first time on an airplane.

On the final day, a herd of double-parked shopping carts held the remnants of the once-bustling store. One was full of DVDs, another with women’s underwear, another with dog shampoo and pet toys. “It all comes down to one last customer,” said Hollowell. “I told you I’d sell it all.” The north side Zellers’ last customer was John Jardine, who planned to unload the goods at his liquidation warehouse.

Employees, primarily women over forty, crowded around the carts, ringing in the final items. “Some of these people have been here for decades. Most of them will probably never work together again,” said Jardine, his silver wraparound sunglasses perched on his head. “This whole thing is sad for us, too.”

Tammy Paul, a thirty-seven-year employee, watched a balding man with a stringy crescent of shoulder-length light brown hair as he carefully stooped and knelt to sweep up dustballs. Her face was tight. “For me, it’s a whole life. I started at Zellers when I was sixteen. I remember the stockroom when this store opened,” she said, looking at the metal shelving coming down around her. “It feels like déjà vu backwards.” She was planning to drive across Canada for the first time with a few members of her “big family”—three former co-workers.

The sense of loss was palpable, even for Hollowell. “Last Wednesday morning, they started crying, and then I started crying. I could feel people’s pain,” she said, wincing. “A lot of them have no clue what they’re going to do next.”

A week after closing, it was hard to tell that the Zellers had ever existed. A grey-haired woman in curlers shuffled up and sighed. “Big, isn’t it? ” she said, avoiding eye contact. “I came to take a look, but there isn’t much to look at, is there? ”