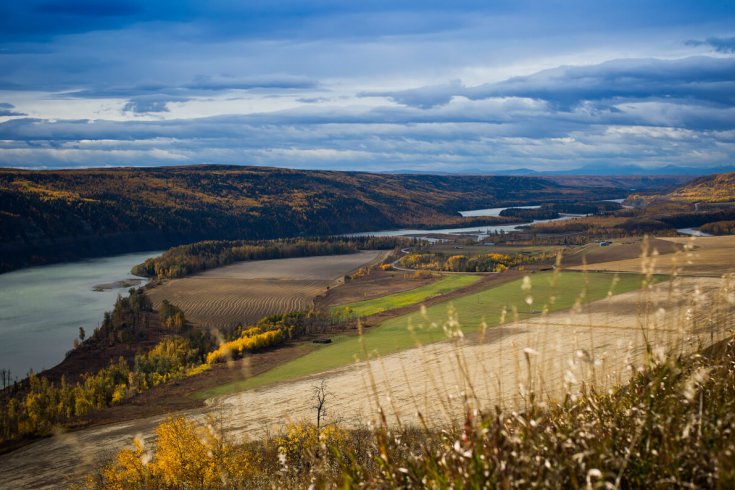 Outside the Sportsman’s Inn in Hudson’s Hope, a motel that has not changed its decor since the last Peace dam was built in the late 1970s, a scruffy man in baggy track pants asks me about the canoe on our roof. I tell him we’ve just spent four days paddling the Peace. “Paddle it while there’s still a river to paddle,” he spits. “They’re even killing protesters over it.”

He’s referring to the mysterious death of forty-eight-year-old James Daniel McIntyre in July 2015; McIntyre was shot by local RCMP outside a Site C open house in nearby Dawson Creek. He was later confirmed to be affiliated with the hacktivist collective known as Anonymous, a loosely organized cyber-protest group known for hacking industry and government websites. McIntyre was wearing the uniform of Anonymous—a white “Guy Fawkes” mask—and allegedly refusing to drop a knife when he was shot dead on the sidewalk outside the event.

“We will most certainly avenge one of our own when they are cut down in the streets while protesting the earth-wrecking environmental policies of the Canadian government,” read a July 18, 2015, statement credited to the group. “Behind this mask there is more than flesh and blood. Behind this mask is an idea and ideas are bulletproof.”

Little is known about Anonymous, whose organizational structure has been compared to that of silver-haired hamadryas baboons. (The animals live as part of a larger collective, but form independent splinter groups based around a single dominant male, often acting independently of the wider group.) The victim was known to be opposed to the dam, but the connection between the open house and the shooting was not clear. The RCMP had been called initially because a protester inside the event was causing a disturbance; when the police arrived, they encountered a different man—the masked McIntyre—outside. Almost a year later the Independent Investigations Office of BC, a civilian-led body that investigates police incidents that result in death or serious injury, remains silent.

There are people in the Peace, like the man we met in the parking lot, who to this day believe the RCMP deliberately shot and killed James McIntyre for his opposition to Site C. The episode put an immediate chill on peaceful protest against the project, according to Arlene Boon. After the shooting security was ramped up, and many people in the Peace felt wary of attending Site C protest events. Boon says BC Hydro used the shooting as an excuse to limit the number of open houses and afterward, whenever BC Hydro was out in the valley doing work after the shooting (like on road realignment, for example), they had a security detail in tow.

I am talking with Boon on the edge of her recently cut alfalfa field—a stretch of rich, black soil on the banks of the Peace River near her home. Ben and I are gathered here with about forty other people as part of an annual fundraiser for the Peace Valley Environment Association, the group once led by Leo Rutledge. It’s an upbeat crowd. We mingle with a few random journos in attendance, including reporters from the Alaska Highway News and CJOB TV in Dawson Creek.

This agricultural land is like a little piece of California set in the BC north, minus the state’s devastating multi-year drought. In a graded rating system from Class 1 to Class 7 (where the classes indicate the degree of limitation imposed by the soil in its use for agriculture), it is rated Class 2. There are very few limits to what can be grown here. Farmland like this is more than just good soil: the Peace River valley is a unique east–west conduit for warm ocean air, in a region otherwise dominated by cold Arctic air. That partly explains why the bottom lands of the valley can grow fruit and vegetables usually produced farther south. (One visitor to the region in 1873, a botanist, compared the growing season and conditions here to that of Belleville, a southern Ontario farming centre near Toronto.)

It’s here that I meet Mike Van Zandwyk, an aspiring chef and farmer who has just rented an eight-acre plot of land adjacent to this field. Mike’s in his early twenties, and the cartilage folds of his left ear are pierced multiple times by the same hooked earring (he looks like the victim of a terrible sports-fishing mishap). He has come to the valley from the Okanagan with his partner Bess to farm before it’s too late. “This is the breadbasket of northern BC,” he says with a sweep of the hand. “There’s not a lot of people growing food here right now. We’d like to change that.” Investing time and energy in farming this land is an act of protest for aspiring farmers like Van Zandwyk, in recognition that Site C will impact close to 10,000 acres (an area roughly equivalent to ten Stanley Parks) of Class 1 to Class 5 agricultural land. “With Site C, the jobs and money will come and go. Then what? If more people farmed here, we could build jobs without Site C.”

Underutilized as the land may currently be, there is no denying its productivity potential. Local farmers Blane and MaryAnn Meek, for example, reported growing eighty-two bushels per acre of canola in 2011, on flats owned by BC Hydro adjacent to Wilder Creek. The recent Alberta provincial average, the highest otherwise in western Canada, was 36.4 bushels. Yet even the Joint Review Panel that scrutinized Site C ultimately agreed with BC Hydro that the permanent loss of the valley-bottom farmland here would not be significant in the wider context of agricultural production in BC or western Canada. In summer 2016 I asked former Joint Review Panel chair Harry Swain why they came to this conclusion. “Largely because the panel believed in international trade,” he said. “We’re not going to have self-sufficiency in food in BC.” He added that farmers downstream of Site C, outside of the shadow of the dam, were also not growing a lot of vegetables and fruit. “Why isn’t that land used for growing vegetables to feed a million people? Well, because you can’t make a living doing that.”

It’s a fact that in the Peace region today, most people are dependent on fruit and vegetables trucked in from Alberta and California. Province-wide, about 60 and 70 percent of BC’s imported fruits and vegetables respectively come from the US, with most grown in California, which has long been feeding us. But the value of all the high-quality, underutilized agricultural land we have in the province will only grow in value as the capacity of the southwestern United States and Mexico diminishes, particularly from the parching effects of drought. “Agriculture in California is vulnerable to predicted impacts of climate change, including less reliable water supplies, increased temperatures, and increased pests,” reads the state government’s California Climate Change agriculture homepage. The state, which is reeling under the worst drought on record, has seen farmers (and many other water users) drilling ever deeper for water, to the point that in 2015 at least 60 percent of California’s water consumption came from such deep-drilled wells. A 2015 report by the Pacific Institute probing the impacts of the latest drought found that current levels of groundwater use in California far exceeds the natural rate of recharge. The result, say the authors, has been a “decline of groundwater levels across large parts of the state, saltwater intrusion and other water-quality impairments, land subsidence, lost storage, and increased energy costs, among other adverse impacts.”

Taking the long view, it seems like common sense to ensure that none of our finite, prime farmland is destroyed unnecessarily, regardless of how much food is being grown there at this moment in time.

Excerpted from The Peace in Peril: The Real Cost of the Site C Dam By Christopher Pollon, with photographs by Ben Nelms. Harbour Publishing (2016).

If a Tree Talks in the Forest, Does It Make a Sound?