Can We Leave Now? | The Walrus
Skip to content 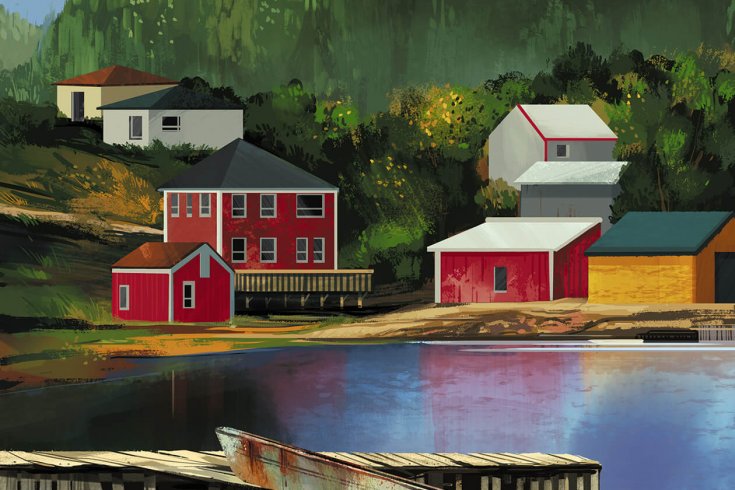 Cyril oxford has lived in Little Bay Islands, Newfoundland, for seventy-three years. After five decades captaining a fishing boat, he spends his retirement chopping wood and chatting with neighbours. From his one-storey bungalow, he can see the sun rise over the Atlantic Ocean, framed by the crescent-shaped harbour. In the summer, he lives in one of the most beautiful, secluded places in the province—but Oxford doesn’t see it that way. “It’s a dead island,” he says. “Dark and dingy.” One windy day in October 2015, he drove his grey four-wheeler to the post office and mailed a ballot to the provincial government. The piece of paper contained his answer to a simple yes/no question: Are you in favour of shuttering your village and moving away?

Residents of Little Bay Islands—a cluster of five islands half a day’s travel by car and ferry from St. John’s—were taking part in a provincial program designed to aid outport communities struggling to survive. If 90 percent of a village votes for relocation, the government will consider cutting services—electricity, garbage removal, school maintenance—and awarding each property owner a lump sum of at least $250,000. Annual maintenance of the Little Bay Islands ferry route costs the government $300,000, and hydro costs $600,000, so abandoning an expensive, remote village might help alleviate Newfoundland and Labrador’s $1.8 billion deficit.

For Oxford, a widower since 2008, relocation would mean the opportunity to join family elsewhere. But without the money, he’s stuck in a dying community of approximately 100 people. His village once had more than five hundred residents, a dozen or so businesses, and one of Newfoundland’s largest fish-packing and exporting companies. As fishing started to decline across the province in the 1950s and ’60s, islanders began moving to bigger towns to find jobs. Seniors, sustained primarily by employment insurance and pension wages, stayed behind.

The provincial government announced its first resettlement policy in 1954, and 110 communities relocated over the following decade. But Little Bay Islands survived.

By 2010, the fish plant that had been the heart of the community’s economy had closed down. The median age was fifty-three, and unemployment was more than 75 percent. Villagers hoping to revitalize the island focused on boosting tourism, devising plans for better garbage management, and creating a new municipal website. But then the ferry—needed for a trip to the grocery store or the doctor—was rerouted. For Oxford, who doesn’t own a car, the trip to the nearest town and back that once took a couple of hours now takes a whole day and a $150 cab ride.

When Newfoundland announced it was tripling its relocation offer from $80,000 to $250,000 per household few could justify staying.

Few signs of economic life remain in the community today, apart from the diesel-generating plant—which provides the islands’ electricity—and Aunt Edna’s Boarding House B&B. When Newfoundland announced it was tripling its relocation offer from $80,000 to $250,000 per household (enough to buy a large house in neighbouring Springdale or a small one in St. John’s), few could justify staying.

Doris Tucker, a seventy-seven-year-old retired nurse who lives a few doors down from Oxford, is a vocal opponent of resettlement—“the destruction of outport Newfoundland,” she calls it. Because of her dedication to the village, some of her friends call her “Mayor Tucker,” despite the fact that the current elected mayor lives down the road. She was born and raised in Little Bay Islands and moved away decades ago for work. She now spends the warm months in the village—where she can afford to own land and three houses—and the rest of the year in Florida and Montreal.

Some islanders consider Tucker a “seasonal local”: in the summer, the islands’ coasts are peppered with part-time residents who come to enjoy tranquil Newfoundland. Their houses are often grandiose versions of the typical saltbox home—two-storey buildings painted in pastels, with private docks and motorboats at the ready. Come winter, they escape west and south, while year-round residents endure the cold isolation. The seasonal–permanent divide caused little friction until villagers realized that only full-timers were eligible to vote on resettlement. Many who considered Little Bay Islands home, but worked or lived elsewhere, were excluded. Eighteen families and individuals appealed—including Tucker, who used her detailed agenda to prove she had stayed on the islands for the required 183 days of the year, two years in a row. A retired judge reviewed the cases and granted voting rights to her household and six others.

In April 2013, the community applied for relocation, forcing the Department of Municipal Affairs to calculate whether the village’s removal would be profitable. Tensions grew between those who wanted to leave and those who wanted to stay. Tucker and her friends launched community events and championed a heritage society, hoping to convince neighbours to change their minds. Other residents started to pack up their belongings and look for real estate elsewhere. The mayor at the time, Perry Locke, resigned, telling media that he had been bullied out because he had one of the islands’ few jobs, at the hydro plant, and was against leaving. Friends he’d known for decades refused to look him in the eye.

The longer the government took, the more locals despaired. Bids by other villages had failed because of setbacks related to voter registration and cost analysis. Part-time residents who were denied ballots in another village had filed a class-action lawsuit against the province. An access-to-information request filed by a Little Bay Islands resident revealed a troubling email from a treasury-board staffer: “Currently, the Department does not have a budget in place for relocations…. If approved, where will the funds be sourced?” After the email’s release, politicians repeatedly stated that the money existed, but few in the community believed them.

More than two years went by before the province determined it made financial sense for Little Bay Islands to relocate. In the fall of 2015, Oxford cast his ballot in favour of relocation. Tucker cast her own, against. It soon became impossible to keep votes confidential. Spouses disagreed with each other, one wanting to stay home and the other yearning for a quarter-of-a-million-dollar payout. Ninety-five people voted, many more than had participated in the original petitions—a discrepancy Oxford blames on the part-timers, who, he says, lied during their appeals in order to get a ballot.

When the vote was tallied, eighty-five people were for resettlement, and ten wanted to stay—a result that was less than half a percent shy of the threshold. Tucker boasts that it was her “no” ballot that made the difference. The blowback from the rejected resettlement bid, coupled with other villages’ previous complaints, forced the province to announce it would be reviewing its community-relocation policy, effectively putting the initiative on hold. Another village in southern Newfoundland with its own failed resettlement vote started a petition to lower the 90 percent requirement. For those in Little Bay Islands, the referendum initially seemed to offer the promise of salvation. When their optimism was dashed, though, so too was the hope that the government could provide any kind of resolution.

Today, gossip flourishes on the islands. Some locals are leaving on their own, if they can afford to. Oxford, and a few dozen neighbours, will remain through the winter. He resents those who voted against resettlement and then proceeded to leave only weeks later for their other homes. “We’re babysitting the town for them,” Oxford says.

Near the harbour, trailer homes are overgrown with plants. An eerie concrete playground, fenced all the way around, looks as if it hasn’t been used in years. The fire department is defunct, and, in June, the only school saw its last student leave. Oxford has lost the hope he once had, when he was sure he would be able to leave. “It’s hard to be lonely,” he says. “It’s even harder when people tell you that you have to stay lonely.”

Viviane Fairbank (@vivianefairbank) is a writer based in Montreal and the former head of research at The Walrus.
Irma Kniivila

Irma Kniivila is an illustrator and artist who has recently completed projects for Marvel and Boom Studios' Joyride.