Exorcism at Ground Zero | The Walrus
Skip to content 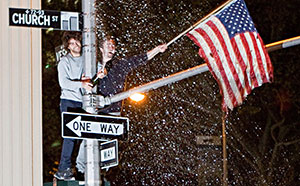 On the evening of May 1, as my friends back home prepare to hit the polls, I lie on my couch in Stuyvesant Town, cycling through my apps one last time for Canadian election news. And there it is, something many thought they’d never see: Osama bin Laden is dead. I jump up and go to the computer. After President Obama’s words, msnbc.com switches to a live feed of a gathering at the White House gates. Brian Williams says something about young people, and about Lower Manhattan.

I hop on my bike and ride from the East Village down Avenue B. It’s quiet in Tompkins Square Park. The usual drunks pull on smokes outside the Avenue A bars. No revellers, though. On Houston, it’s nothing more than a slow Sunday evening. Down Broadway, it’s all yellow cabs and the odd sleepy worker. Then a murmur, a bit of incoherent not-traffic noise. Then a dull roar. Here we go: the ghosts of the Bush administration stir; Clint Eastwood’s gonna hang ’em high.

Yeah, it’s a roar all right, erupting with frequency. Getting closer, I realize Williams is right: almost everyone here except the cops was just a boy or girl when the nightmare began. Like a riot of college kids going ape after a World Series win, this could get ugly. “usa, usa, usa!” come sporadic chauvinistic chants. “O say can you see,” etc., a spontaneous rendition of the national anthem. Exhortations to cheer come from above: a couple of guys scamper up lamp standards to rally the crowd, waving oversized Stars and Stripes. The Nice Canadian in me, confronted with jubilation over a murder, urges me to flee.

But this is no lynch mob; it’s a block party. The young people of Vesey Street generate their own mass euphoria over the news. Few of the testosterone-pumped males are at sports-stadium-level blood lust. Most of the men, and especially the women, are happy, relieved, and visibly proud. Taxis pull to a quick halt, disgorging more young people, who approach at a saunter and, once they get close enough to hear the whooping, gallop toward it. They could be down here to get loaded, but I don’t see booze and I don’t smell pot.

This isn’t the noxious fist pumping of the Bush years. How could it be, when the most expensive war machine in history could not find one man for almost ten years?

These kids endured a colour coding of their lives into levels of fear. Their personal freedoms were diminished in the name of protection. They were told they would not be allowed to look at America’s dead coming home in body bags; then they were told they needed to see the price of war. They looked at pictures of American mercenaries strung up in Fallujah, then endured the shock of seeing their own soldiers delight in torturing Iraqis at Abu Ghraib—horrific images all, seared in perpetuity. America was the greatest country with the greatest amount of freedom, they had always been taught, so why did they grow up cowering?

Ten years of pent-up frustration. This is a mass exhalation of collective relief. I send a note to a friend at the Globe, who girds himself to cover the craziest Canadian election finish ever. He emails back: “Wild. The children of Homeland Security.”

I could understand if Bin Laden’s death had spurred a transition from frustration to bully posturing, yet I don’t see the revellers as freakish warmongers or the arrogant children of empire. As a Canadian liberal, I need to remind myself: we have always been a satellite to empire. Usually safe in the attic, we can pretend that ours is a more refined version of democracy. Now that I’m in the belly of this, smug thoughts of our civilized, non-combative society seem callous. I never had to grow up with the ignominy of an empire brought to its knees—an empire any two-buck dictator thumbs his nose at these days—except from the vantage point of that panic room upstairs. We might have laughed among ourselves and with Jon Stewart. These kids did, too, but still it ached.

I acknowledge their plight, enduring this hapless interregnum. It’s my little revelation: I empathize with the unbridled joy of tonight’s exorcism. The wicked warlock of the West is dead, and good riddance. Kafka’s upside-down bug, confused and afraid and befuddled by Homeland Security’s restrictions, rights itself and walks. Yes, change has come. And now, for this group, so has hope.

Having taken it all in, I turn back east. At Broadway, cabs are still charging toward ground zero—Mondrian’s Broadway Boogie Woogie updated for a new generation. This is just getting started.

As the shadow of fear lifts, this is as close to catharsis as they’re likely to get. The empire is in decline, China is a worrisome rival, yet it’s still an empire, and they know it. Bin Laden’s dead body untethers the giant, at last. No more breast-beating cartoon patriotism—just pride.