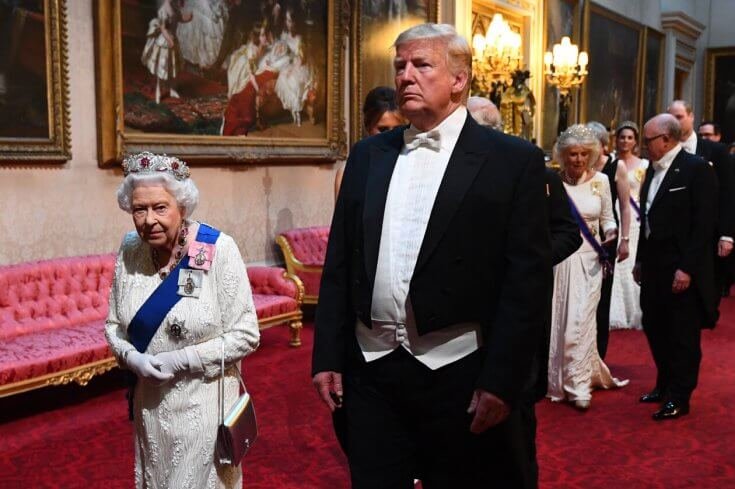 In the end, it was the clothes. Donald Trump’s tour of England was full of standard Trumpisms—insulting the mayor of London, calling Britain’s NHS hospitals a “sea of blood” because of a spate of knife attacks, using the commemoration of D-Day as a political prop—but it was the clothes that finally revealed him. Standing next to the royal family, Trump, in his ill-fitting white bow tie and tails, was a living, breathing absurdity, a symbol of the darkly nonsensical and badly put together condition of the world order in the early twenty-first century. First, he appeared absurdly comic, then terrifyingly absurd. What does it mean that a man who does not know how to dress is the most powerful man in the world?

Of course, this is nothing new, in a way. We’ve gotten used to this kind of sartorial awkwardness from Trump—the Scotch-taped ties, the mismatched suit, the overlong khakis. But there was something about sitting next to Prince Charles that made Trump’s bad dress sense even more glaring. For one thing, Prince Charles, like Trump, is a ridiculous old man. The idea that his face is likely going to be on the money of countries all over the world after the Queen dies is one of the strongest arguments in favour of republicanism that exists. And yet he dresses so well. I mean, the British Empire is defunct but Savile Row is still Savile Row. On every occasion, the prince was perfectly articulated, sumptuous but restrained, the definition of appropriate. You wouldn’t notice what he was wearing until you realized how gorgeous it was. In his white-tie outfit, Trump looked like Cogsworth from Beauty and the Beast, a servant who had just regained human form after being a clock.

Trump is more than a poor dresser. His clothes are the sign of profound character failure. His total misunderstanding of the most basic elements of formal dress, a misunderstanding he shares with his adult sons but not his son-in-law Jared Kushner, who dresses well, is flagrant evidence of the deep sources of his toxic masculinity. No one seems to have loved him enough as a boy to instruct him on key elements of self-presentation. Worse, he will not listen to experts. People laughed when the president wore a blue jacket and black pants, but think about what the mismatch meant: Did no one close to him tell him? Maybe no one could tell him. His staff is either profoundly unobservant or unwilling to confront him even with such a small and indisputable detail. What else can’t they tell him?

Trump’s outfits are the dressings of a vision of patriarchy that lacks many traditional manly virtues. For professional men, the question of formal wear is not, by any measure, as nuanced or difficult as it is for women. It’s not a reflection of personality to anywhere the same degree. It’s pretty simple really. You have to be able to follow protocol. You have to have enough money to go to a decent tailor. Then you have to know enough to know that the tailor knows more than you. That equation, simple as it is, requires virtues that are vastly more important than clothes—intelligence, restraint and humility. When a man, visiting the Queen, wears a collar that makes his neck look like a rising loaf of banana bread it is because he will not listen. Trump obviously cannot. And that has political consequences that are terrifying to contemplate.

Only someone with narcissism as a pathology could dress the way Trump dresses—that’s not exactly a surprise. But men’s fashion in general, during Trump’s time in office, has defined character in ways unknown to any other period of American history. The clothes have proclaimed the man, on all sides. Former Trump campaign chairman and convicted felon Paul Manafort, with his brown python and ostrich jackets and his $500,000 clothing bill, resembled an Eastern European con man who’s just made a big score—which wasn’t too far off the mark. Robert Mueller, who once criticized an assistant director at the FBI for wearing a pink shirt, dresses like he’s living in a Brooks Brothers ad, in a world where the American people educate themselves on important political matters by reading reports and parsing complex legal language. He dresses like he could afford to ignore the celebrity-driven mass-media culture of the world as it is, as if he’s living in a time when the Republican Party stood for self-reliance and duty. In short, he dresses like he’s living in a nostalgic fantasy, and the Republic has paid a heavy price. By refusing to turn himself into a legal celebrity, and remaining in the world of his nostalgic fantasy, Mueller killed any real effect his report on the Trump-Russia investigation might have had.

On a state visit, clothes proclaim more than the man. They proclaim the country. As Trump stood next to the royal family, it became clear what the US president lacks. He lacks class. He is deliberately, in all facets of his presentation, unclassy, anticlassy. And his unclassiness is unquestionably part of his appeal. He dresses like a parody of a wealthy man, like a WWE caricature of a mogul, which he has played. That figure is what the American people elected: a president who will serve McDonald’s for dinner at the White House.

Maybe, in America, that kind of classlessness is appealing in its way. But when you see it out of context, staged abroad, it is gruesome. The president looked insular, immodest, ridiculous, ugly. He appears that way because that’s what American power is. It’s not an accident that American men in power look like crap these days.