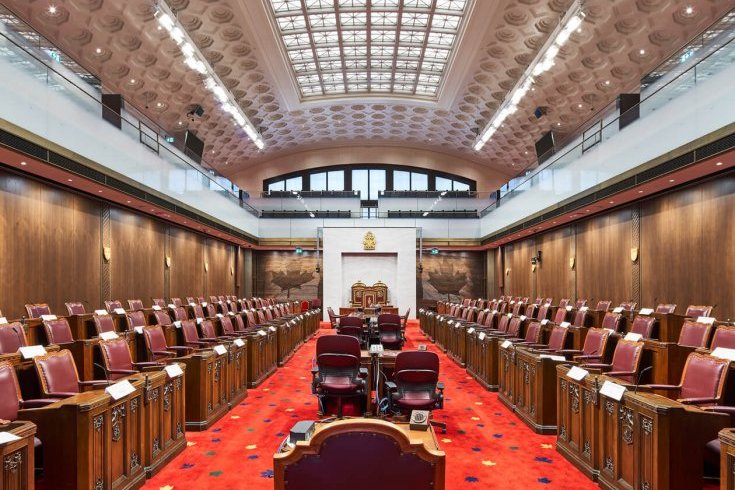 The Senate chamber in the former baggage concourse at Union Station. Technicians restored the original coffered ceiling as part of the renovation.

Canadians can’t stand their Senate. In a Nanos Research poll from March 2018, one in five respondents reported that, when they hear the phrase “Senate of Canada,” the words ineffective and pointless immediately spring to mind. Others described the Senate as corrupt, outdated, and a waste of money.

The upper house of Parliament was created in 1867 as a kind of review board to scrutinize bills before they became law—and to enable what John A. Macdonald, Canada’s first prime minister, called “sober second thought.” The country’s 105 senators are appointed by the Governor General on the advice of the PM. Technically, they have the power to kill parliamentary bills outright, although they haven’t done so since 1939.

While the Senate doesn’t have public opinion on its side, it does have the constitution. In a 2014 decision, the Supreme Court of Canada ruled that abolishing the Senate—a move favoured by nearly a quarter of the country, according to the recent Nanos survey, and at least one political party, the NDP—would require unanimous consent from all ten provinces, the House of Commons, and the Senate. (Yes, the Senate would have to vote for its own demise.) As long as the Supreme Court’s judgment stands, the Senate isn’t going anywhere.

Even reform is hard to pull off. In 2006, Stephen Harper took office as prime minister with a plan to populate the Senate with elected officials. To this end, he introduced a bill that never became law. Justin Trudeau opted for a less-ambitious overhaul: rather than being chosen via prime ministerial fiat, the candidates now have their names submitted by an independent advisory board to his office for approval. This idea drew criticism—could senators really be nonpartisan if their tenures had been blessed by the prime minister?—but at least it was feasible.

Perhaps what’s called for is a little rebranding. For some detractors, after all, the Senate just seems weird. The group convenes in a cloistered chamber decorated with lavish wood panels and heraldic symbols. Each sitting begins with a ritualistic parade, led by a baton-wielding dignitary, called the usher of the black rod. The whole thing is benighted and cultic. What, one wonders, might the Senate chamber look like had it been conceived not in the 1860s (when it was constructed, alongside the House of Commons, as part of the centre block on Parliament Hill) but today, with our era’s cultural anxieties in mind?

A possible answer can be found 400 metres east of the Hill, in an historic train station that, for the coming decade, will house a temporary Senate while the original chamber undergoes an intensive restoration. (The House of Commons, also being restored, has been temporarily moved to the west block, one of the three main Parliament buildings.) Diamond Schmitt Architects, the Toronto firm commissioned on the temporary-Senate project in a joint venture with Ottawa locals KWC Architects, initially had two priorities: to rehabilitate the station, an architectural treasure in its own right, and to give the upper house a respectable short-term home, which officially opened for business this February.

Intentionally or not, the two firms have achieved something else. They have done, through architecture, what Harper, Trudeau, and other politicians sought through legislative reform. They have given the Senate a facelift.

In 1859, when British architect Thomas Fuller was hired to design the centre block of Canada’s Parliament, high Victorian Gothic was the leading design movement in Britain. Builders imitated the cathedrals and castles of the late Middle Ages—an architecture of spires, arches, and rugged masonry. The movement had immense appeal among the members of Young England—a cohort of British conservatives who favoured an absolute monarch and a powerful church—and was likewise popular among the Canadian Tory elite. The Parliament’s design thus reflected prevailing notions of what the new country would be—anglophilic, antirevolutionary, loyal to the queen.

Most of Fuller’s building burned down in 1916, but it was diligently rebuilt. It wasn’t quite the same rambling castle—the hallways were more spacious, the layout more symmetrical—but it kept its heavy ironwork and steeply pitched roofs. The Senate meeting room still resembled the British House of Lords, the aristocratic chamber at Westminster (which, to this day, includes hereditary members).

Four years before the Parliament fire, on the opposite side of the Rideau Canal, another landmark building opened: Union Station. It was built in the Beaux-Arts style, known for gracious interiors, classical proportions, and ornamented columns reminiscent of the ancient democracies of Greece and Rome. If the Canadian Parliament building represented aristocracy and tradition, the station bespoke grandeur and democratic modernity.

In the interval between 1966, when the last train left Union Station, and 2014, when Diamond Schmitt and KWC started their work on the Senate’s provisional home, the building had been a government conference centre. Its interim managers hadn’t been kind to it. Thick carpeting covered the marble floors, drywall partitions broke up the space, and the vaulted ceiling in the old baggage room had been painted a colour you might call booger green. Martin Davidson, the lead architect on the temporary-Senate project, sought to restore the spirit of the original station.

Today, you enter, as you did back in the 1910s, via a lobby on the north side that connects to the main waiting area. Suddenly, the room expands in all directions: upward to the ceiling, downward along a grand staircase, and left and right into two spacious wings, which now house the Senate committee rooms. On the south end of the waiting area, as you approach what used to be the ticketing block, the space tightens again, only to open up one more time as you enter the baggage concourse, where the Senate chamber now resides. Architects of the Beaux-Arts school wanted visitors to feel as if a story were unfolding—a drama of vastness and constriction—as they journeyed through a building. Diamond Schmitt has honoured that impulse.

It has also restored and augmented the original Beaux-Arts finishes: creamy plaster, opulent marble, oak and walnut panelling, and decorative bronze. In the old Senate, the main artistic attraction was a suite of large-format oil paintings depicting the trials and devastation of the First World War—a tribute, in a conventional medium, to our country’s noble service to the motherland. In the new station-Senate, the closest equivalent to these works is a trio of massive panels made of perforated bronze, which hang in the waiting area. Walk far enough from these pieces, and you’ll see that the holes in the panels cluster to form images of storied Canadian vistas: the Bay of Fundy, Lake Louise, and the Kinsol Trestle.

Most other decorative accents in the building also depict natural subjects. Woven into the carpet of the new Senate chamber are colourful maple leaves. Along the walls are walnut pilasters, carved, with a computerized cutting machine, to resemble the ridges and grooves of a pine cone. As for imperial imagery, there’s this: on the chamber carpet, in among the maple leaves, is an icon comprised of overlapping circles, like something on a New Order album cover. Some visitors won’t notice this motif, and only the hard-core monarchists will see it for what it is—an abstract rendering of the Tudor rose, England’s national flower and an emblem of the British empire dating back to the late fifteenth century. This symbol is a concession to tradition—the Senate, after all, is where Queen Elizabeth II, a Tudor descendant, delivers her occasional addresses to Parliament—but it’s executed with the lightest touch possible.

Such a subtle approach seems very much on brand. Canada is still a constitutional monarchy, but this aspect of its identity is less important than it once was. Our temporary Senate—with its emphasis on Canadiana over Victoriana and natural imagery over monarchic symbols—captures this reality. It represents a nation Canadians might recognize as their own, and it seems a more suitable home for a legislative body that could see further modernization.

Still, this wouldn’t be an article about Senate reform if it didn’t include at least one unrealistic proposal. So here goes: we’ve spent a great deal of time and money moving the Senate into its temporary home. Why not leave it there?

The restoration of the old Senate chamber could still proceed. But we’d be restoring it as a museum. When the renovation is complete, tourists could visit it any time of year to marvel at the heavy chandeliers, the pointed arches, and the bust of Queen Victoria. They could contemplate, with fascination and disbelief, the country we once imagined ourselves to have.