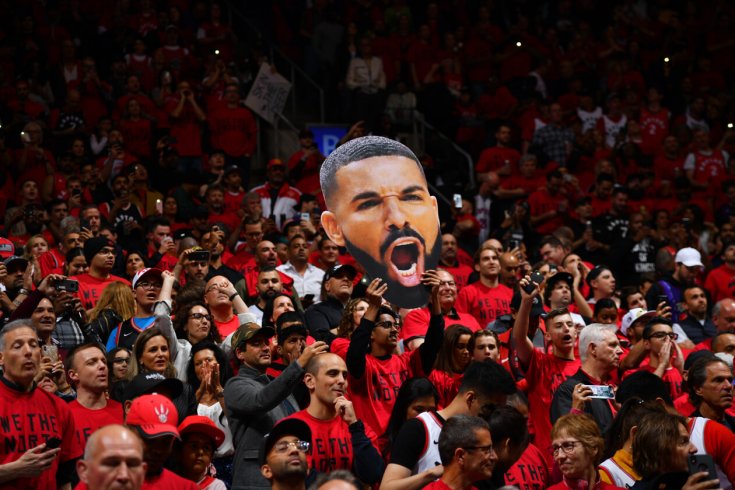 For the first time in franchise history, this year, the Toronto Raptors won the Eastern Conference Finals and ascended to the NBA championship finals. During most of the games since, Drake, the famous Toronto rapper, singer, and pop icon, has been courtside, acting like part of the team. His gregarious fandom has seen him jumping out of his seat to heckle the players and even giving an unsolicited shoulder massage to the Raptors head coach. Because of Drake’s presence on the courts—more like an immoderate mascot than a global ambassador (his official title since 2013)—he and the Raptors are now woven together so tightly that the team can hardly exist in popular culture without the man, and vice versa.

This development has polarized his fan base: some revere him on his home turf, where Raptors fans have brought giant cardboard cutouts of his face to games, but he’s perceived as a symbol of poor sportsmanship and etiquette practically everywhere else. Courtside ticket holders are meant to cheer and heckle, like anyone else in the stands, and to be conscious that their physical presence is precarious to gameplay—there should be no interference. In a press conference on May 22, the Milwaukee Bucks’ head coach said that basketball court was no place for Drake. Smash Mouth, the popular ’90s band, later tweeted at Drake, suggesting his courtside antics during the playoffs were unwelcome. Golden State Warrior player Klay Thompson later said he likes Drake the musician, but Drake the basketball fan? No, thank you. Even former US president Barack Obama, who was at game two of the finals in Toronto last week, seemed to tease Drake about behaving himself when they bumped into each other. But Drake is also being rewarded for these so-called antics. On Queen Street West in downtown Toronto, a new mural paying tribute to the Raptors’ starting lineup also features an image of Drake’s now infamous shoulder rub.

It has been quite a year for Drake. (Admittedly, every year is probably a good year for him.) Last summer, his fifth studio album, Scorpion, broke all kinds of streaming records. This May, he won twelve Billboard Music Awards in a single night, bringing his total up to twenty-seven, the highest of any artist in BBMA history. He completed two tours to support Scorpion: a several-month tour in North America and a shorter stint in Europe, which included seven nights at the O2 arena in London. He’s an executive producer of a new HBO series, Euphoria. And he’s partnered with a cargo-jet company—he revealed a video of his very own private jet on Instagram.

When celebrities reach a certain tier of success, everyone feels qualified to question their position. For Drake, this manifests as a relentless dissection of his character. Fans, critics, anyone who has an internet connection and an opinion, can argue endlessly about which Drake record is the best, whether Drake peaked ages ago, and whether he belongs in a Raptors game now or if he ever did. And, especially in the last year, they have been complaining there is just too much Drake. Scorpion, with twenty-five tracks, was too much content, some fans said, boring and unoriginal. Now, during the postseason, he has become, to many, the rotted root of an otherwise entertaining sports affair. Drake the celebrity, the meme, has eclipsed Drake the musician. He is an easy target for praise and condemnation: applauded for arguably pulling an entire city into the spotlight but criticized for being too smug in his fame. As Lindsay Zoladz wrote for the sports-and-pop-culture website the Ringer, he is “the home team and the away team, the alpha and the omega; he’s the grinning golden boy pumping his fist like an underdog.”

Social media—an impatient, unforgiving space—invites users to criticize or acclaim an artist immediately and without context. It’s menial, this obsessive dissection of someone, but this is what pop culture has become. Drake seems to be aware of what people say and think about him. When he released Scorpion, the Apple Music editor’s note included in the album quipped, “Drake didn’t start from the bottom” and “Anybody else > Drake… Yeah yeah we know” He is always listening in the background, the product of a world where no one can stop paying attention. And, in that sense, Drake is a genius at being both revered and vilified: he seems to understand and thrive off of the relationship between celebrity, the internet, and a capricious public. Perhaps this recent manifestation of the public’s relationship with Drake is more intentional than we’d like to give him credit for. His domination of the headlines during the NBA playoffs—during which people will crane their necks to catch a glimpse of him courtside, then hop online to criticize him—is a striking example of a more meaningful truth: Drake’s brand has become exactly what his fans, followers, and critics want it to be—that of a willing and successful pop-cultural antihero.

Since Drake’s rise from teen star on Degrassi: The Next Generation to rapper, we’ve watched one of Canada’s very own dominate the charts. From the start, he has been a cultural meteor burning through the atmosphere. And, despite criticism, Scorpion proved to be a wildly successful commercial endeavour: it reached 1 billion streams in the first week. In other words, Drake was—and still is—very good at his job. Creative success, though, has always been both a blessing and a curse: experience and time allow for innovation, but fans are often hungry for more of precisely the same as before.

The critic Jon Caramanica once wrote in a New York Times essay about Drake that online fandom isn’t simply an act of reception; there is an interaction between the fan and the artist that lends itself to recontextualization. “For the celebrity, it’s about…letting the hive take control,” he wrote.

Fans project onto their chosen celebrity whatever they need, creating a relationship with an image or symbol of that person—either positive or negative. This relationship can make fans vicious, taking a “ride or die” or “stan” approach to fandom. That is much truer in 2019 than when Caramanica wrote about fan culture in 2015. Last year, Nicki Minaj fans, called “Barbies,” attacked a Toronto journalist for a fairly innocuous comment about Minaj’s music on Twitter; Minaj herself even chimed in, and the incident culminated with the journalist losing her position at an entertainment blog. Supposedly, when Lady Gaga’s fans, her “Little Monsters,” found out that the movie Venom was slated for release the same day as A Star Is Born, in which the pop star plays her first feature role, they churned out negative reviews of Venom. The public does this. We do this. Celebrities have allowed this. It’s not private or inconsequential simply because it exists online. We control how conversations move, often affecting real lives, celebrity or otherwise.

Drake embraces this reality by agreeing to be anything to everyone. He doesn’t have much of a choice: his face is an everyday commodity. Online, it is its own language. Variations of his expressions (Sad Drake, for example, showing his frowning face with a small tear falling down his cheek) are used as memes to convey a feeling, sentiment, or thought. At one point, you could download an app to add to your keyboard with predetermined Drake lyrics to send depending on your mood—often lustful or sulky.

When this iteration of celebrity culture occurs, when the public takes hold of your very face to support, bolster, or achieve a reaction, your agency is lost. The public not only controls the perception of you, they seek to control you, to determine how you act. With Drake, that relationship becomes the possibility of infinite content. We want to make him into a true pop-culture product, an animated image that depicts precisely what we want to exhibit without saying a word. We want a Drake to be moody for when we are. We want a charged-up, vengeful Drake when it suits us. A happy Drake for when we feel the need. We want a Drake that allows us to believe all of those personas and versions can exist in one human, the ultimate celebrity, for us to love and hate whenever we need something to love or hate.

Public control of celebrity in this way is not a new idea. But stardom today feels more tangible and unpredictable than ever before. And the public’s perception of access has been altered: fans don’t want to simply watch, they want to participate. This is, we’re told, the precise thing that occurs when you are a celebrity—you belong to the public. You are in a privileged position, and any of our vitriol simply pings off of your millions, or billions, of dollars. None of this says anything good about us. It lays bare our manipulation of content to reduce a person to an object or feeling. This attitude is a cannibalization of celebrity the public rarely acknowledges. The consequences seem so small. But to constantly demand that someone reconfigure themselves into a form we are comfortable with can be an overwhelming request.

In an impromptu media scrum—an uncommon occurrence—after the Raptors stunningly defeated the Bucks in game five of the semifinals, Drake excitedly said he loved Toronto and loudly praised the passion of Toronto’s fan base. The video was widely shared. People in the city echo Drake’s excitement. They yell in the streets as if to say, “It’s our time!”; they wear Raptors gear to work the next day.

Drake arguably positions himself at the level of an everyday fan cheering in the streets. Torontonians love that about him. Yet most regular fans would never be subjected to the same sort of vigorous, and at times cruel, criticism—nor would they reign over Jurassic Park (the space outside Scotiabank Arena where fans can gather to watch games in the postseason). Drake has ascended far higher than the status of a successful rapper from Toronto. He is now in a special stratosphere of celebrity reserved for the most famous, one where we constantly demand more of him to consume—a public appetite that no pop star can adequately satiate. Because when we actually get more—when Drake gives us a record with twenty-five songs featuring private confession and sonic evolution or sincere basketball fandom, representing an entire city—it is too much for us. We want Drake to allow enough space for us to project our own feelings and desires. So criticism of Drake is always one sided. Whether it’s the head coach of a NBA team or an anonymous person online, it is always Drake versus someone or everyone versus Drake.

Sarah MacDonald is a writer and editor living in Toronto. Her writing has appeared in Noisey, Now, Fashion, and the National Post.