Does Andrew Scheer Have What It Takes to Be Prime Minister? | The Walrus
Skip to content 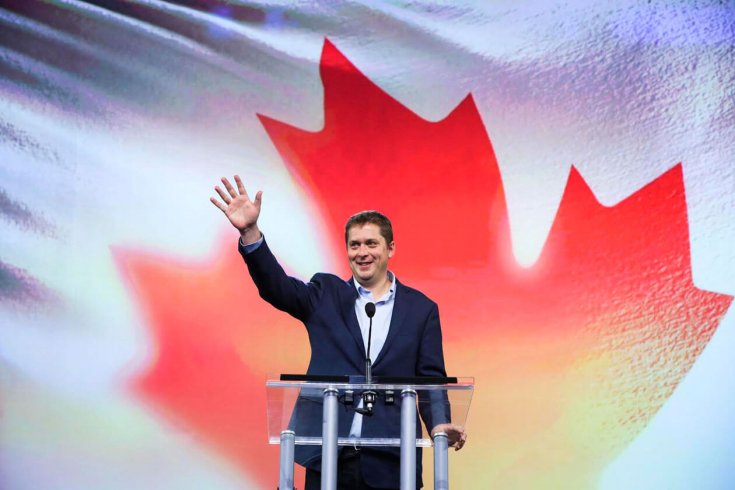 It’s a curious time to be a Tory. The most successful conservative movements, of late, have tilted hard to populism, eschewing normal deficit-fighting orthodoxy and good government for lowest-common-denominator symbolism and the demonization of immigrants.

For some of those conservative parties around the world, the populist slide was the result of an existential crisis. Facing challenges from their right flank, they found themselves either fending off xenophobic challengers or being consumed by them. Theresa May’s Conservative Party is being splintered by UKIP-emboldened figures like Boris Johnson. Italy’s traditional centre-right coalition found itself fighting, then co-operating with, and eventually superseded by a gang of ardent xenophobes. Australia has seen growing support for anti-Islamic political formations, which are eating into support for the governing conservatives, who just abruptly turfed their leader, the prime minister.

To date, the challenges of these global movements have had little in common with those of Canada’s Conservative Party, a big-tent movement of rural ranchers, moneyed technocrats, francophone nationalists, social conservatives, and liberal traditionalists. While a soul-searching leadership race, last year, led the party to some odd dark corners of that tent, it emerged largely unchanged from the party it had been during a decade in government. But if the recent Conservative Party convention in Halifax is any indication, things appear to be changing.

Political conventions are relatively scripted pageants. You get impassioned debates on arcane policy resolutions. You get speeches that walk the careful line between firing up the room, earning a spot on the evening news, and introducing little of import or note. And you get hospitality suites that ensure that what is said among delegates stays among delegates. Political conventions are rah-rah affairs designed to garner good press, energize the rank and file, and introduce the party to a strategically important city.

But the Halifax event was a different beast. Just hours into the first day of the conference, Maxime Bernier—member of parliament for the Quebec riding of Beauce—announced he would be quitting the party and forming his own.

It can’t have been lost on Bernier that the timing of his exit would be significant. Ever since his second-place finish behind current leader Andrew Scheer, in May 2017, he has tried to remake the party in his likeness, with little success. Years ago, Bernier became virtually the only national politician to come out hard against supply management, Canada’s collectivist system of tariffs and quotas for dairy, eggs, and chicken. From there, he has launched on crusades against corporate welfare and, more recently, immigration. After his own party rebuked him on the latter issue, he announced he would be quitting altogether.

Scheer did his best to steady himself following Bernier’s announcement—the National Post reported that the leader had been aware of the impending mutiny for a few days. But it was impossible to ignore Bernier’s looming presence over the whole weekend, even if his ideas didn’t actually fare too well. A motion to dismantle supply management, a particular bugbear for Bernier, never came to a vote. Briefing documents for a dairy-lobby group, discarded on the floor, claimed that this may have been due to some backroom organizing from the party itself (Scheer’s office, according to the Globe and Mail, denied this, saying the briefing contained false information, and the dairy lobby subsequently apologized). A motion that took aim at “compelled speech” around “made-up” gender-neutral pronouns was voted down handily. The main immigration policies, mostly around stiffening the United States and Canada’s Safe Third Country Agreement, that came to the floor of the convention were mild in comparison to Bernier’s recent obsession with “extreme multiculturalism.” Even a well-organized effort to strike down the party’s abortion policy—that members would never introduce legislation to restrict access to the procedure—was defeated on the floor.

The only real evidence of Bernier’s supposed well of support were the few attendees telling anyone who would listen about the importance of ending supply management for dairy and eggs—it is a “litmus test” for the federal conservatism, one said. Some of those who spoke vowed to leave the party.

Bernier’s support, it’s clear, will not come from the delegates who flew to Halifax, the true blue Tories. But he will have a hefty impact on the party they belong to, especially given the interest he appears to be generating among nonconservatives. Early polling suggests he’d shave five points from Scheer’s party, yes, but three points from Trudeau’s Liberals and two points from Jagmeet Singh’s NDP. He may find a path to further success the same way Donald Trump did, through nonvoters and the politically nihilistic.

For months, conservative commentators have promised that xenophobia won’t take off in Canada. And they may yet be right. But there were little moments that popped up in Halifax that suggested Scheer may be feeling out some territory to his right. The party membership voted to recognize environmental policies as a strictly provincial concern—endorsing the idea that Ottawa should never price carbon or use “penalties or incentives” to combat climate change. They also voted to support an end to birthright citizenship, the policy—around since the Canadian Citizenship Act was passed in 1946—that automatically renders anyone born on Canadian soil a Canadian citizen. That last vote will be subject of much scrutiny over the coming months, as the party decides whether it wants to toss out its immigration playbook for a decidedly harsher tone and endorse a resolution that could create stateless babies. (Scheer has already tried to downplay that vote, saying he will merely “safeguard” birthright citizenship against abuse.)

Scheer used the mainstage to reintroduce himself. The hype squad started with a video address by ex–Saskatchewan premier Brad Wall. Soon came Richard Martel, a popular hockey coach who won an upset in the Quebec riding of Chicoutimi—Le Fjord. He promised that Conservatives could romp to victory “coast to coast to coast,” with a few cautionary words: “Only if we stick together.” Then was hometown boy Peter MacKay with a thundering speech—one that would overshadow Scheer’s own, obviously highlighting that the job may be MacKay’s in a matter of years.

Scheer speech itself was a hodgepodge. There were no references, direct or oblique, to his former leadership rival. There was relatively scant mention of immigration. There was a whole tangent that tried to rehabilitate the political legacy of John A. Macdonald, with little success. He never quite managed to rile up the audience with any consistency but found most success when he played the hits: pipelines, deficit reduction, free trade. All the classics.

Scheer understands that one of the important factions within the party is Tories in favour of sensible fiscal policies and moderate social ones—or, at least, Tories who are happy to compromise in favour of polices needed to to win government. Stephen Harper, for all his purported radicalism, made sure that antiabortionists and more hardline conservatives rarely dominated the narrative or tried to highjack the agenda. A sense of purpose helped keep Harper’s party heading in a single direction. Scheer, meanwhile, has spent his tenure as leadership contender and, subsequently, leader on shakier ground. The Halifax affair was, at least some Tories hoped, to be Scheer’s coming out, his chance to chart a course for what the conservatives would stand for. While Scheer’s caucus was unified around him, Scheer didn’t come away from the weekend looking like he had a clear idea on where to sail his party.

A prime example: the Globe and Mail reported that Hamish Marshall, Scheer’s campaign manager, was seen cavorting with the far-right media personalities from the Rebel, who had been banned from the premises for the weekend—and who had set up shop on a bar patio just outside. Tories spun this as something negligible, but given that Marshall worked for years alongside staff at the Rebel, a platform that has hosted white nationalists, and given the far-right website had gone on a full-frontal attack against the party for their ban, the optics were quite bad.

Scheer’s team didn’t help things. He scheduled interviews with an array of outlets, only to cancel—the Globe, according to Laura Stone, had its interview cancelled after the Rebel affair, while the Toronto Star had its request simply ignored.

The end result was a weekend all about Bernier, and Scheer proved himself incapable of changing that. Bernier accused the party of being beholden to dairy-lobby groups on supply management, and that charge is mostly true. But he also attacked Scheer for abandoning primary conservative beliefs, having been co-opted by some mushy liberal thinking on immigration and culture—an accusation that is bizarre and disconcerting, but which may nevertheless prove popular with many in Canada.

There’s a real chance Scheer will become the next prime minister, if Bernier fails in zapping Scheer’s momentum or if Scheer manages to use Bernier as a convenient right-wing marker to define himself against. Perhaps Scheer has some political acumen that he’s successfully hidden thus far. It’s possible.

And, so long as that’s possible, Scheer needs to decide what kind of prime minister he wants to be. Continuing to define himself against pricing carbon or removing statues and as a man set on demonizing border-queue jumpers, Scheer will create an ever-smaller box he’ll be forced to live inside if he does come out on top in 2019. Offering policies that appeal to Canadians’ more positive sensibilities seems a more proven path to victory.

Just a day after the convention wrapped, an Abacus Data poll put Bernier’s hypothetical new party at 13 percent nationally, ensuring his continued relevance well into the future. It’s almost certain he’ll pick up seats, meaning he may yet attract viable candidates, and it will become likely he’ll be included in the next leaders’ debates.

A lot more goes into creating a party than just announcing you plan to create one—Bernier hasn’t even picked out a name yet. But the polling is proof positive that he’ll be a force in the next election—unless Scheer can exorcise him.