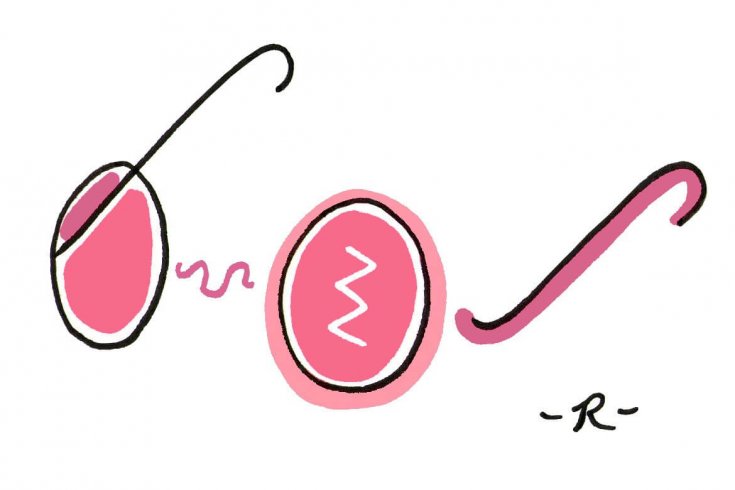 Mom pushed me to Joey’s headstone. Then she dropped herself like a garbage bag and started bawling.

I wheeled around a bit. Cemeteries are depressing. Some of the grave names are hilarious. Adolph Lipshitz. I actually laughed.

Ten minutes later, it takes her that long to drain, I wheeled back. Mom was standing up.

“Do you want to say something?”

“You didn’t even bring your flower.”

“Ma. I’m sorry. I know how much he loved plastic flowers from the dollar store.”

Mom dropped her head like an axe. Then she picked it up slowly and said slowly:

She looked at me.

I glanced at his headstone. Joey Mirolla—Happy at Last.

I looked up. I searched for the cloud that resembled a normal family.

Joey had rose-tinted glasses but it was for an eye condition. Mom sent him every summer to Camp Fun-Away for Bettering Young Men. Camp Faraway for Bitter Young Men, my brother called it. He came back sunburned and skinny as a French fry, every time. He wouldn’t say a word for days, except shit or fuck.

He’s at Camp Faraway. He’s still bitter, so they won’t send him home. Not yet.

If you can see through bullshit, you won’t have a long life.

Most nights, we shared a room, I climbed into Joey’s bed with the clock radio. We pulled the covers over our heads, listened to rock and talked for hours and hours. All night, sometimes. Mom took Quaaludes.

The radio had a dim light on the dial. It lit up Joey’s pink lenses. In the dark, they were all I could see.

If a song came on we both loved, we punched each other. We had to explain that to the social worker.

I was sore and tired one time, it was almost four, so I said goodnight. Joey grabbed my wrist.

It was “Dangerous Thing” by the Jumptones. Joey punched me. I punched him back. It was a great song. Our favourite.

The pink lenses pointed at me.

“The most dangerous thing on Earth is a bored intellectual.”

I didn’t understand what my brother meant. Not yet.

My brother and Mom loved tradition so they killed each other every morning, just about. Mom grounded Joey every day. When he wouldn’t go to our cousin’s birthday because extended family was a terminal illness in his opinion, Mom grounded him for a week. That suited Joey fine; he was a home body. Unfortunately, so was Mom. Most people stared at our house when they walked by.

I remember—Mom wanted to cut Joey’s hair the one day but he said no, he’d get too much masochistic pleasure out of it.

Vinn De Bona was a local guy who killed people in the ’60s.

Mom followed Joey around the house with scissors until he flipped out. He flipped the couch over and the armchair and went upstairs, swearing. When I looked out the window, I saw a dozen people in the street, looking back.

I don’t know if Joey heard her.

It was a tough month. I thought for sure Joey would kill Mom or she’d kill him. When she lectured him about slouching, I had to jump him. I hid the scissors.

I came home from school once and Mom was sitting under the kitchen table, opening a pill bottle. The chairs were missing. But then I noticed them on the basement floor, in pieces.

“What should we have for supper?” Mom said.

“Set the table,” she said, crawling out.

Every dawn at Camp Faraway, you take a long, cold shower. Then they put you to work sewing wallets, leather wallets, for rich old guys. Rich old guys like wallets made by slave labor because it reminds them of the good old days. And the wallets smell like boys—a plus.

Once you’ve sewn your quota, it’ll be dark by then, they lock you in your room with a Bible. You can read as much as you want and jerk off.

In the morning, it all starts over.

Joey came home from school one day in rough shape. He turned his face but I saw the fist marks in the blood. He put the pieces of his glasses in the kitchen sink.

“You know what?” he said that night, under the covers.

Without his glasses, I could see his eyes glowing.

I would’ve punched him, normally. Not that night.

“When you don’t think like other people, you disappear. You’re the ghost no one believes in.”

I didn’t ask my brother what he meant because I was trying to figure it out.

Joey turned the dial to static. He left it there.

We listened to static for an hour.

I felt scared to death for my brother.

Once a month at Faraway, so no one gets homoerotic, they have a dance night. The girls from Camp Nun-Time for Wayward Girls row across the lake. Everyone assembles in the Living with Purpose Room. You pick a girl or a girl picks you. You talk for a minute then waltz for three hours. You can only waltz with the one girl, even if you realize pretty fast you can’t stand each other. If you try to sit down, they hook you back together.

If you don’t drop dead, you get fruit punch.

The last time Joey came home from camp, he was smiling. He and Mom laughed as they dragged his stuff in.

For dinner, Mom made ravioli—Joey’s favorite. She didn’t scream and he didn’t say anything negative. We played canasta.

After my brother went upstairs, Mom squeezed my hands. She teared up.

Something fell in my stomach but I wasn’t sure why or what.

When I climbed into his bed that night, Joey didn’t sit up. He didn’t roll over. I listened to a few songs, then turned the radio off.

We never listened to music again.

After two months at Camp Faraway, you’re re-evaluated. They’ll inform you if you’re Cured, Quasi-Cured, or Still Fucked. A big dude with a tattoo gun will needle C or QC or SF on your forearm.

If you’re Cured you can leave for good. They’ll give you back your street clothes but if you had a rock shirt they’ll burn it and give you one with Jesus drinking milk.

Quasis can go home if they sign a document promising to come back in a year. Under penalty of castration.

SFs can’t leave. They strip down and start the whole process again. They can end up spending months at the camp or years.

I still pull the covers over my head, sometimes.

I like slower songs now, sad songs. They’re depressing but . . . When I hear them, I don’t feel worse.

If “Dangerous Thing” comes on, I turn the radio off.

When the school reopened . . .

Everyone looked at me. They licked their eyeballs and stuck them on me.

When I wheeled into the hallway, a wave of eyeballs swept me away.

I grabbed onto my locker door. And waited for the wave to pass.

Then I saw the hole in the door. The bullet hole.

I started wheeling backwards. Away from the grave, down the path. Out of the cemetery. Across the street.

When I hit the curb, my chair tipped. I knocked my head on concrete.

Mom caught up. She dropped down beside me, sobbing.

She hugged me. Her tears trickled into my ear.

A few people stood around, watching.

I watched the clouds go by.

I searched for that normal family.

I saw a beached whale and ravens eating a deer.

I guess that’s as good as it gets.