Coming Back from Hell | The Walrus
Skip to content 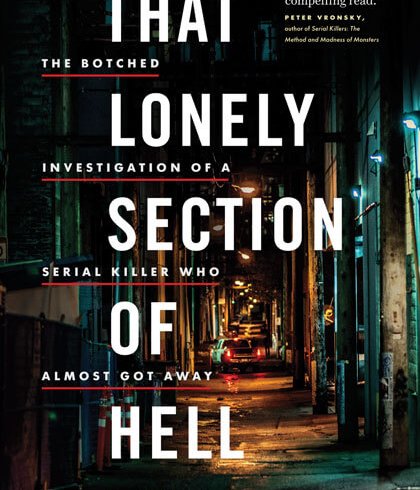 Book jacket for That Lonely Section of Hell

In July 1998, detective Lori Shenher was assigned to investigate the growing number of missing women who lived and worked on Vancouver’s Downtown Eastside. Her second day on the job, she received a Crime Stoppers tip that suggested Port Coquitlam pig farmer Robert “Willie” Pickton may be responsible for the disappearances. However, it took until February 2002 for an unrelated search of Pickton’s farm to turn up the evidence that eventually lead to his alleged confession (of having killed forty-nine women) and conviction (for six of those murders).

During those four long years, Shenher struggled to work a demoralizing case despite a significant lack of resources, frustrated with the failures and apparent indifference of the system that surrounded her. She often felt like an imposter within cop culture—a left-of-centre queer woman who dared to question an institution that was so obviously failing the people it intended to serve. According to Shenher, the default position of department brass was that these missing women, many of whom were sex workers and had issues with drug use, had put themselves in harm’s way; while police would do what they could, they certainly wouldn’t throw the same time and attention at the case that they would for one involving more “legitimate” victims.

“I just don’t understand that. I still don’t.”

Shenher is on the phone with me, early in the morning, alone in her car parked outside her Burnaby home—a quiet place to get away from the first-day-of-school preparations that are happening with her partner and children inside. Her life is different now; she’s currently on medical leave for post-traumatic stress disorder, unsure if she’ll ever return to policing. The botched investigation, and what she now refers to as “the avoidable deaths” that occurred after that initial tip, have all contributed not only to Shenher’s diagnosis, but to an uncertainty of her being able to work under those kinds of conditions in the future.

“I think buried really deep in the experience was a need to try and make it have some meaning, and to have some lasting effect as far as not having police, or victims, or families to go through the same thing again,” she tells me. “It seemed so easy to me to see this happen again.”

Shenher has written a candid memoir detailing her experiences on the Pickton case. That Lonely Section of Hell (excerpted in the October 2015 issue of The Walrus) is actually her second attempt at documenting the glaring mismanagement that ultimately made her sick, and drove her away from policing—the first a 2002 scrapped manuscript that she didn’t feel ready to put into the world.

“As I’ve worked through (PTSD), I understand that a lot of my irrational fears were unfounded. But could I have stood on the rooftops and shouted what was happening there? Now, fifteen years later, I don’t feel like that was a viable option,” she says. “I’ve worked really hard to prepare myself for the [book] release, and for doing interviews like this, because it still triggers me for sure. I think I’m going to be able to manage it.”

Hell as it exists now is vastly different than her first attempt, the result of Shenher becoming more comfortable revealing the very personal toll the police mishandling of the case took on her. The one doubt she maintains is being wrongly perceived as using the tragedy for her own gain—yet still she feels obligated to use her voice to improve the system, and the plight of both victims and individuals like herself.

“The genesis of the book was two-fold. On the one hand I felt so compelled that this was a story that had to be told in terms of the procedural side of it and everything that went wrong,” she says. “But I also felt such a strong compulsion to tell it because I just had to make sense of what happened. Not to absolve myself of any responsibility, but to try to put it in the right place in the context of my trauma.”

Shenher rightly resists the idea that That Lonely Section of Hell is a traditional true crime book, knowing that kind of positioning has the potential to be sensationalist or gratuitous. (She was even reluctant to let readers inside the Pickton interrogation, feeling like there was something “dirty” about that kind of potentially voyeuristic access.) Her clear intent is to honour Pickton’s victims the best she can, by telling their stories without ever speaking on their behalf. “I wanted to make sure and was very mindful of not divulging anything that was told to me in confidence that hasn’t been in the public domain,” she says. “I wanted to be very respectful of their privacy in that way—that was really my overarching guide. “

To this aim, Shenher deliberately omits many of the horrifying (though widely publicized) details of Pickton’s crimes, rightly making the story more about the women, their dignity, and their experiences, than the now-mythologized villain who invaded the Canadian consciousness. The book is additionally peppered with letters to the victims and their families, revealing Shenher’s fallibility and regret throughout. (“We share that sense of trying so hard to advocate on behalf of all of you and failing so miserably to have made any kind of difference or save any of you from this horrific end...”) These correspondences seem to represent an apology where the detective knows one is impossible, and to underscore the feeling of helplessness that plagued her for so many years.

The true revelation of this book is not, in fact, police mismanagement, or the myriad institutional failures that allowed Pickton to go free for so long—sadly those things almost seem like a given, failures we’ve seen over and over in terms of the inherent racism and sexism that exist in police departments all over North America. (There are definite echoes of the Paul Bernardo case here: a serial rapist and killer who was allowed to continue his crimes, despite being interviewed by police years before his arrest and conviction.) Instead the real eye-opener is Shenher’s admirable transparency about how she unravelled in the face of continued injustice for these vulnerable women. It’s a story rarely acknowledged in mainstream PTSD narratives—usually reserved for those who have endured military combat—the stigma and shame too great for those diagnosed to tell their truths.

“It’s so bizarre that the police and first responders in this country [don’t have the resources they need]—I mean the whole job is about trauma, and yet they have nothing in place and don’t even recognize it other than from a liability issue. They’re not looking at it as anything more than ‘how can we cover ourselves.’ The Vancouver police have not been receptive at all.” Shenher adds that when she was trying to get back to work, she offered to be an ombudsperson for people struggling with trauma, an advocate to help people get the right treatment, and that the Vancouver Police Department had no interest whatsoever. “There’s still stigma . . . There’s an assumption in those fields that only people who are extra super tough will make it. That they shouldn’t have been there in the first place.”

That Lonely Section of Hell depicts the author’s personal experience with PTSD so candidly and generously that the book actually offers a real sense of comfort for those struggling with recovery. Shenher holds nothing back when writing about her searing self-doubt, agitation, obsessive behaviors, panic attacks—even her irrational urge to put a bullet in an office photocopier when the strain and frustration became unbearable.

“(PTSD) is almost like you’re inside yourself and then you’re standing outside yourself. And you’re just going, ‘What is wrong with me? ’ The challenge with PTSD is you have so many healthy and normal moments that it makes the times when you’re seeing your symptoms stranger because you can’t reconcile those two things.”

In her recollections, Shenher often chastises herself for her own suffering, thinking herself weak because, in her view, nothing bad really happened to her, that certainly people have experienced so much worse and handled it so much better. It is a kind of self-punishment that will be familiar to many of those who suffer with trauma, especially outside the context of war.

For Shenher, the institutional and community support that people get when they come out of traumatic experiences make all the difference in terms of how well they will heal and survive. The lack of institutional justice, the victim-blaming and shaming, the failure to recognize and treat suffering, all coalesce into a perfect storm for a PTSD diagnosis. Beyond all else, this book acts as a call to action to support those who have both endured and seen horrific things, but may not fall into the kinds of categories that we generally associate with the condition.

I ask Shenher if she has any residual fears about the book’s release, the damning revelations it contains, and the intimate personal details it discloses. “I got to a point in my life where it wasn’t healthy for me to be worried about that. I just couldn’t anymore,” she tells me.

“I feel like I’m in the least fearful place I’ve ever been.”