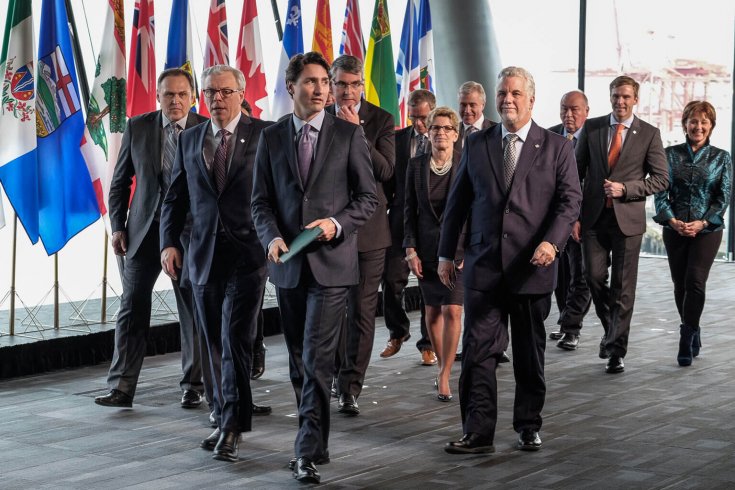 On the Vancouver Convention Centre ballroom stage at Globe 2016 Thursday afternoon, the premiers were arranged—intentionally or not—in geographical order. Alberta premier Rachel Notley sat at the audience’s furthest left, Quebec premier Philippe Couillard at their furthest right, with Manitoba premier Greg Selinger and Ontario premier Kathleen Wynne in between. Alberta, Manitoba, Ontario, Quebec: four of the six provinces that have already put a price on carbon or stated their intention to do so. (The other two are British Columbia and Newfoundland and Labrador.) Tidy.

The premiers had come to this “armchair dialogue”—they were indeed seated in armchairs—directly from the first ministers’ meeting, where every other first minister in the country had agreed to put a price of one sort or another on greenhouse gas emissions. The specifics of how they intended to do so, however, were put off until the fall. This was to allow time for a handful of working groups to investigate what would work best for the remaining provinces—and perhaps more importantly would allow time for Saskatchewan premier Brad Wall to stand for re-election. (Wall’s misgivings, which cited the crippling costs a carbon tax would allegedly impose on his province, and which included many zeroes but no sources, were the sourest notes sounded ahead of the conference.)

I’d spent the half-hour before the armchair dialogue scrolling through Twitter, where several of the Ottawa commentariat’s usual suspects had summarily decided the first ministers’ meeting’s Vancouver Declaration was an abject failure. The Globe and Mail’s John Ibbitson lamented “another year lost.” Vice’s Justin Ling said he was sure Justin Trudeau “substantively, hasn’t” achieved anything on the file. Sun Media’s David Akin was nearly as sure some significant portion of the people who elected the Liberals in October were regretting their votes. None, in my humble opinion, covers climate policy with anything like rigour. Or does so, you know, substantively.

Indeed, if you need a rough measure of the neglect the Ottawa press has generally given to climate policy, you could use the comparative reactions of parliamentary press gallery regulars, hardcore climate wonks, and sustainable business types in the audience at Globe. If you wanted to be catty about it, you could note that none of the reporters documenting Trudeau’s supposed failure thought to survey the Globe audience for comment or mood. Which, to be really catty, would be a bit like covering a military funding announcement and not bothering to talk to anyone who’d ever worn a uniform before deciding what it meant to the military, even though there was a ginormous military exercise going on across town. (Credit where due, though: Bruce Cheadle of the Canadian Press filed a thoughtful analysis of the Vancouver Declaration.)

Relative to the general mood at Globe otherwise, the reaction to the supposed policy failure represented by the fact that the carbon pricing regime promised by the Liberals in their campaign would not be delivered in full for another six months was a collective shrug.

This is not to say the folks at Globe don’t care about carbon pricing, but rather compared to the state of the national discussion about carbon pricing until very recently, so much ground had already been covered that it didn’t matter so very much that the final details would require a bit more politicking.

On stage at Globe’s armchair dialogue, Quebec’s Couillard noted that 86 percent of Canadians now live and work in a jurisdiction subject to a price on carbon. Strangely, he was not shouted down as he did so for carrying the prime minister’s water on the subject. Prominent environmental activist Tzeporah Berman pointed out in a tweet that this might have been the first time ever anywhere on earth that the heads of state of four carbon-priced jurisdictions had chatted amiably in this way. (It was a first for Canada, in any case.) On the same stage that morning, Berman had pointedly challenged the natural gas math of the semi-deified Harvard economist Michael Porter to his face, so I have to assume her unwillingness to lament the state of Canadian carbon pricing wasn’t born of insufficient nerve.

At another point in the discussion, Couillard said, “The fact that the meeting happened itself is part of the success.” Not long after, Notley brought up a phrase once frequently heard in Parliament—“job-killing carbon tax”—and said, “I reject it out of hand.” By which she meant the adjective, not the compound noun. Neither was so rude as to further explain that the first ministers never met en masse with Prime Minister Stephen Harper on any subject after 2009. Or that the only time Harper and his Conservative colleagues ever mentioned carbon pricing at all was to warn all and sundry of its horrifying ability to murder employment. But I am.

And they certainly weren’t so impolitic as to say anything about how the nation’s political pundits, now so concerned with what Trudeau substantively hadn’t managed to accomplish on carbon pricing, had very rarely bothered, when Harper was calling the shots, to interrogate the phrase “job-killing carbon tax” even far enough to note that British Columbia’s version of said tax had done no such thing. But I certainly am.

Anyway, yes, if you heard about the progress made this week on carbon pricing, it likely came bracketed by all manner of furrowed parliamentary press gallery brows and near zero context.

Meanwhile, back on stage at Globe, the premiers continued to chat amiably. They continued, in fact, to insist—without contradicting each other even once—that there was a level of resolve on carbon pricing and climate policy generally without precedent in recent years. Notley said she had detected a “clear consensus” among the first ministers about taking real action on climate change. Wynne said her government had already mostly finished writing Ontario’s new cap-and-trade legislation. It went on like this.

Not that the armchair dialogue was a model of unrestrained straight talk. There were certainly some things the premiers refused to say, and that the moderator, Allan Gregg, was certainly not rude enough to insist they address. And these unaddressed topics were very much the sorts of topics upon which a broad climate agreement could stumble. No mention of pipelines, for example, and not a single use of the term “oil sands,” though the building of the former to carry the latter has become a crude (heh) shorthand in some circles for the larger national discussion about carbon prices and greenhouse gases and everything else under the globally warming sun.

I’ll come back to the way the pipeline question stalked every conversation at Globe in my next dispatch. What was notable, though, was the degree to which none of the premiers on stage wanted to get into it. Notley, in particular, dictated an ersatz thesaurus entry in order to keep the topic off-stage. She spoke of “our product” and “those resources” and “the production and the export of non-renewable energy.” Couillard, cast of late as an enemy of bitumen-bearing pipelines, was at least willing to refer to Canada as “an important producer of fossil fuels.”

Mostly, though, the wearied premiers wanted to talk about what they agreed on. Which—in case it’s somehow remained unclear—was putting a price on carbon. And working with the federal government to take the kind of coordinated and meaningful action on climate change that had been beyond imagination during the Harper years. And getting some things done. Finally.

A roomful of people who focus on climate change for a living heartily applauded them for their efforts. The overall mood remained buoyant. Still amazed we had come this far, this fast, I’d wager. And I’m worried this is not what you’ll hear from the nation’s political press about climate policy in the months to come.

Mostly, though, I too am feeling buoyant. If there is not a price on carbon from sea to sea to sea by year’s end, feel free to call me on it. I’m reasonably confident you won’t be able to.