Ask a Hockey Expert: Will a Canadian Team Ever Win the Stanley Cup Again? | The Walrus
Skip to content 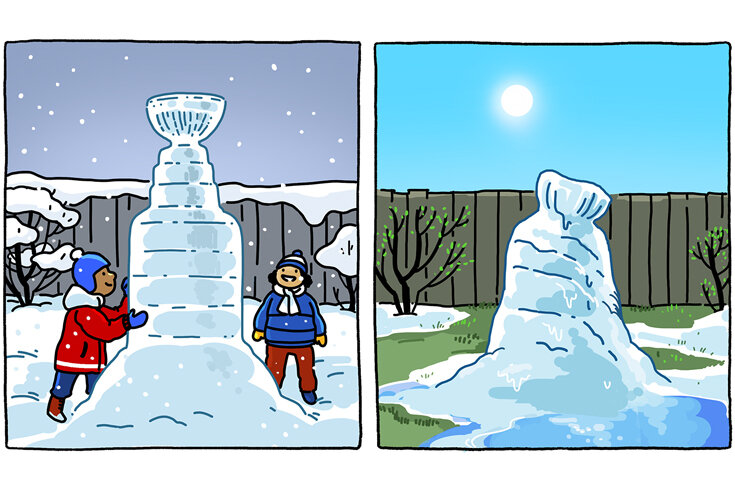 Hockey is hailed as Canada’s sport, yet no Canadian team has won the Stanley Cup since the Montreal Canadiens’ victory over the Los Angeles Kings in 1993. We asked William Foster, a professor at the University of Alberta whose research interests include the management and performance of professional hockey teams, what it would take to end the nearly three-decade dry spell.

Canada is having its longest losing streak in the 104-year history of the NHL.1 Are Canadian hockey teams getting worse?
A Canadian team did make it to the finals for three consecutive years between 2004 and 2007, and again last season. The league-wide salary cap, which was introduced in 2005, helped with that. In the years prior, teams with higher revenues—many of which were American—could spend more on salaries, meaning they could sign all of the top players. During that time, Canadian teams wouldn’t even make it into the playoffs. Now, they regularly do. But the salary cap still isn’t particularly useful if you’ve got bad team management—as the Ottawa Senators have been criticized for—or can’t procure the right players.

Canadian teams that have managed to acquire some of the best players in the league still haven’t been able to win. Why?
There are certain sports, like basketball, where a single player can have a significant impact on team performance. In the NBA, players can stay on the court for the whole game, so someone like LeBron James could play forty-eight minutes and decide an outcome by himself. Hockey is more of a team sport. The last two seasons’ league MVPs have been from the Edmonton Oilers, but that hasn’t helped them win because a superstar forward like Connor McDavid will likely play only between eighteen and twenty-five minutes in a regular-season game. This means that there are thirty-five to forty minutes in a game when star players are off the ice. Thus, they need to rely more on the other players.

In terms of procuring those players, it becomes more difficult in places like Alberta and Ontario, where taxes are higher and take-home pay is much lower than in, say, Florida or Texas, where there’s no state income tax.

Right now, only seven of the thirty-two teams in the NHL are Canadian. The league has added new teams every few years, the most recent ­being the Seattle Kraken this season. Do you think there’s room for expansion in Canada?
The NHL is a gate-driven league, meaning that—unlike in the NFL, MLB, and NBA, which make most of their money from television contracts—the majority of revenue comes from game attendance.2 Having a strong local fan base to fill an arena is key. There has been talk about getting a second team in Toronto. There has also been talk about returning to Quebec City, but there are US markets that would be far more viable—they have more fans there. However, because of the losses that happened last year as a result of COVID-19, I don’t think there’s going to be an appetite for another expansion anywhere for at least a few years.3

Do you predict that a Canadian team will win the cup again any time soon?
I think, eventually, you will see a Canadian team win. Statistically, it should happen. Oakland Athletics executive Billy Beane, of Moneyball fame, has talked about how you can use all the stats in the world to develop your team over a season, but when you get to a playoff series, all bets are off. A bad play, a bad bounce, a hot goalie—all of that can create a situation where it’s not the best team that’s winning, it’s the team that has the most luck.


1. Prior to the last Canadian Stanley Cup victory, the longest period between a Canadian team winning was six years. Canadian teams have won a total of forty-nine Stanley Cups since the NHL was founded, in 1917.

Forbes, the New York Rangers had the highest revenue in the league, at $225 million (US), for the 2019/20 season, followed by the Toronto Maple Leafs.

As told to Sam Riches. This interview has been edited from two conversations for length and clarity.

William Foster is a professor of management at the University of Alberta and a long-suffering fan of the Edmonton Oilers.
Irma Kniivila