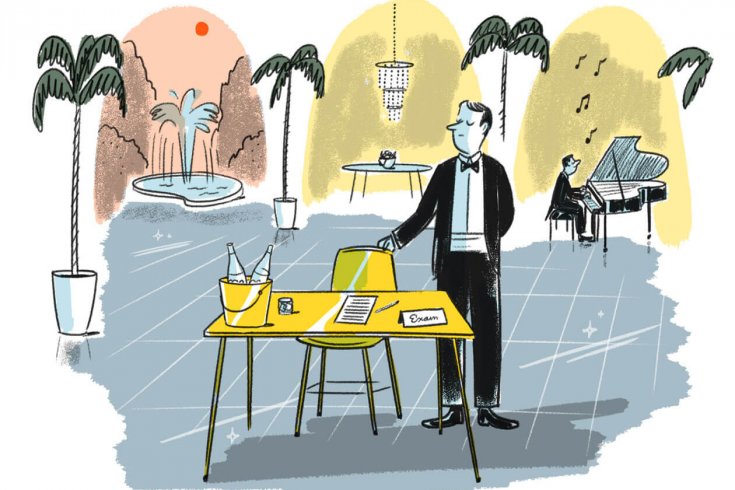 Colleges and universities from St. John’s to Nanaimo will be welcoming record numbers of students with disabilities this fall. In some cases, these new students will be navigating campuses in wheelchairs or with service dogs. But many disabilities carry no outward signs. These “invisible disabilities” may include depression, anxiety, and attention-deficit hyperactivity disorder (ADHD).

To level the academic playing field, schools offer what are called accommodations—which may involve supplying hearing-impaired students with listening devices, for example, or providing anxiety-afflicted students with extra time on assignments. Our society’s understanding of such disabilities is far more advanced today than it was just a few years ago. But the rise in students presenting with invisible disabilities has also created a backlash in some quarters.

What will stop competitive students (or their parents) from asking family doctors to approve dubious accommodations?

On June 20, University of Calgary business law professor Peter Bowal authored a National Post commentary about a student who’d received academic accommodations. “He rarely attended class that week,” Bowal writes. “And why should he? Using paid note-takers was but one of eleven accommodations made for him, most of which I was required to put in place . . . . He goaded me about all his rights and harassed and threatened his way through the [course].”

Bowal later asked a university administrator to channel students with similar disabilities away from his one-week intensive course and into the less demanding thirteen-week version. But, according to Bowal, the official “dismissed” his concern, saying, “The human-rights people would be all over that,” and explaining that “teachers are supposed to give [students] what they want and keep them happy . . . . Rigour and discipline belong to another era.”

Other academics share Bowal’s sense of powerlessness. University of Ottawa English professor Janice Fiamengo was called before an Ontario adjudicative tribunal after a student claimed she had failed to comply with protocols that allowed for customized exams. “There is definitely a shared frustration amongst some of my colleagues,” says Fiamengo. “Whoever comes with whatever request, no matter how outrageous, it seems to be granted.”

I recently gained first-hand knowledge of this issue when a law professor at a Toronto-area university denied my own son a four-day extension on a course assignment—an accommodation the university had approved because of his learning disability. It took four weeks and many calls from two levels of university staff before the professor relented. We later received a written apology from the provost.

I don’t agree with how the professor dealt with my son. But I do understand his general sense of frustration. Most schools are still finding their footing in this area. In the meantime, faculty pushback should be expected—and even, in some cases, welcomed—especially as disability accommodations move into uncharted territory.

On most Canadian campuses, students applying for mental-health and learning-disability accommodations typically are required to submit to a full psycho-educational assessment—a process involving interviews with a psychologist. On this basis, university disability specialists decide which requests are reasonable, then customize an accommodations plan. Professors are informed of what’s required, but the diagnoses remain confidential.

This system may now be thrown into question thanks to fallout from an application filed with the Human Rights Tribunal of Ontario by Navi Dhanota—a PhD candidate in the critical disability studies program at Toronto’s York University. Dhanota had refused to provide school officials with details of her mental-health disability—or even to identify what that disability was—and so gave the school no opportunity to perform any kind of assessment.

Dhanota’s case sets a controversial new precedent for all universities.* She had set out to remove barriers and reduce stigma so that vulnerable students with mental-health issues could more easily get help—important goals. However, the ramifications of her tribunal win have left some, including me, asking whether our good intentions have gone too far.

Under the standard upheld by the tribunal in her case, a student need only present a document from any licensed doctor, even a GP, confirming that some sort of mental-health diagnosis exists; a description of the general issues involved; and a set of accommodations that university disability staff would be required to implement.

According to Allyson Harrison of Queen’s University—an expert in the area of disability accommodations—physicians don’t receive any standardized training on how impairments play out in higher education. She says that several physicians have told her they just ask students what they want and then write it down. “That’s not fair,” she tells me. “That’s not equitable, and it’s not informed research.”

As the mother of a son who was diagnosed with an invisible disability as a preschooler, I’ve run the gauntlet of psychologist visits, parent/teacher meetings, and playground bullies. I understand Dhanota’s struggles and applaud her goals. But I also see problems with this amorphous new standard for disabilities.

First off: Why would professors have confidence in mental-health accommodations (justified or not) if the underlying diagnosis has not been considered by their own on-campus disability professionals? If there’s a credibility issue now, imagine what’s to come.

What will stop competitive students (or their parents) from asking family doctors to approve dubious accommodations? (Johnny never learned sound study habits. So, naturally, he has “anxiety” about school and now requires double the time for all exams.) The potential for abuse is vast.

Without oversight from qualified professionals, suggested accommodations take on the quality of a wish list: reduced course load, preferential seating, a buddy notetaker, a scribe for exams, specialized computer equipment, distraction-reduced environments. Do we really want to raise a generation of young adults who feel entitled to such accommodations?

Harrison told me about a visit she recently received from a Queen’s student and her mother. Both had a congenital malformation whereby some fingers had fused together—the mother’s condition being even worse than her daughter’s. When Harrison marvelled at all that the young woman could do, she replied, “I grew up with a mother [who] said, ‘If I can do it with three fingers, you can do it with five.’” Harrison agrees that it’s empowering when students are supported through accommodations—but that they should be pushed to do as much as possible for themselves.

The approach taken at Carleton University’s disabilities-services office—the Paul Menton Centre (PMC)—has made it a leader in its field. The Ottawa-based university maintains clear thresholds for accommodations. PMC workers build trust with faculty by inviting feedback and avoiding unilateral dictates. Like Dhanota, PMC director Larry McCloskey believes that a growing number of vulnerable students—even those without formal diagnoses—need access to help. But he says there’s a better way to provide that than by opening the accommodation floodgates.

For five years, Carleton has been working hands-on with any student who feels academically or psychologically overwhelmed—including those without an approved accommodations regime. Through the school’s From Intention to Action (FITA) program, students commit to twelve weeks of meetings with mental-health interns and staff coordinators. Similar projects are underway at the University of Toronto and Humber College. Dr. David Goldbloom, former chair of the Mental Health Commission of Canada, has said that a system like FITA should be on every campus across Canada.

As Steve Silberman, award-winning author of NeuroTribes: The Legacy of Autism and the Future of Neurodiversity, told me, “By embracing atypically developing students, we’re actually inviting a truer reflection of the best of our society—not necessarily the people who’ve had the easiest lives, but the people who are able to see the world from different angles.”

The challenge for school administrators is to help every qualified student get an equal chance to participate—while remaining true to the academic tradition at the heart of their mandate.

*An earlier version of this article incorrectly stated that the Human Rights Tribunal of Ontario ruled in favour of Navi Dhanota. Instead, all parties agreed to a settlement. The Walrus regrets the error.