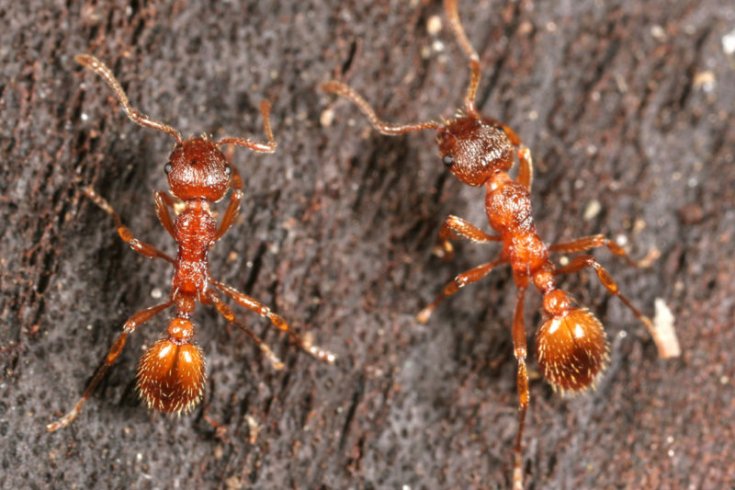 In the backyard of a house in an affluent North Vancouver neighbourhood, the sun glints off a red lawn mower, abandoned midway through the job, close to an unused trampoline. Rob Higgins stoops to comb a pencil through the shorter grass. What lies beneath the ground is tiny, but a massive headache for the humans in the habitat.

An entomologist with Thompson Rivers University, Higgins has driven from British Columbia’s Interior to confirm the suspected invasion of European fire ants. Within seconds, the pencil he has been waving infuriates his target: dozens of red ants about the size of a rice grain climb blades of grass, battle ready, inducing us to back away. Neither of us wants to suffer their wasplike sting. (The ants also bite, but only their sting contains venom, which can cause a painful allergic reaction.)

Earlier in the day, the homeowner abandoned his mowing after six stings. Two years ago, when he and his family moved in, he discovered the insects and called city officials, who in turn called Agriculture and Agri-Food Canada, who called the ant specialist. (The homeowner asked not to be identified, because his neighbours are angry with him for going public about the community’s ant problem.) While Higgins examines the nest, the man strolls into his backyard. “Have you ever been bitten? ” he asks. The scientist has, and a half-hour later, when he’s in a neighbouring yard waving the pencil again, he jerks his hand back—too late. A red welt erupts where an ant has stung him.

European fire ants are not native to Canada; they’re not even strictly European. They’re Eurasian, ranging from Ireland to Siberia. In their home environment, they live in an unforgiving world of competing ant species, deadly pathogens, and predators that control their populations. Not so in North America. Myrmica rubra muscles out native ants, competing for food sources, intimidating them, and, occasionally, dismembering and eating them in full-on ant wars. Territory claimed, the invaders colonize, building 1.5 nests per square metre. Each nest contains up to sixty-eight queens and 15,000 workers. The insects have a sweet tooth and like to feed on honeydew, otherwise known as aphid excrement. Aphids—themselves a garden nuisance—can, in ideal conditions, double in population every three or four days; fire ants carefully tend and “farm” them, to ensure an abundant food supply.

Ants in the Arts

Sometimes, to create you must first destroy

In Chris Trueman’s Self Portrait with Gun, the California artist depicts his smiling five-year-old self (modelled by his little brother) in a cowboy hat and boots, holding a .22-calibre rifle. Trueman, who usually works in abstract, said he wanted to represent an innocent child’s first wilful attempt to attack “intelligent life”—and his first stomp on an ant nest in his backyard. Executed in a style akin to pointillism (“executed” being the operative word), the self-portrait is composed of 200,000 harvester ants, which the artist carefully arranged on Plexiglas using tweezers. He ordered the live bugs in batches of 40,000 from a seller of reptile pet food and killed them on arrival. However, he became overcome by guilt, so he stopped the project midway for more than a year. In 2005, he finally finished the work, explaining to interviewers that he didn’t want the ants to die in vain.

European fire ants emigrated to Massachusetts more than a century ago, probably hitching a ride on imported plant material. The first province to report their presence was Quebec, in 1915, and since then they have spread to Ontario, Nova Scotia, New Brunswick, Prince Edward Island, and Newfoundland. In BC, they are thought to have arrived about two decades ago but were not officially identified until 2010. Though infestation is widespread in southwestern BC, reporting has been spotty, making the problem more difficult to address and contain.

Under the trampoline, the ants have built about ten nests, a serious deterrent to play. (In Maine, where they have also invaded, several municipalities have installed rubber mats and other barriers in playgrounds.)

Holding tweezers in one hand, Higgins lifts a rock, and the ants underneath hoist pupae almost the same size as themselves and scatter. A few unfortunate ones end up in a plastic vial filled with alcohol. Higgins will mail them to Finland for genetic identification, to determine their relation to ants in other parts of North America and to their Eurasian ancestors. The insects’ creep across the country troubles him. “If the ant is not dealt with and becomes established,” he says, “we’ll likely have backyards that are off limits for a big part of the year.”

His next stop is a six-hectare community garden in Burnaby, not far from the Vancouver International Airport. Eleni Harvalias, a gardener with a plot there, called him after she was stung and experienced an allergic reaction. Now, when she gardens, she packs antihistamine pills and creams, and wears long sleeves and pants with gaiters at the wrists and ankles, pulled over boots. “This is my sanctuary,” she says, gazing at an asparagus patch as Higgins shovels dirt aside, confirming that European fire ants have moved in. “Well, it was my sanctuary.”

In June, the Invasive Species Council of BC hosted a meeting in Burnaby with provincial officials, the Canadian Food Inspection Agency, and representatives from affected municipalities and districts, to work on a plan for containing the ants. At the federal level, however, the government does not consider them an invasive species, and there are no efforts to control their spread. “Individual homeowners can’t deal with this ant successfully. It’s the wrong scale entirely,” Higgins says.

Back in his garden, the homeowner concedes that his yard is a lost cause. Even digging out the dirt for a swimming pool would affect someone else. Where would that dirt end up? A community garden? “The ants don’t come in the house,” he says. “So I’m thinking, ‘You don’t come in my house, I won’t destroy yours.’ You know, it’s live and let live.”

Jude Isabella wrote Salmon: A Scientific Memoir, due out in October.