Bring Back Cracker Jack | The Walrus
Skip to content 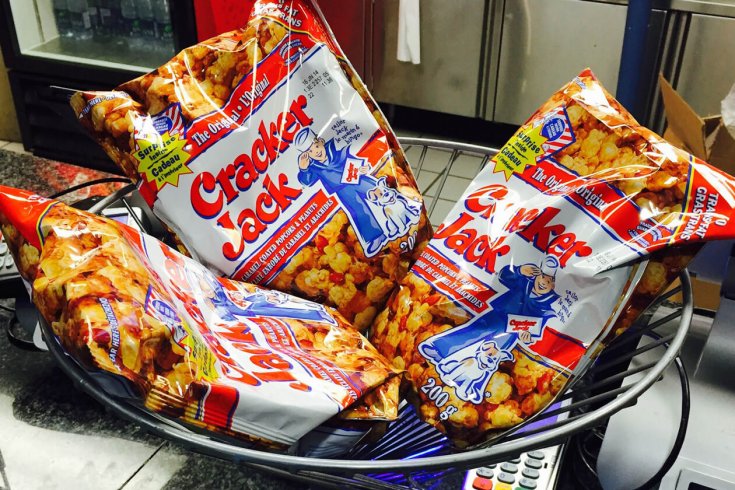 I haven’t been a baseball fan for long. Growing up, I joined soccer teams and my dad and I played catch with a football. I never went to ball games and rarely watched them on TV. But I can remember the moment I converted: It was April 6, 2014, a cool Sunday in Toronto, at the last game of the home-opening, three-game series between the Blue Jays and the New York Yankees. This was my first major league game. In a flash, a pitch was thrown, a crack echoed as bat hit ball, and a white speck careened foul, high into the air towards my section. We leapt to our feet, dozens of hands reaching for the prize in the sky. My fingers grazed something—another hand, most likely—and the ball sailed just over my head. I turned, looked down, and there it was, spinning like a top under my seat.

You would think that this moment, nabbing a fly ball at my very first game, would make me an instant fan. But it didn’t. I was already won over the moment I pushed through the turnstiles and entered the stadium, smelled hotdogs and popcorn, heard the shouts from the aisle vendors, and watched the players position themselves around the diamond. From the first game to the many since, it isn’t the sudden ecstasy of a home run but the subtle moments of tradition that stand out: like when a pitcher relinquishes the ball to his manager after being pulled, teammates huddling around in support, and the manager hands the ball to the incoming pitcher like the passing of a sacred torch.

I feel part of the game’s enduring legacy, its intimate traditions, and its continuity. And oddly, for someone with next to no connection to the game, no deep history, and no memories that bubble up, I enter a ballpark and feel nostalgic. The old-timey uniforms, the umpire’s call, the seventh-inning stretch—it feels like time travelling to a place that values its past. For me, nothing symbolizes this more than Cracker Jack. And no, the legendary caramel corn is not plural. It’s not “Buy me some peanuts and Cracker Jacks,” regardless of what everyone sings. Cracker Jack is a singular entity—a sublime conglomerate of molasses-flavoured, caramel-coated popcorn and peanuts, a foodstuff more synonymous with a sport than any other.

It was brothers Louis and Frederick Rueckheim who founded the snack, and began selling their concoction in 1896 under the tagline, “The More You Eat, the More You Want.” Cracker Jack first appeared at a major league game in 1907, and the beloved prizes were introduced five years later. But the snack’s appeal has been maintained for more than a century by Jack Norworth’s 1908 classic, “Take Me Out to the Ball Game.” In his book Baseball’s Greatest Hit: The Story of Take Me Out to the Ball Game, Tim Wiles writes, “Did Norworth work any back room deals with Cracker Jack so as to include them in the song? We don’t know. We do know that Cracker Jack rhymes with ‘never get back’ and for songwriters, it’s all about what rhymes.” Even if you weren’t a fan of baseball as a kid, who couldn’t sing by heart sport’s most iconic song?

After the seventh-inning stretch of that first game, I had to buy a bag. It became something of a ritual, especially after one time when, immediately upon returning to my seat with a bag in hand, catcher Russell Martin hit a three-run homer to seal the win. On another occasion, I saw a fan catch a fly ball using a bag of Cracker Jack like a mitt. I’ve sat near two fans in their seventies who spent several entire innings passing a bag back and forth instead of talking.

In early July, I caught a game of the hotly anticipated rematch of last year’s American League Championship Series between the Blue Jays and the Kansas City Royals. It was my birthday and Cracker Jack was to be my cake. But over the spring I had noticed it was becoming harder and harder to find it at the Rogers Centre, and after scouring the entire bottom level for a bag, I returned empty handed and dejected to my seat. A new kind of caramel corn had usurped its place at the concessions: something called Spudniks.

When I investigated further, I found Cracker Jack was only being sold on the top decks, and I initially thought that old faithful was being marketed solely to those in the cheap seats. But at a game three weeks later, I couldn’t find a single bag of Cracker Jack anywhere in the entire stadium. Gone was the familiar, red-and-white packaging, replaced with the trendier look of Spudniks. Gone was Sailor Jack and his dog, Bingo, replaced with some futuristic human–dog combo wearing astronaut helmets. The real kicker was hearing the vendors who stroll the aisles still using the beloved Cracker Jack name, with all its history and status, to market the new caramel corn. And while Spudniks tastes fine, it lacks not just the candied peanuts and the prize but Cracker Jack’s sweet, thick coating of tradition.

Buy me some peanuts and Spudniks? Jack Norworth would roll in his grave.

Two concession cashiers confirmed that Rogers Centre had been “phasing out” the most storied snack brand in sport. And now, it’s gone. This isn’t the first time a major league ballpark has attempted such a swap: In 2004, Yankee Stadium replaced Cracker Jack with Crunch ’n Munch. The public outcry was so deafening that they were forced to switch back.

On Tuesday evening, I stood in nearly the same spot as my first game, along with approximately 50,000 fans that packed the Rogers Centre for the do-or-die wild card game between the Blue Jays and the Baltimore Orioles. As the game went into extra innings, tied 2–2, before the tension was exhaled by Edwin Encarnacion’s walk-off homer, something was missing. I sure could’ve used a bag of Cracker Jack to anxiously munch on. And this Sunday, we will welcome the Jays back to Toronto for the first home game of their American League Division Series. But will we win or lose? Will Encarnacion or Jose Bautista re-sign with the Jays for another season? Will everything feel the same when we walk back through those turnstiles next spring?

Author and sportswriter Stacey May Fowles said that baseball is a game of “long pauses punctuated by tiny miracles.” For me, there’s a tiny, subtle miracle at the bottom of a bag of Cracker Jack. And I don’t mean the prize—I once got a sticker of a butterfly—I mean the joy of eating your way through history, through baseball, in all its sickly-sweet glory.

So, Rogers Centre, bring back Cracker Jack, for the old fans and for the new, and restore its place where we all know it should be.